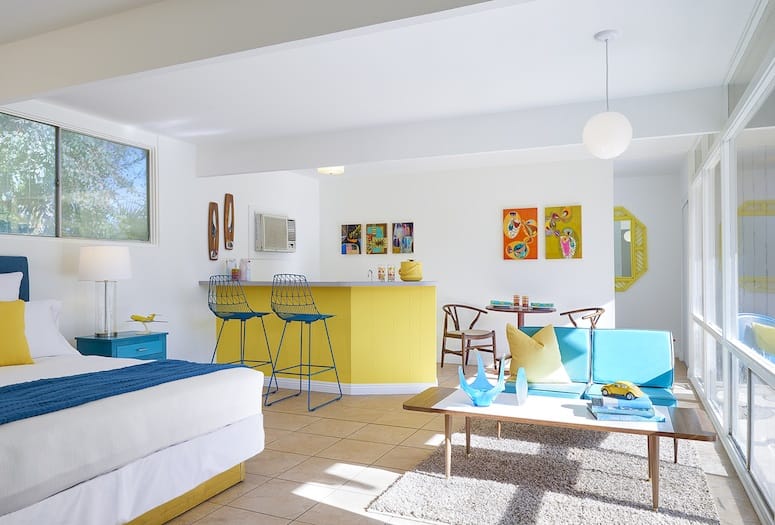 When The Monkey Tree Hotel opened back in 1960, its original rack rate card was designed with the classic midcentury color combination of yellow and teal.

Coincidentally, that exact color scheme played a prominent role in the renovation undertaken in 2016 by the property’s current owners, Gary and Kathy Friedle. The pool area has yellow umbrellas and the existing furniture was refurbished and painted the same color. The doors to the guest rooms, as well as some original Salterini chairs, were painted teal.

“It was a complete coincidence that we picked yellow and teal too,” says Kathy. “We had not seen the rate card until we finished with our colors, which we based loosely on the Frey House II [since the resort was designed and built by Albert Frey].”

The resort’s founders and original owners, Lorin and Dale Rowley, pose in the hotel’s dining room and by the pool.

Frey was known for tracking the sun over the course of a day to best site his buildings and, according to the Friedles, he specifically situated the resort’s courtyard and pool so that guests could enjoy a dramatic, panoramic view of the San Jacinto Mountains.

Local residents Lorin and Dale Rowley, who owned the property until 1988, commissioned the hotel. During their stewardship, celebrities such as Lucille Ball and Desi Arnaz, Bob Hope, and Spencer Tracy and Katharine Hepburn frequented the resort.

And legend has it that Frey once relayed a story that he had seen Secret Service cars parked out front, which led to a rumor that John F. Kennedy had a Palm Springs rendezvous with Marilyn Monroe in 1962. Their alleged meeting took place in a room that’s now dubbed the Presidential Suite, which has its own fenced yard and private entrance from the parking lot — all the better for entering and exiting unseen.

In 1988, a doctor from Orange County purchased the hotel and transformed it into a gay men’s resort dubbed The Legacy. By 1995, the hotel had again changed hands — and strategy — when Tom and Mary Clare Mulhall renamed it The Terra Cotta Inn and it became a nudist resort for couples. The Mulhalls’ ownership extended until 2015 when the Friedles purchased the property and began a meticulous restoration, reestablishing it as The Monkey Tree Hotel.

All of the rooms are furnished with vintage pieces purchased locally and some of the hotel’s original features remain, including those blue Salterini chairs scattered across the property and the grasscloth wall covering and fireplace in the resort’s dining room. One of the rooms, known as The Jungle Room, retains its original leopard print wallpaper and Roman bathtub.

The Jungle Room, circa 1960 (on the left) and today, retains its original Roman bathtub.

As the Friedles were finishing up their renovation in January 2016, Pam Hicks, one of the Rowleys’ daughters, stopped by the property and later sent the Friedles photographs from the era when her parents owned the hotel.

Kathy also found an article that appeared in Palm Springs Life in January 1967 that outlined the hotel’s original rates and amenities:

While the room rates and amenities may have changed since the Rowleys opened this 16-room boutique hotel, the property continues to attract attention for its architectural design. Last fall, the Palm Springs Modern Committee gave the Friedles a PS ModCom Preservation Award for Best Commercial Renovation project of 2016. 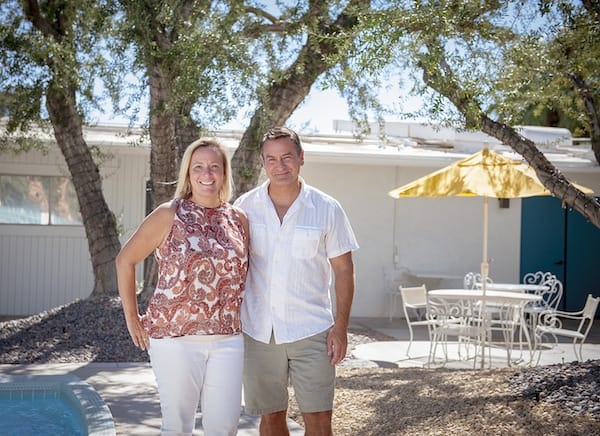 Current owners Gary and Kathy Friedle renovated The Monkey Tree Hotel back to its midcentury glory.