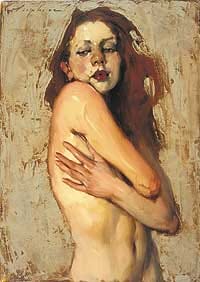 A conversation between a man and a woman in a dimly lit tavern, a mother helping her daughter fix her flowered dress, an embrace between two lovers. Where you might expect passionate expression, solemn melancholy prevails. This is how Malcolm Liepke sees the world — a perspective that harkens to Henri de Toulouse-Lautrec and Diego Velázquez but reveals contemporary sensibilities that command widespread attention. With sold-out shows from Hong Kong to New York, Liepke, 50, appears an improbable leader in an American resurgence in figurative realism.

“I’ve always loved the human figure,” he says from his converted 1915 schoolhouse home in Minnesota. “It speaks to me in a way that landscapes don’t. My work has always been strongly emotional, driven by people and relationships.”

Like the works of several old masters, Liepke’s canvases reflect common human experience: ordinary folk in everyday situations. Also like the masters, his paintings are timeless, accounting for their popularity.

The paint is still drying on the pieces he’ll show starting in February at BuschlenMowatt Galleries in Palm Desert. The canvases, consistent with their subdued subjects and palette, are bold in stroke but gentle in composition.

“The way I paint technically stays relatively the same, but I got a little finer with my brushwork,” he says. “As for subject matter, the range of human dilemma is infinite. Right now, I’m exploring relationships — doing a lot of couples and [home] interiors.”

Liepke was drawn to the genre in his late teens, when abstract and conceptual art ruled the day — at least in the United States. “In school, you try all sorts of styles,” he says. “But you have to paint from your heart. I didn’t feel as strong about abstraction as I did with figurative work. This is what I really wanted to do and follow. Once you make that choice, you have to stick to it no matter what, because you love it, and that comes through in the work.”

To be sure, Liepke dropped out of Pasadena’s Art Center College of Design after three semesters, moved to New York, and began collecting awards for his illustrative work published in Time, Forbes, and Sports Illustrated. Meanwhile, he absorbed museum collections with works by Toulouse-Lautrec, Velázquez, John Singer Sargent, Edgar Degas, and others. He learned their color and compositional techniques and began to refine his own vision.

Indeed, Liepke infuses the somber beauty of his subjects with a sense of history, rendering his canvases as timeless in nature as those of his famous teachers. “If I look at a Rembrandt, the clothing is certainly different now, but the people are the same. The emotional connection you get by looking at someone’s face is what inspires my work.”

It’s even simpler than that, he concedes. Liepke’s ideas come from feeling life — observing people at cafes, in movies and on television, and in magazines. “I watch and make mental notes when I see something and think it will make a nice painting,” he says. “I like to get on certain themes and explore them for some time.”

The secret to his canvases lies in their honesty — a celebration of the common man and woman: laborers, seamstresses, and lonely souls seeking companionship or at least conversation. “Their problems are universal,” Liepke says. “I tap into the human truth that makes music valid hundreds of years later.”

Liepke’s knowledge of the human figure and effect of light enables his loose, bold, and confident brushstrokes, and encourages subtlety while communicating the vitality of human spirit. He shows a complicated world simply and balances charm with emphatic strokes that challenge the viewer to interpret for narrative meaning.

Leipke’s elegant paintings appear in the collections of the Brooklyn Museum and the Smithsonian Museum, as well as many prestigious private collections. They even inspired Donna Karan’s fall 2002 fashion line.

In his first local exhibition, Liepke will show between 20 and 30 new works beginning Feb. 7.