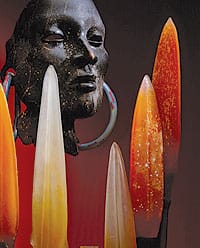 If you want bones and skeletons, peek into Palm Spring Desert Museum’s natural science wing. If you want cutting-edge studio glass — textured and colored to express the spiritual, contemplative dimension to these artifacts we consider primitive— turn to the museum’s Annenberg Art Wing. William Morris Glass Installations: Myth, Object, and the Animal, the largest exhibition to celebrate the work of one of the medium’s contemporary masters, runs Feb. 4 through March 16.

The 8,500-square-foot space, divided into separate galleries, commands your full attention with hundreds of interpretative glass sculptures of artifacts that archaeologists would find in Native American, ancient Egyptian, and African civilizations and cultures. Two of Morris’ installations consume entire galleries. Cache (1993) unfolds in the center of one darkened gallery, its mammoth-sized tusks situated in a 36-foot-long row and populated with blown-glass skulls, bones, and Stone Age tools that transcend literal practicality and inspire you to contemplate your place in time and connection to nature.

“Approach it with as little thought as possible,” Morris suggests from his Seattle home. “I’m dealing with a subject [nature] that is infinite. We’re all connected to it. [Viewers’] first impressions are most interesting: apprehension, fear, inquisition — it’s an exploratory for the soul and the heart.”

The other large-scale installation is Artifact Panel (1998) — what James Yood, professor of contemporary art theory and criticism at Northwestern University in Evanston, Ill., describes in the exhibition book as “an inventory of impulses, an encyclopedic assemblage of objects that now appear divorced from their original functions, pinned to the wall in the customary display strategies of modern museology.”

“The best part to me,” Morris says, “is when people stand in front of it and find the one piece they love most. It’s no different than looking at a butterfly collection. It’s that simple. The soul finds it in the huge array and delineates it like a laser beam.”

But look not for historically accurate representation, he intones. “I’m not interested in the academics. I’m interested in the myths and the story of it. Archaeologists need to answer questions and explain. I like the questions themselves. I don’t stick to the facts. I’m more likely to make a fanciful story out of it.”

Other, smaller, installations include Crow and Raven, featuring birds perched atop vessels that look like cracked or shattered Native American pottery; Trophy Panel, a 25-foot-long installation similar in concept to Artifact Panel; Adorned Burial, a skeleton with parts decorated and surrounded by pots, evoking the art, culture, and religion; Man Adorned, emphasizing the faces of men from many cultures; and Cinerary Urns, by far his most personal and intimate body of work. Morris created the urns in late 2001 and early 2002, when he was supposed to be on a sabbatical. The death of his mother and the terrorist strikes of Sept. 11 compelled him to work. “The idea of death and loss — what I was feeling — manifested in form,” he deadpans. “[The urns] came along because friends kept dying, and their friends and families wanted them. I think it’s wonderful that they’re actually used. That was my intent. The installation was more of an afterthought.” Four Cinerary Urns pay homage to Sept. 11.

Several individual works from Morris’ archive also appear in the exhibition, which was curated by Katherine Hough with the artist.

At first glance, Morris’ sculptures fool the eye, as they appear to be actual artifacts, clay vessels, and other natural materials. But up close, their translucency reveals a smooth, seductively expressionist glow. He achieves his surface textures by etching, acid washing, and sprinkling powered glass and minerals onto the blown surface. The combination of techniques gives his work a breadth of diversity uncommon among studio glass sculptors.

“I’m continually amazed by the pieces he presents,” says Leisa Austin of Palm Desert’s Imago Galleries, which has represented Morris for 12 years and will show one of his newest series, Ídolos (Spanish for “idols”), from Feb. 21 through the end of March. “That talent has allowed him to take a more innovative approach from an ancient technique. He has profound passion for his work. He’s intense, extremely focused, and has a long-range vision. All the series are related in a way; everything is thematic.”

The works in the Imago show feature small figurative elements, caricatures of myths and idols, as well as individual pieces from Morris’ new, more impulsive Mazorca series, inspired by his time spent in Mexico (mazorca is the Mexican farmer’s word for corn on the cob). “It started with suspended bead pieces and led to something else,” he teases.

Indeed, inspiration often comes from Morris’ own globetrotting and bow-and-arrow hunts. But he rarely expects to go into his studio with an idea and come out with a sculpture that reflects that original vision. Rather, he works with a crew of about 10 in his hot shop, with four personal assistants, as well as a cold shop for cutting and grinding. “I’m not interested in control,” Morris says. “I believe in the collective unconscious, working together, being receptive. People want that myth of the paragon, but that’s not the truth. It’s like a dynasty where the timing was such and the people were such that perpetuate a situation in a period of time. The environment, timing, personalities, and their philosophies involved … the product is a manifestation of that.”

The U.S. art scene seldom catapults a worldwide movement — although we take credit for abstract expressionism and pop art. Yet, the United States — particularly the Pacific Northwest — has emerged the improbable epicenter of contemporary studio glass art, a movement widely believed to have started in 1962 with Harvey Littleton’s series of seminal workshops at Toledo Museum of Art. Littleton taught Dale Chihuly, who became the world’s best-known glass sculptor. Morris worked as Chihuly’s gaffer (master glassblower) in the early 1980s. Their common denominator was Pilchuk Glass School in Stanwood, Wash., where each learned and taught.

“I admire [Chihuly] immensely,” Morris says. “I love how different our work and our lives are. It goes to my theory that we come from the same earth and look at the variations that exist from the same point of origin.”