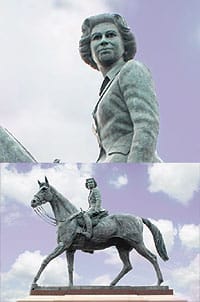 It’s been said that after you speak with the queen, you remember neither what you said to her nor what she said to you. Philip Jackson — the British sculptor commissioned to cast Her Majesty’s likeness for her Golden Jubilee — recalls only that Queen Elizabeth II was “quite pleased” when she unveiled the 12-foot-6-inch statue last October at the Crown Estate.

Meanwhile, U.K. magazine Hello! reported that the queen could “barely hide her pleasure, breaking into a broad smile, as she unveiled the first public statue of herself in Britain.”

Jackson is a modest man. “I was quite relieved,” he says during a telephone interview from his home in Middlesex. “It’s one of the most difficult things to do — to create a sculpture and then have it unveiled.”

Indeed, pressure mounted early, as he was one of only four sculptors invited to submit a design. Tremendous responsibility came with the selection of his maquette — the model he presented along with his sketch of the sculpture situated atop a plinth at the peak of Queen Anne’s Ride in Great Windsor Park west of London.

The commission presented plenty of creative and logistical obstacles. The most difficult was access. “You have to go through 70 people to get to the queen,” he says. “Once you get to her, she’s quite easy to work with — very cooperative and helpful. I had her riding around. I couldn’t have asked for more.”

However, the commission called for the monarch depicted in the middle of her reign — the 1970s. Jackson scoured boxes of photographs at the Royal Archive at Windsor Castle, studying images of the queen, as well as different horses. “The queen is probably the best known person in the world, and everyone has an image of her and has expectations,” he intones.

Jackson responded with the bronze Golden Jubilee Sculpture of the queen on horseback, turned in her saddle to look toward nearby Windsor Castle, one of the royal homes on the Crown Estate.

“As well as being a fitting tribute to Her Majesty, it will be an enduring and affectionate reminder of an historic milestone in her reign,” Ian Grant, chairman of the Crown Estate, said in a prepared statement. “It will provide much interest and pleasure to the two million or so visitors who come to the Great Park every year.”

Jackson has been a prolific sculptor of commissioned work since Baroness Thatcher unveiled his Falklands War memorial sculpture, The Yomper, at Portsmouth in 1992. Each presents great challenges; he immerses himself in his subjects’ history, reading every word and viewing every photograph he can get his hands on. He created The Young Mozart (1994) to commemorate the bicentenary of the composer’s 1764 visit to London — where the child prodigy composed his first symphony. “I consulted with musicologists and visited the Mozarteum in Salzburg,” he recalls. “It was immensely interesting meeting people I’d [otherwise] never meet.”

A more challenging commission, The Wallenberg Monument, came two years later: He would immortalize Raoul Wallenberg, the Swede who helped save 100,000 Hungarian Jews from Nazi death camps until Soviet authorities arrested him in January 1945. Jackson wondered, “How do you do justice and show the extent of his extraordinary heroism?” His bold answer stands near Marble Arch in central London, close to a Jewish synagogue and the Swedish embassy, ensuring the legacy endures for future generations.

Other commissions range from Christ in Judgment at Chichester Cathedral to Sir Matt Busby, the Manchester United soccer hero, at Old Trafford, the team’s home ground.

When he’s not sculpting commissioned work, Jackson creates gallery pieces, which have been in demand in the decade since he unveiled his masked and robed Venetians, some of which are exhibited at Denise Robergé Art Gallery in Palm Desert, Jackson’s exclusive U.S. representative.

“Public sculpture must be understood — it’s more simple and obvious,” he says. “The gallery pieces go to a different audience.”

Where historical figures dominate his commissions, a good story or an operatic score can inspire his gallery pieces. The idea for the Venetian series came while working on a commission for a ship being built in Italy. “I was asked to go out and help with the installation, and the shipyard was in Mestre in the Venice Lagoon,” he says. “The ship was towed through the Giudecca Canal to the Arsenale, and this was my first sight of Venice. Seeing the city through the mist was extraordinary. I fell in love with the place and its history, and I took every opportunity to visit museums and galleries. I was intrigued by 17th- and 18th-century paintings of the great artists of the day — Canaletto, Bellotto, Guardi, Longhi — that showed people wearing masks.” In this small city, the mask afforded anonymity. “But you could differentiate between the male and female figures,” he says.

Likewise, Jackson’s impressionistic interpretations suggest what the figures are thinking. And most — monumental or maquette — rise from the natural surface rather than from plinths, which Jackson says feel artificial or ornamental.

Moreover, his signature textures help viewers read the scultpures. The most punctuated features are the masks (often polished bronze) and the detailed hands, which Jackson casts in different textures to lead viewers’ eyes up the body.

These pieces, like his commissioned works, hold profound meaning — but also a visceral message. For example, Dogerina’s Progress — a monumental installation of seven triangular Venetians arranged in a triangular configuration — “is about what happens when a certain person progresses,” Jackson says. “The people walk behind them and take their position according to their rank. The geometric continuity gives the sculpture strength, which people can feel because they can walk between [the figures].”

Reluctant to describe his new pieces, slated to debut in Palm Desert in February 2005, Jackson hints at the ecclesiastical — more mysterious figures evoking “a feeling of elegance, dignity, or melancholy,” he says. “Every sculpture says something about the human condition.”