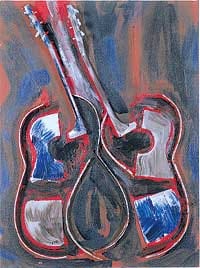 In the quietude of Imago Galleries — where big, open spaces encourage pensive contemplation — the assemblage paintings and fractured sculptures of Arman might appear an aberration amid less jolting, blue chip contemporary artists.

Arman executes art in two ways: A painter first, he creates assemblage paintings that represent his view of his surroundings (New York). A sculptor second, he casts ordinary objects in bronze — chairs, teapots, musical instruments — and then slices and dices them and attaches hinges, enabling viewers to expand them to appreciate their aesthetic possibilities and return them to their literal, practical state.

His first one-man show in Palm Desert — which opens with an artist reception on March 27 — emphasizes the latter. Yes, 75-year-old Arman continues to create with the same air of naughtiness that earned him expulsion from more than one school as a youth in his native Nice, France. “Working is one of the greatest pleasures of my life,” he says from his New York home. “Artists are like soldiers. If you don’t die young, you end up a general.”

Indeed, Arman’s edgy art has stood the test of time. His assemblages of junk material have earned praise in the United States and Europe since the 1960s. More important to Arman, however, his work has consistently represented the New Realism movement he founded with five other artists in France in the late 1950s. “I’ve been faithful to the language,” he says.

“I have many variations. I don’t want to do one thing. I refuse absolutely to go to work and be bored.”

Bored? Not the man who built his name on smashing furniture and filling a gallery with trash off the streets of Paris. Some critics have described his art as angry, even violent.

Arman laughs at the suggestion. “When I break something, I do it with control, like a judo throw,” he says, noting that he knows such control. He opened a judo school in Spain with Yves Klein, another artist whom he met in Nice. Arman, Klein (who died young but is best known for his use of monochromatic color), and Martial Raysse instigated New Realism, a movement that sought to link art to real life more closely than other styles.

For his part, Arman rejected traditional Abstract Expressionism, which ruled in 1949, when he finished his studies at Ecole Nationale d’Art Decoratif in Nice. Arman moved on to Ecole du Louvre to study Oriental art and archaeology before becoming a professional artist. His earliest paintings were in abstract and surreal styles — influenced mostly by Nicholas de Stael. But his first solo exhibition — at Galerie du Haut-Pave in Paris in 1955 — showcased his Cachets, rubber stamp compositions inspired by his own office work and influenced by Jackson Pollock and Kurt Schwitters.

Arman later revealed his obsession for objects in his Allures paintings. “I have a strong feeling for the object,” says Arman, whose father sold antiques (and gave him his first painting lessons).

Incidentally, the exhibition catalog cover for his 1958 Allures misspelled his name. Arman had been signing his work “Armand,” the first of his given name, Armand Fernandez. (He admired Vincent Van Gogh, who omitted his last name when signing his paintings.) At first, Arman was outraged at the error, but he eventually stuck with the shortened version.

In as great a measure as he loves objects, Arman craves quantity. This also traces to his youth. He collected everything — an innate drive that surfaces in his assemblage paintings and sculptures. He showed his first accumulations, Poubelles, at Galerie Apollonaire in Milan, Italy in 1959.

With the confidence that comes with success, Arman — who had been expelled from schools he deemed too socially conservative — spoke out through his art. In 1958, Klein opened an exhibition that consisted of an empty gallery — a statement about the nonmaterial stuff of life. Arman responded in 1960 by filling Galerie Iris Clert with trash from Paris streets, creating Le Plein, or “Full Up” — a statement that refuse objects, assembled by chance, have appreciable aesthetic value.

A year later, Arman visited New York City for the first time to participate in his first museum group exhibition, “The Art of Assemblage,” at the Museum of Modern Art. By 1964, two museums — Walker Art Center in Minneapolis, Minn., and Stedelijk Museum in Amsterdam, Netherlands — exhibited retrospectives of his work. Museums worldwide continue to exhibit his work.

Arman, who became a U.S. citizen in 1973, has lived in New York City for more than 43 years. The urban chaos fueled Arman’s interrogation of objects — severing some, stacking others — torturing them for visual splendor. Once emotionally detached from the circumstances of the objects’ disrepair (a burned car, a sliced violin), the abstract beauty emerges. “New York has had a huge influence on how I see things and what I do in my work,” he says.

Arman’s largest installation, Long Term Parking (1982), is a 65-foot concrete tower consisting of 60 cars in front of a parking lot in Paris. Since the 1970s, he has created mostly for public display. For example, Lucky, constructed with oil drill bits, stands atop a plinth on the Academy Campus in Daphne, Ala.