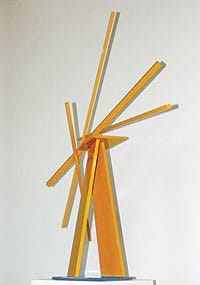 Through wide-open spaces, between towering steel beams connecting in geometrical patterns, an improbable romanticism prevails. John Henry’s massive Constructivist sculptures transcend their tonnage, as well as the real-life experiences that inspire his works. One piece under construction on the three acres adjacent to his 56,000-square-foot studio in Chattanooga, Tenn., soars 101 feet.

The desert’s many Chicagoans might recall his 58-foot Chief (2003) at Pioneer Court on Michigan Avenue — a piece that grew after Henry had seen a variety of Native American headdresses.

However, Henry’s work is abstract — lines in space conceived with Minimalist sensibilities and constructed with a foundation deeply rooted in his mastery of his medium; he insists on integrity of process and materials. He completes his messages by applying automotive finishes, palladium, and gold gilding that trace to his background as a painter.

“A lot of [sculpture concepts] start on restaurant napkins and paper plates, and then go to model phase,” he says, noting that the models are studies rather than maquettes he sells through galleries. “Sometimes ideas work on a small scale but not on a large scale. It’s akin to the Abstract Expressionist process — it’s sometimes hard to get rid of that intuitive desire, to throw a shape out there and see what happens.”

Regardless of scale, his work projects an engineered elegance — a lightness he seems to achieve naturally, as if he has a supernatural sense of structural limitations. Sure, he typically enlists an engineer’s critical eye for large-scale works (public entities that commission his work apply their own structural analysis), but “a lot comes from growing up with my father in construction,” he says. “A lot is instinctive. But whenever there’s a question, I call in an engineer and, if necessary, make provisions.”

His feel for steel allows him to push the medium to the extreme, fabricating linear and rectilinear elements that suggest a moment of suspension that tempts viewers to explore, to identify the source of the outwardly radiating energy. “There’s logic to the pieces,” he says, adding that he also works with aluminum. “If you really look at the pieces, they don’t defy gravity; they use gravity — it’s well-defined logic and why they stand.”

Art critic Peter Schjeldahl, writing for Nathan Manilow Sculpture Park’s exhibition catalog, points to Henry’s Illinois Landscape No. 5 as “an extreme example: the color and disposition of its huge components deny the literal weight of all that material and produce an impression of flying and tumbling. Like paintings, such pieces work best from certain optimum distances and angles of viewing, and the outdoor siting of them is a problem, above all, of ‘framing.’ Framed on its knoll against a brilliant blue sky on a windy day, as was the case when I saw it, Illinois Landscape No. 5 is nothing short of spectacular.”

Months before Henry created an 18-foot outdoor sculpture as the signature piece for his exhibition this month at Buschlen Mowatt Galleries, he scouted the gallery’s location at the corner of Portola Avenue and Highway 111 in Palm Desert, snapping pictures from multiple angles to gain a feeling and a visual reference for the space. “Although I’m not building pieces specifically for that space,” he says, “I want to make sure what I’m doing is going to work in that space.”

The piece outside the gallery was born from the series that started with Chief. Other pieces in the show come from his new Cathedral series, inspired by visits to cathedral ruins in Italy. The aluminum sculptures, of course, show no sign of decay; rather, they reflect “the feelings, emotions, and ambiance of what happens in those places and what grows out of that,” Henry says.

Indeed, the new work appearing in Palm Desert continues the 61-year-old sculptor’s visual dialog. The scaled pieces — practical for indoor or outdoor installation — are fresh and powerful. Although his public commissions earn him worldwide acclaim, collectors waste little time snapping up his garden pieces (12 to 14 feet) and indoor/table-top pieces (18 inches to 3 feet), as well as several wall pieces — all of which appear in the Buschlen Mowatt exhibit. Henry’s “midscale” pieces, like the gallery’s outdoor example, range from 20 to 50 feet and often begin their custodial lives in private hands before being gifted or sold to museums and public entities.

For more than 30 years, Henry has emphasized simplicity of form, linear elements, and restraint in color, yet continually creates nuances that ensure his work withstands the test of time. Although the physical nature of the work allows him to commit to two, sometimes three, gallery shows each year, his larger works appear in numerous public and corporate collections, including the Museum of Contemporary Art in Chicago and the Smithsonian Institution in Washington, D.C.