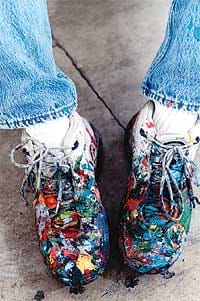 Benton’s Folded Circle and Folded Square Alphabet sculptures were among his first departures from the kinetic art world, which had established his name internationally.

Over the years, the new Constructivist would cast all 26 letters, A through Z, and cardinal numbers, 0 through 9, in geometrically sophisticated Folded Squares. He stopped many times to create other series, such as his Steel Watercolors, One-Legged Tables, Blocks on Blocks, Balanced/Unbalanced, and Plane to Edge.

Yet the Alphabet sculptures continue to challenge him; he recast many after seeing sharper solutions to problems each letter presents. “When you do that many pieces, there will be weak ones,” says Benton, whose fourth book, due for early-2005 release, focuses solely on the Alphabet sculptures. “Over the years, I feel I could do better. I probably redid 10 or 12 pieces. If I live long enough, I’ll probably do them all again. I always told my students that if they’re not willing to throw away their models at the door, get out now. We’re not going to make bookends in here.”

In addition to selected Alphabet pieces, the Imago exhibition will include Benton’s new Botanical and Rusted Indian sculptures.

Benton, who lives in Napa Valley, started the Botanicals during the 1980s — “when I got sick of the Alphabets,” he says. The elongated, banana-shaped, geometrical plants tower with weed-like stems, some of which reach 7-feet in height.

“I’m a vertical sculptor,” he says, noting the use of balls as seeds “to deal with the hereafter of the plant — they all have little balls and one big ball. Some of the little balls hang on the edge, which implies motion and probably goes back to my kinetic art.”

His Rusted Indians were inspired by one of his watercolor paintings — and they’re neither rusted nor recognizable as Native Americans. Rather, they communicate a limited geometrical palette he contends could be found in any tribe’s earliest vessels and creative products.

Benton is working on a fifth book, which will document the birth of his sculptures and follow their growth, finishing, and delivery to galleries and installation venues. Indeed, Benton’s sculptures reflect his calculated additions and subtractions of elements. When one “rings,” he presses forward to see how far he can take it. When he goes too far, he reduces until the piece rings again. “When you look at my work, I hope you think nothing can be added and nothing can be taken away.

“The whole process is so much fun and so precious to me — just getting the steel delivered,” he continues. “I live on a one-way street. When semi-trailers carrying tons of steel come in, it’s quite something. I think people should know that stuff.”

Arnoldi — the Venice-based artist best known for his genre-busting assemblages of eucalyptus branches, which he also represented in paintings and chainsawed, carved-wood reliefs — comes to Palm Desert with tall (up to 8 feet), multipaneled paintings that break from his linear forms in favor of color fields in which orbs appear to float in classic figure-ground exploration.

In his new paintings, Arnoldi, 58, uses the same basic shapes that have marked his paintings since the early 1990s. In fact, the orbs seem related to his 1997 potato sculptures and paintings.

“I looked at 100 potatoes,” he says. “I took the beautiful ones and cast them. They also cast beautiful shadows, which I used in the way a landscape painter would use the landscape.” He sometimes uses the entire form, and sometimes he crops it.

Each of the new paintings consists of 20 patterns — five sets of four panels. “I work out a pattern of rectangles, set up a directional field, and figure out a color scheme,” Arnoldi says. “They look simple — two basic colors on canvas — but it’s very calculated and difficult. I sometimes have to paint over slightly wet paint.”

Any panel could exist independently, but these groupings fuel the visual energy of the whole. The raw power comes from the lingering question of the orbs’ fate or the movement of mass in space.

The optimistic colors on these undulating orbs offer a playful distraction from mass-media anxieties.