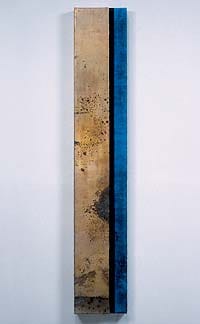 It seduces like the sea — a field of blue, its values changing to mimic the water’s darkest depths, undulating movement, mercurial nature. A sensual yet calculated translucency also prevails — two characteristics that also describe the artist, her gesture, and her process.

Soonja Oh Kim — whose abstract, representational wall constructions over the past 10 years have considered the figure (including human) — took a decisive turn toward land and sea when she produced works for her solo exhibition this month at BGH Gallery in Santa Monica. In the new series, Earth and Water, the Cathedral City-based artist found her muse in the natural environment. Works in rich greens and earthy browns augment the blue panels — some single, others paired, joined by dramatically contrasting, black-painted wooden beams, which deepen the dimension of the work.

Kim consistently combines two- and three-dimensional forms in her work. She begins her process by pouring muriatic acid onto sheets of aluminum. This part-chance, part-controlled step yields organic textures and patterns, to which she gives emphasis and meaning by brushing ink wash over the surface in a gesture akin to Sumi painting. The finished patina exudes a feeling of time passed, a weathered or aged surface that serves as a point of departure for Kim.

After applying the acid and etching ink, Kim mounts the aluminum panels onto boards, resulting in decidedly minimalist, sculptural wall pieces that defy modernism’s traditional flatness. And therein lie the academic sensibilities that permeate Kim’s work: Observers could reasonably connect the formalism of her geometry to the work of icons such as Piet Mondrian or Donald Judd. They might even link the stained surface to Helen Frankenthaler or Mark Rothko.

But her message is in the process.

Kim’s departure from formalism manifests in her appropriation of modern traditions into post-modern “objects.” She conceived her latest examples by fusing her time-tested process and keen awareness of her natural surroundings. In the wake of so many landscape-altering hurricanes, earthquakes, tornadoes, and even a tsunami, Kim’s contemplative works are timely, if not prophetic. Like the disasters themselves, the wall constructions coax you to discover the essence of the experience — how you perceive, relate to, and manipulate the elements.

Although mindful of formal structure and shape, Kim transcends literal headlines and pictures and expresses a deeply personal perspective on the land and sea — as well as our impact on them. The art holds no intrinsic political message; it is visceral, perhaps existential, and certainly simpler than earlier works, which contain more positive and negative space relationships. Instead, these pieces seem to hold a secret about the future, a feeling that something is going to happen. The openness, although confined by the surface boundaries, holds promise.

Moreover, within each of these new works, observers can find appreciable balance between past and present, natural and manufactured, and reality and perception. Some observers associate her simplicity and balance with her Asian (South Korean) heritage. These relationships have, indeed, surfaced throughout Kim’s career — but they are especially pronounced in Earth and Water, where the artist’s signature protruding and receding planes stagger with sharp-as-ever focus and steadfast confidence.