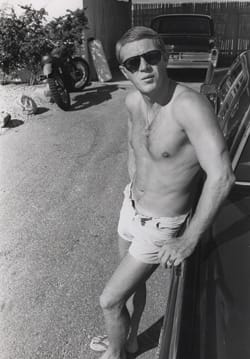 Accustomed to being photographed every time they turn around, Hollywood stars know how best to present their celebrated personas. Occasionally, a skilled photographer manages to strip away the facade and capture the person behind the celebrity.

Passionate about art and dance, Childers is known for theatrical photography. His portraits draw you in, as if you were a paper clip and someone was holding a magnet behind the eyes of his subjects.

Influenced by the style of George Hurrell, Childers gained a sense of theatricality from his time at the UCLA Film School, where he directed student films and began his career behind the still camera as well. After creating a mixed media work for the off-Broadway production of Oh! Calcutta!, he was invited to photograph productions for Sir Laurence Olivier’s National Theatre in London and later became a founding photographer for Andy Warhol’s magazines.

Childers’ images of celebrities have been seen on the covers of more than 200 magazines, including GQ, TV Guide, Esquire, Elle, and Vogue. He worked his photographic magic for more than 150 album covers and film posters. His work can be found on both coasts, as well as in London’s Victoria and Albert Museum.

Palm Springs Art Museum presents an exhibition of photographs by Childers at the Rancho Mirage Public Library, opening Jan. 4. The images, from the museum’s permanent collection, include famous architects and artists, as well as iconic movie legends.

Claxton’s work showcases the poetic style he began to develop in the 1950s when he took to photographing jazz musicians to define them as individuals as much as performers, often by taking them away from the stage. After exhibiting his talent on a 4 x 5 Speed Graphic camera, Claxton snared shooting assignments from such high-profile magazines as Life, Vogue, and Harper’s Bazaar. In the 1960s, he collaborated with his wife, model Peggy Moffitt, to create a collection of modern fashion images. He has an entire book filled with photos and reminiscences of the six years he photographed Steve McQueen.

While his portfolio extends beyond music and fashion to celebrities from Marlon Brando to Jon Stewart, Claxton shows an affinity for musicians to this day. “Photography,” he says, “is jazz for the eye.”

Kirkland has covered everything from astronomy in Chile to the Trans-Siberian Railway. But his lens also has focused on celebrities. In his early 20s, he joined Look Magazine. During the height of photojournalism in the ’60s and ’70s, he joined Life magazine, for which he photographed fashion and celebrities such as Marilyn Monroe, Elizabeth Taylor, and Marlene Dietrich.

Kirkland has worked on the sets of more than 100 motion pictures, including 2001: A Space Odyssey, Titanic, and Moulin Rouge. His work has been exhibited not only in the United States, but also in Italy, France, Germany, and Great Britain and is part of the permanent collection at the George Eastman House. In 1999, 80 of his photos were shown at the Academy of Motion Picture Arts in Beverly Hills.