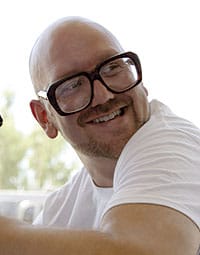 Fashionable. Hip. Relaxed. Jonathan Skow is Palm Springs personified. With an ultramodern attitude and a keen appreciation for fashion, design, and architecture (he and his fashion designer wife, Trina Turk, live in the iconic “Ship of the Desert,” designed in 1936 by architects Earl Webster and Adrian Wilson), Skow has a colorful world to smile about.

“This is my way of showing the world what I feel is beautiful,” says Skow, whose thick, black-rimmed glasses and beret have become his trademarks around town. “These photographs are simultaneously pure, provocative, and mundane. They’re not meant to be political.”

The photographs were taken within the last two years, between his busy shooting schedule for YM, Glamour, and InStyle, as well as for corporate clients such as Target, Sony, Perry Ellis, and Time Warner. Indeed, his personal projects flowered into something more meaningful, which he subsequently felt like sharing with a more immediate audience.

“There’s a similar emotion and graphic sensibility involved with photographing commercially and for my own purposes,” he says. “The works in Tandem allowed me to explore a more personal vision of the subject matter and really challenged me to simplify, down to the most basic elements, what I think makes a strong photograph.”

Skow realizes not only what makes a strong photograph, but also what makes a series of them. Using gelatin silver and chromogenic methods of film processing — with no digital retouching — Skow’s arresting, suggestive images equally capture the senses, the imagination, and one’s curiosity.

For example, Rib — a diptych composed of a black-and-white photograph of a male torso bending gracefully to the left alongside a color photograph abstraction of a degenerating leaf — could easily fetch reference to the well-noted work of Robert Mapplethorpe.  However, these images remarkably capture a certain lyrical dynamism inherent in the life forms. These photographs not only visually complement each other, but also serve to comment on the real and open connectivity between humans and nature.

“As a commercial photographer, you’re always looking at images in pairs, because you’re always working with two pages placed across from each other,” Skow says. “The aesthetic of each has to enhance one another. With these exhibited works, the pairings became more of an emotional exercise.”

Skow sees the radiance and vitality of all things extant. He even mentions being inspired by a building he rented for his opening night party — the Coachella Valley Savings and Loan Building built in 1956 by E. Stewart Williams. “The process was really enjoyable,” he says. “Sometimes I couldn’t capture something I wanted to but was lucky enough to have had the opportunity to shoot. I’m happy I’ve been able to present the work in a way [that] is meaningful to me, and hopefully, others will see the beauty in these, too.”