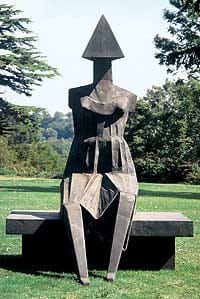 Lynn Chadwick — lionized after winning the International Sculpture Prize at the Venice Biennale in 1956, when Alberto Giacometti seemed a shoe-in — was all but forgotten until 1996, when ArtReview boldly branded him “the great old man of British sculpture.”

Widely regarded as the successor of Henry Moore — and a member of the post-war British sculpture generation that included Kenneth Armitage, Reg Butler, and Eduardo Paolozzi — self-taught Chadwick took his inspiration from the natural world and created compelling forms reflecting the time’s existential anxiety and modernist abstraction.

Chadwick was 88 years old when he died in 2003 while preparing for his first retrospective, which opened nearly five months later at Tate Britain — an exhibition spanning 50 years, from his mobiles to his anthropomorphic figures to his smooth and shiny beasts.

“Chadwick produced images eloquent of both the grandeur and the dilemma of man,” Terence Mullaly wrote in The (London) Guardian. “They are highly idiosyncratic, yet their message is universal.”

Chadwick’s figurative work drives comparisons to Moore, but also asserts daring and innovative use of materials and Bauhaus, Cubist, and Surrealist styles. “He was a master at experimentation,” says Barrie Mowatt, owner of Buschlen Mowatt Galleries, which has opened an exhibition of the artist’s work in Palm Desert. “From his early days with mobiles to welding, to bronze, to stainless steel, he moved into these mediums by himself — as an innovator in the process and with the material.”

However, as the better-late-than-never Tate retrospective demonstrates, he was underappreciated in Great Britain. Mowatt met Chadwick while developing the inaugural Vancouver Sculpture Project (Buschlen Mowatt is celebrating its 26th year in Vancouver, British Columbia).

Today, demand for Chadwick’s work is gaining momentum, with two solo exhibitions in London and auction sales surpassing retail prices, which range from approximately $70,000 for maquettes to $1.6 million for larger-than-life-sized sculptures.

Buschlen Mowatt’s collection dates to the artist’s organic, textured figurative work of the mid-1950s and follows his career through the signature “block-head” figures of the ’60s and ’70s and the polished and geometric Beast sculptures of the 1990s.