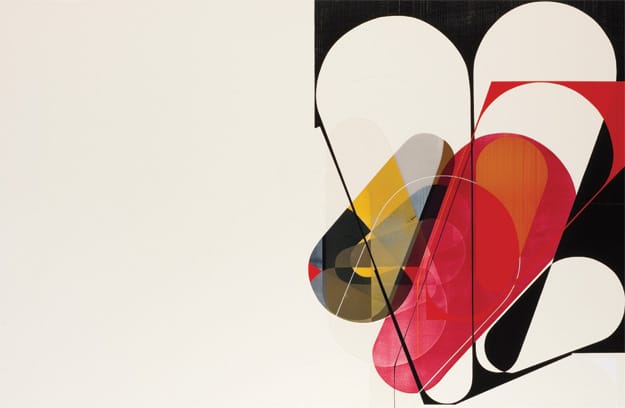 Standing in front of Continental — one of 14 paintings in the new Arcade series by Alex Couwenberg — viewers familiar with the artist’s oeuvre might need a minute, if that, to appreciate the smart direction in which he has taken his work.

On this large canvas, the artist contained familiar elements — overlapping shapes, forms, colors, and pinstripes — mostly to the upper right-hand quadrant, and painted the rest of the canvas white with white pinstriping and bold lines stretching to the lower-left edge. At first look, these subtle, sometimes unfinished lines draw you in for closer inspection. However, with proper lighting, the varnished stripes and contours — a nod to 1970s California Finish Fetish — reveal the artist’s exploration of surface and space.

It’s a dramatic change from his earlier paintings — one that triggers curiosity and draws viewers closer, tempting them to touch the rough, flat, and varnished surfaces.

Couwenberg, whose neatly composed, midcentury-inspired paintings propelled his career for nearly 15 years, has begun exploring imperfection as passionately as he did hard-edge precision. The earlier pieces remind us of a simpler time. Couwenberg had become renowned for filling canvases from edge to edge with a dynamic vocabulary of crisp, sleek, and meticulously crafted lines, shapes, colors, forms, and finishes — all gleaned from the California surf, skate, car culture and midcentury design that permeated his youth.
Although the once-pristine lines now have some rough edges, the guts of the paintings remain true to Couwenberg’s biography. “The paintings continue to grow, and the vocabulary is maturing,” he says. “But the midcentury [modern] aesthetic was part of my upbringing.”

The new paintings include bold lines in addition to pinstripes, and continue to resonate the influence of his mentor, Karl Benjamin, and midcentury contemporaries Lorser Feitelson and Frederick Hammersley. The execution of the lines, however, distorts the exacting idealism of modernist design and the freedom of painterly expressionism.

The Arcade series — evidently named for the pinball machine-style flipper shapes that appear on some of the canvases — signals a new direction for Couwenberg. Paintings such as Party Popper — a small, olive-colored canvas, with explosive pinstriping in bright yellow and orange — shows this dog is off his leash.
The Arcade paintings emphasize loose gestures that take their cues from the New York School and action painters. A freer quality prevails, but the control gained through his hard-edge past retains a measure of order.

In the new paintings, contrasting surfaces — he creates a ridged effect on some pieces by pulling a hard-bristled dust broom over the acrylic paint — accentuate what has worked for Couwenberg for so many years.

“A lot goes back to the fundamentals of design: placement and composition,” he says. “There’s something about midcentury design that was right on: simple lines, forms, and color. As a painter and image-maker, it appeals to me how these elements relate to each other, either in balance or contradiction.”

“It’s very much intuitive,” he says. “One color determines another. And the layered fragments of original shapes equal a union of shared space. [This] is new in the vocabulary.

“I’ve learned to become a mechanic,” he continues. “I look at what is working in the picture and what is not and make adjustments as I go. At one point, the process comes together. … I look at [the paintings] like children. The beginning process involves a lot of giving to the painting, much like the needs of a small child. At some point, the painting starts to speak back and lets me know the direction it needs to take. They develop a personality that is their own and at a point will tell me when they are finished and ready to go out into the world.”