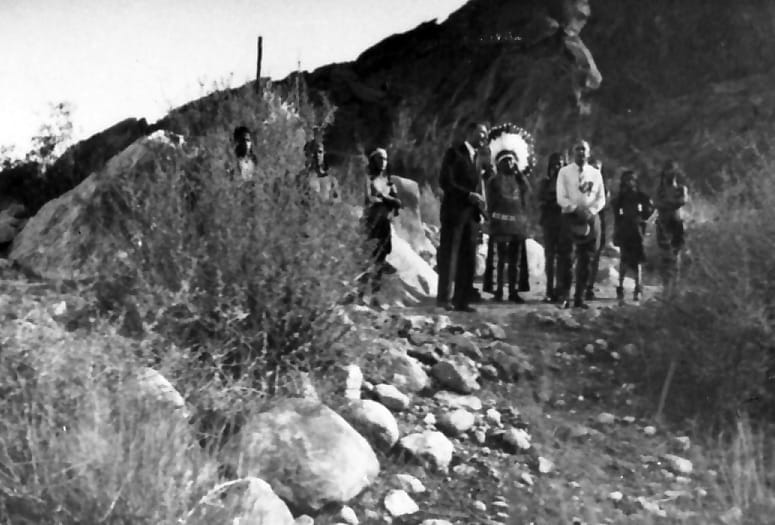 The beauty of Tahquitza Canyon was used as a backdrop for the Desert Plays.
PHOTOGRAPH COURTESY PALM SPRINGS HISTORICAL SOCIETY

In 1884, Helen Hunt Jackson’s novel Ramona was published. The play adaptation, written by Garnet Holme, has been performed on the west side of the San Jacinto Mountains in the Hemet/San Jacinto area annually outdoors since 1923.

Prior to the first performance of Ramona, Holme came to Palm Springs in 1921 and produced a series of three plays, which were named the Desert Plays. They were performed in an outdoor theatre in Tahquitz Canyon.

• READ NEXT: The History of the Ramona Play - 97 Years and Still Running.

During the Desert Plays’ 10-year run, a series of three plays were produced. The plays produced were Fire and Arrow Maker written by Mary Austin and Tahquitz, which was adapted from a Cahuilla legend and written by Holme.

Sunset was chosen as the time for the performance because the spectators could sit in comfort and not experience the burning rays of the sun as they watched the hillsides become illuminated with color. The human dramas were enhanced by the glories of nature. Nothing theatrical or man-made was employed or permitted to mar the rustic beauty of the canyon setting.

Holme was quoted in a 1927 article in The Desert Sun saying, “no drama could ever be worthy of this magnificent background."