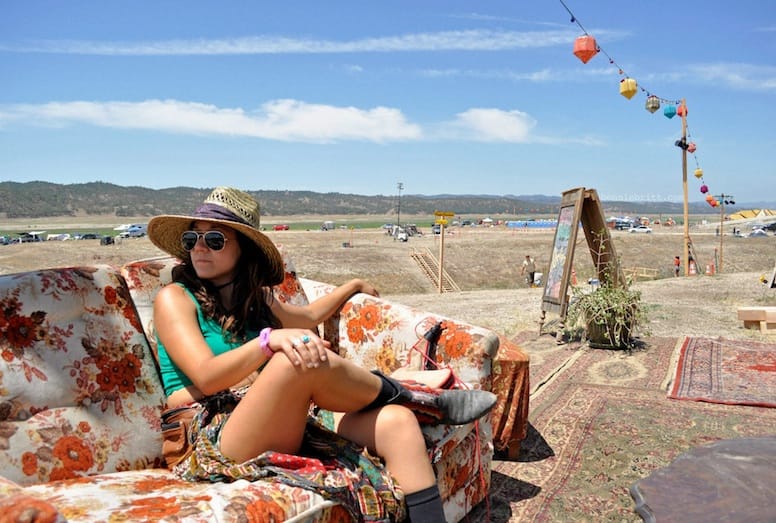 Gabriella Evaro is a native of the desert who planted roots in the artisan village of Joshua Tree with her mother and siblings as a young girl.

The young Evaro's cut their teeth on the fertile art and music scene around them. It wasn't long before they began making appearances at local hotspots like the Beatnik Cafe and Pappy & Harriet’s, garnering the respect of fellow artists more than twice their age. Gabriella has the voice of an angel. She has been in several groups with her sister Bryanna, and best friend Piper Robison, including a series of family music projects led by her brother Gene Jr.

As the family continued to change and evolve, so did the music. They caught the attention of Festival promoter, Barnett English, and played their first music festival in 2008. The lineup back then featured another Evaro, sister Shavaughn, and they won the audience over completely. They became part of the Joshua Tree Music Festival family and English has booked them in several different configurations ever since.

The homegrown Americana Indie Rock group, now called Gene Jr & The Family, is part of the 2015 Joshua Tree Music Festival lineup to hit the stage May 14-17.

This year, Gabriella is doing her own thing. She is moving in multiple new creative directions and the fruits of her labor can be experienced throughout this year's event. She shared with Palm Springs Life a bit of what led her to depart from the family music project and talks about her new ambitious new musical production, a dirty­, dusty wild west blues review and cabaret.

"I am beyond grateful for this beautiful community that continues to inspire me to create more, sing more, dance more, and love more. My brother is so talented. Music flows through him like the wind blows through the desert. He will be playing at this year's festival with Gene Jr & The Family, and I'm so excited to see his set.!"

Gabriella is an artist with no shortage of creative ideas and she has her hands in several festival projects this year, some of which are quite ambitious. She and Piper will be working on revamping an art installation they did in collaboration with artist Brian Ingalls in 2014, a set of swings they call "More Love Swings."

"Its a permanent installation that is a little over a year old. We will be wrapping it in beautiful hues of fabric and flowers so it will be like swinging on a rainbow. It's just pure eye candy and who doesn't love to swing! For about six years now I’ve been able to create anything I want for the Joshua Tree Music Festival thanks to the one and only Barnett English!" Lift Your Soul Creations is a new fashion accessory line that Gabriella, sister Bryanna Evaro, and Piper Robison created nearly a year ago. Select pieces are on sale at two local shops, The Hoof & Horn in Old Town Yucca, and Grateful Desert Herb Shoppe in Joshua Tree. The girls currently have a fund drive to raise capital to launch their brand on "Go Fund Me." They hope to kick up production and launch a website later this year. (See Youtube video: http://youtu.be/9PpxhKVYTZQ).

If dancing, singing, building large scale art installations, and creating a line of a handcrafted fashion accessories isn't enough, Gabriella has written and produced her first music review and cabaret. Part burlesque show, part comedy, and part music review, she considers the show to be an interactive piece of art, a living theater of sorts, featuring 1920­-50 era jazz, blues and dance. "The Cactus Wine Experience" features a cast of family and friends including brother Gene, Chris Unk and Andy Gorill, Bryanna Evaro, Piper Robison, Liesl Clouse, Kacie Dorame, Kali Poulin and will be the entertainment at this year's Late Night After Party.

"I have always wanted to put together a interactive installation that has dance involved in it. I never was sure how I wanted to make that happen exactly and then about a year ago it clicked. I decided from there I wanted to put together a Wild West Burlesque Show! I grew up dancing. That is all I ever wanted to do. I used to dream of having dance studios in major cities, traveling to shows with a group of entertainers! But, after my sister Natalie passed away in 2008, my dancing life stopped. That's when music with my family came in. It was so beautiful and no one questioned it. Playing music together was our way to heal and to move forward. So much beauty came out of that time. For years I have tried to find ways to incorporate dance into our live music sets, but it just never seemed to fit right. I grew up wiith Piper Robison. She was my beautiful dance partner and she encouraged me to keep the vision alive. It was like this flame we protected and never let burn out. Then last year, I found inspiration from installations I saw at LIB Festival and I had my 'aha' moment.

I am a huge fan of old jazz and blues, music from the early 20s to late 50s. Like Skip James, Howlin’ Wolf, Sweet Emma Barrett, and John Lee Hooker. I am coordinating this production and writing a script. Within the script there is a lot of breathing room for improv! I am blown away by the amount of hard work and the level of talent these artists bring to the table. Everyone involved is just perfect for the show! Gene, Chris, and Andy might be playing a cover song one minute, and then improv the next. The magic will be in what they create or have to say. They have the freedom to improvise while the girls music is set in stone. This show will be audience interactive and it has a sense of ridiculousness. It'll be hard for people not to hoot and howl."