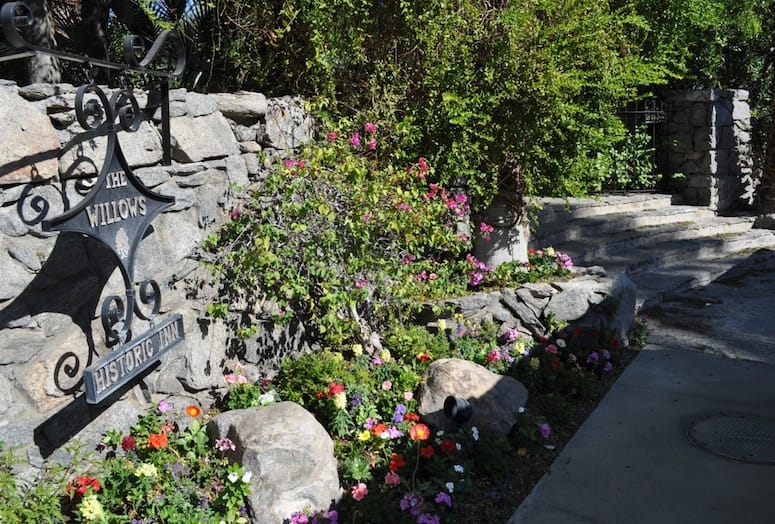 You don’t need to be Einstein to figure out that The Willows Historic Inn, which is located right in the heart of downtown Palm Springs, is a gorgeous and elegant oasis.

But for the record, Albert Einstein was a frequent visitor to The Willows during its previous incarnation as a private residence.

Back in 1924, William Mead, a real estate developer who helped establish the Los Feliz neighborhood of Los Angeles, built The Willows as his weekend retreat. In the late ‘20s, the property was sold to a New York attorney, Samuel Untermyer, who was good friends with Einstein.

The Untermyer family owned The Willows for several decades, but it then changed hands a number of times before its current owners, Dr. Tracy Conrad and her husband Dr. Paul Marut, came to its rescue in 1994.

“It was in really bad shape and had fallen into disrepair,” says Conrad. Over the next two years, the couple transformed The Willows into a small boutique hotel with eight guest rooms.

Since the building holds a Class 1 historic designation, and is one of the 10 oldest structures in the city, Conrad and Marut proceeded with caution.

“We started at the Palm Springs Historical Society with the history of the house and from there found the original blueprints,” says Conrad.

She adds that, “Many of the original elements were preserved, but masked under bad remodels of the 1970s. Some things were irretrievably lost, like all but one bathroom, so they had to be recreated. I think of them as a confection of the 1920s.”

Each of the inn’s rooms is named rather than numbered. The Marion Davies, where the actress lived from 1955 to 1962 during her frequent visits to Palm Springs, has a balcony with a view of the San Jacinto Mountains.

Or maybe check into Einstein’s Garden Room which has its own private patio, the Library where it’s reputed that Clark Gable and Carole Lombard spent some time, or the aptly named Waterfall Room, which has a fireplace and an incredible view of a 50-foot waterfall that’s also visible from the inn’s living and dining areas.

No matter which room you book, you’ll feel like a genius for choosing to stay at this charming, historic inn.

VIDEO: Take a tour highlighting the lobby and dining area.