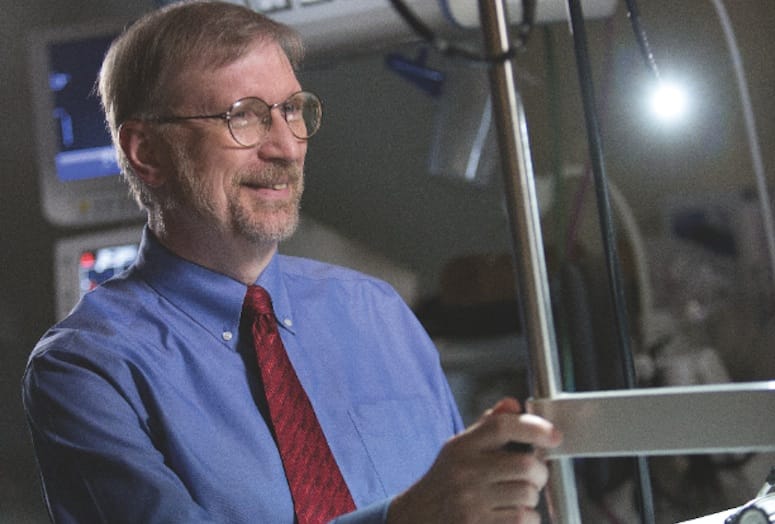 Dr. Geoffrey Block is unique in the Coachella Valley for his endoscopic procedures and his status as the area’s sole liver specialist.
PHOTO BY ETHAN KAMINSKY

When Geoffrey D. Block was recruited by Eisenhower Medical Center to focus on interventional and surgical endoscopy, only part of his glee was about the work.

He’d grown tired of the gray skies of Pittsburgh, where he’d spent more than 30 years as a physician, and his wife was excited about the prospect of living closer to family in Los Angeles.

More important, he would get to bring vanguard endoscopic procedures, including diagnostic and therapeutic endoscopic ultrasonography (known as EUS), to the Coachella Valley for the first time. “It’s a great opportunity and there’s a big need so it’s a good combination of things to attract me here,” says Block.

Before he arrived about a year ago, treating or even diagnosing someone with a tumor or abnormal condition in the stomach, intestines, and pancreas often would involve either laparoscopic or open surgery.

“If someone had a tumor in their pancreas, [then] the way it’s still being done a lot here … is to put a needle through the abdomen, through the stomach wall, and into the tumor to get tissue,” Block explains. “Doing it by endoscopic ultrasound [is] all done under sedation with an endoscope down the mouth into the stomach. There’s no scar, there’s no pain, no tracking of tumor with the needle. And it’s outpatient.”

Block reports that his patients are “overjoyed about not having to be cut open or stabbed while they’re lying there holding their breath. Before, the alternative was to travel to L.A. or to Phoenix to get these procedures done.”

Block is a valley curiosity for other reasons: He’s the only liver doctor in the area, and spent years performing transplants in Pittsburgh. Although there are no transplant programs here, there are plenty of residents who’ve had a liver transplant or are battling liver disease.

“When they discover I’m here, they come to get their ongoing care here,” says Block, who has a close network of transplant doctors around Southern California. “The folks that run the transplant programs at Loma Linda, Cedars, and UCLA are all former trainees or classmates of mine [from Pittsburgh]. We’ve known each other for many decades, so they’re happy to have me here and I send them patients when they’re in need of surgery for cancers or transplant.”

VIDEO: Dr. Geoffrey Blocks talks about being a ‘geek’ of endoscopic techniques.

For a guide to health and wellness in the Coachella Valley including a comprehensive list of more than 1,000 local doctors and medical services, CLICK HERE.