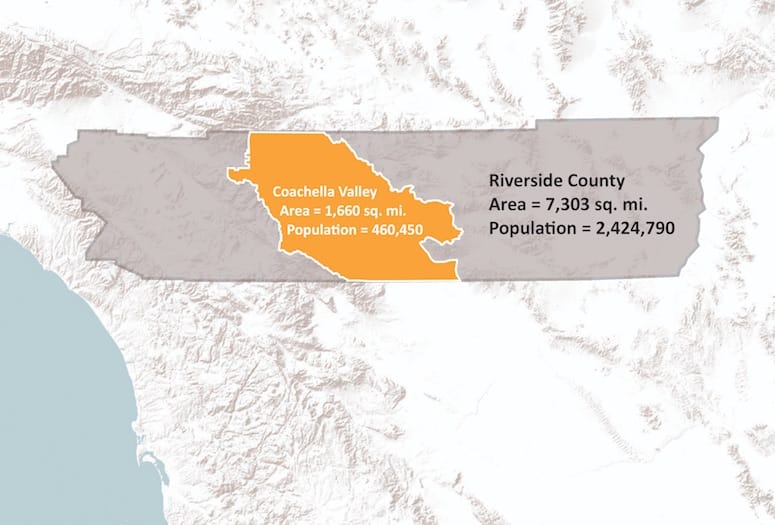 The Coachella Valley’s entrepreneurial spirit, resort vibe, spectacular setting, and lower cost of living compared to other desirable places in Southern California have attracted you to set up business here. If you haven’t done so already, you should gather local economic and demographic information to understand your potential desert-based market.

Much valuable documentation is recorded at the county or metropolitan statistical area level. Geographic information system capabilities allow Coachella Valley Economic Partnership to aggregate important data within much more confined boundaries, sometimes down to an area of several blocks.

The level of detail available for determining the viability of a business model and making informed decisions could be crucial: the greater the granularity of the data, the deeper the level of detail.

The U.S. Census Bureau conducts an annual survey that collects facts about business location and size, industry concentration, wages, etc. While the census reports some data down to the city level, it can be very difficult to access and utilize. Rural and unincorporated areas may be overlooked altogether.

The U.S. Department of Commerce Bureau of Economic Analysis uses census statistics to determine widely used business metrics like gross domestic product and regional price parity. But such numbers are reported for counties or metro regions, not microcosms.

The United States contains 3,142 counties. With so many recognized regions within the states, one can see that they can be useful for comparing economies. But Eastern states have a disproportionate number of counties compared to the West, where sparse populations resulted in creating counties with very large landmasses. Virginia has 14 counties with areas smaller than 10 square miles. In stark contrast, Riverside County covers 7,300 square miles. Economic factors reported by county in Virginia hardly compare to similar data reported in California.

The U.S. Office of Management and Budget and the Census Bureau use metropolitan statistical areas for economic analysis. These areas center on a core large city (or a combination of cities, such as Dallas-Fort Worth) with influence on and close economic ties to surrounding towns and regions. With the rapid urbanization of the United States, MSAs characterize the growing economic loci of urban areas. But, as with counties, using MSAs as comparative references can prove very tricky.

The Coachella Valley lies within the Riverside–San Bernardino–Ontario MSA. Encompassing 27,408 square miles, it marks the nation’s largest MSA by size. By population, it ranks 13th, with an estimated 4,597,980 residents. To put that into perspective, the Coachella Valley comprises only 6 percent of the land area of its MSA and 10 percent of its population. If a prospective business analyzes MSA data, it will find that information unrepresentative of the unique economy of our desert communities.

Prospective and existing companies can harness the powerful modeling and statistical tools of CVEP’s GIS Services to make well-informed and fact-driven business decisions to help them thrive in one of the world’s best places to live.