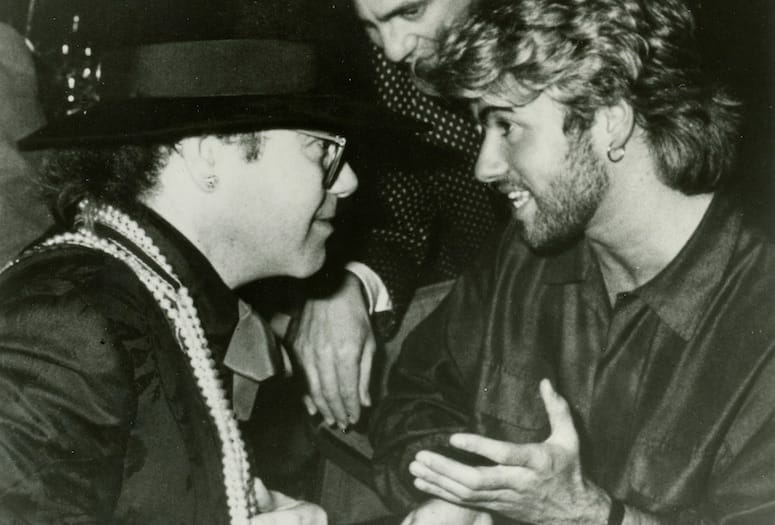 George Michael was one of the great vocalists of modern music. It’s just a fact. If you think of him as the voice behind bubbly pop hits like “Wake Me Up Before You Go Go” with his ‘80s band Wham! you need to listen to his solo recordings such as "Father Figure," "Freedom '90," and "Fastlove," which include silky arrangements worthy of Frank Sinatra in his prime and covertly illuminating lyrics that imply why he wasn't comfortable openly sharing his deepest secrets with his myriad fans.

Author James Gavin, who has written perceptive, definitive biographies of music legends such as Chet Baker, Lena Horne, and Peggy Lee, has turned his laser gaze on Michael. With his just published George Michael: A Life (which he will sign at Just Fabulous on July 16), Gavin has spent years researching the late singer from his childhood as an unhappy, unpopular boy named Georgios Panayiotou, who found solace in the songs of Stevie Wonder and Elton John, to the soaring heights of fame as the dashing vocalist for Wham! and as a solo Grammy Award-winning superstar.

The author pulls no punches as he chronicles Michael’s struggles with substance abuse, his numerous arrests, his unhappy relationships, his court battle with his recording label, and his premature death at age 53 in 2016. Prior to his Palm Springs appearance, Gavin chatted with Palm Springs Life about how being closeted tormented the singer, the challenges in researching the life of a carefully guarded superstar, and the effect a chastising letter written by Frank Sinatra had on him.

What was it about George Michael that interested you and made you want to spend years researching his life?

I'm a sucker for stories about conflicted, complicated, troubled people who took their personal turmoil and turned it into beautiful moving music, and that's what he did. His gifts as a singer are not unlike the gifts of those other artists. George had a beautiful God-given talent for singing. It came naturally to him.

I imagine the research into his personal life was challenging. Did you encounter people who didn't want to talk about him?

It was the hardest thing I've ever had to do. My other books, which all had their challenges, were all a piece of cake by comparison because the other books were about legends, prestige figures.

With this book, I was writing about a superstar, and I discovered that superstars have many layers of protection around them that legends don't necessarily have. The other people were artists. George was a big, big star.

So, people were still loyal and keeping quiet?

In order to stay in George's good graces and stay in the inner circle, you had to guard his secrets. Those who did not were 86'ed. I had a number of things working against me. One is that George had just died less than six months earlier, and people close to him were especially sensitive about talking about him. So, my interviews got off to a very slow start, also, because I was innately mistrusted because it didn't matter what my resumé said. 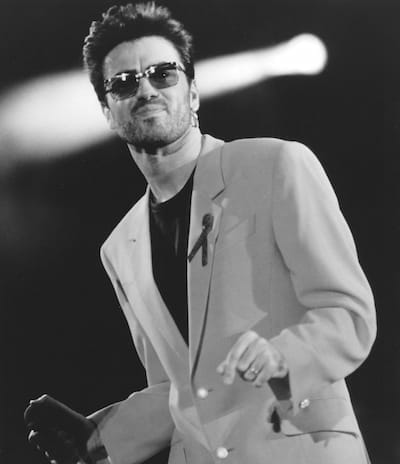 You eventually broke through to a lot of his friends.

It took a long time to break through. So, in the end, I interviewed close to 250 people. For every one of those, somebody else had ignored me or said no to me. I was very despairing for the first year or year and a half of this book because I worried that I would not be able to get what I needed to write the book, what I wanted to write. In the end, through sheer persistence, I did.

My fortune started to turn about a year and a half into it and, gradually, some of his musicians began to trust me. And then other people that they knew chose to take a chance on me. It got easier after that, but this is the hardest book, for many reasons, that I've ever done.

He had such an expressive voice, yet he never trained professionally.

If he ever studied singing, I'm not aware of it. At a very early age, he discovered pop music in a big way. That's worth noting because George's field was not rock and roll. I'm talking about pop music as a genre. It aims to draw in everybody, and George wanted nothing less than to draw in everybody. He was fascinated by the mechanics of pop music.

When as a child, he first heard recordings by The Supremes, he pored over those recordings and studied them and picked them apart to try and figure out the mechanics of what made them work, and that's what dictated a lot of the music that he created thereafter. But in terms of singing, I think that he was a sponge. He was deeply drawn to great ... He was a blue-eyed soul singer at heart, so he was deeply drawn to the great soul singers. He loved Stevie Wonder and Smokey Robinson. He certainly loved Elton John.

One of the strangest moments in his career was when Frank Sinatra wrote an open letter to him after George complained about the cost of fame. It was published by several media outlets. What effect do you think that letter had on him?

Well, first of all, I can't say with 100 percent certainty that Frank wrote that whole letter himself. It sure sounds like him. I couldn't find anybody in the Sinatra camp, and Frank's long-time secretary had died by the time I was researching all this. So, I wouldn't lay down my life that Frank sat at the typewriter and wrote that letter. But nevertheless, it sounds just like Frank. 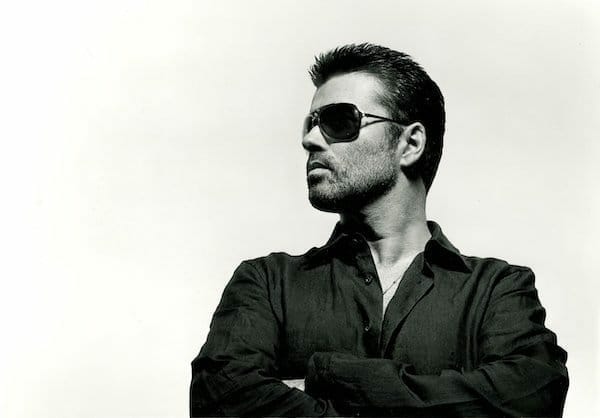 PHOTOGRAPH BY JAMES DIMMOCK
Posing for the release of his album, Patience, George Michael's fifth and final album released in 2004.

He must have approved it for it to have been sent to the media.

He must have approved it. But what's interesting about that letter is that it wasn't just sent to George. It was sent to newspapers. So, it was publicly embarrassing for George because Frank felt that George was sounding like a big crybaby and an ingrate, and he was sounding like those things. I don't think that the letter comes off as cruel. It comes off as tough love. I'm sure that's what Frank intended.

Did it have any effect on George's attitude or his thinking? No, it did not. He complained about it publicly, and there were a couple of little public digs at Frank that resulted from that. So, it didn't turn George's thinking around, I'm sorry to say, but it became part of the George Michael legend. It came in that period when he was about to sue his record company and when the wave of public opinion was mostly against George because he seemed like a big baby who had had unimaginable success and wealth.

You write that George seemed to be sending a signal to people with his final social media posts just months before his death. Are you suggesting people might have known that he was going to die and helped prevent it?

George had tried to take his life a number of times in a number of ways. I think that's true because George was tired. He was tortured. Doors were closing for him. He was stuck in a relationship that he somehow couldn't seem to find his way out of.

His ability to write songs had dried up. It was agony for him to write songs. I firmly believe that his singing voice had deteriorated by that time to the point where he didn't sound that much like George anymore, and so what was left for him? In the last few months, he had some projects, but they were all looking back-type projects. He had that documentary that came out posthumously called Freedom, and that was a looking back. He was repackaging old recordings. 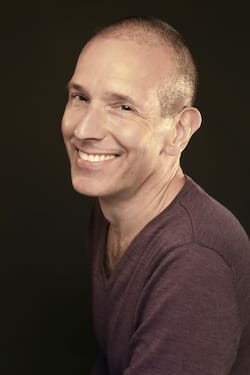 “George's gift, in a way, went deeper than innovation because he sang with heart. Also, his voice had an innate ability to touch hearts.”

What do you think is the best way to enjoy his music? Do we need to distance ourselves from all these controversies and pretense and just listen to his voice?

Everybody knows what his story is, and the personal life is inextricable from the music. Knowing the story, to me, enhances what you're hearing because you hear what's underneath it. You hear a little bit of what inspired it. I always love to know as much as possible about artists that I listen to because then you can connect one with the other. I'm not saying that they always match.
Sometimes the human being and the artist are shockingly different. In the case of George, his music has so much humanity in it. Now it's almost painful for me to listen to George because I know so much about what he was going through to make that music.

What do you consider his most autobiographical song?

It's hard to choose one, because he had a number of them that spoke to where he was at various points in his life. I'll just tell you the one that popped into my head and that's “My Mother Had a Brother” on the Patience album. That song tells you a lot about George's inner workings because it's all about the story of the mother's brother, his Uncle Colin, who was a tortured and mentally ill gay man who took his own life.
George grew up haunted by that story because it surely influenced the way he felt about gay life. After George died. Elton said he didn't think George was ever happy being gay. All of that can be traced back to the homophobia he experienced in his childhood and also the fear about possibly winding up like his Uncle Colin did.

Where do you see his place in the pantheon of great vocalists?

It was not as an innovator because he was not an innovator. George's gift, in a way, went deeper than innovation because he sang with heart. Also, his voice had an innate ability to touch hearts. When I began doing this book and started telling people I was writing a book about George Michael, everybody immediately smiled, and I could see a wave of warmth come over them as they instantly connected that name with the sound of his voice and with a song or two that had branded themselves in people's hearts.