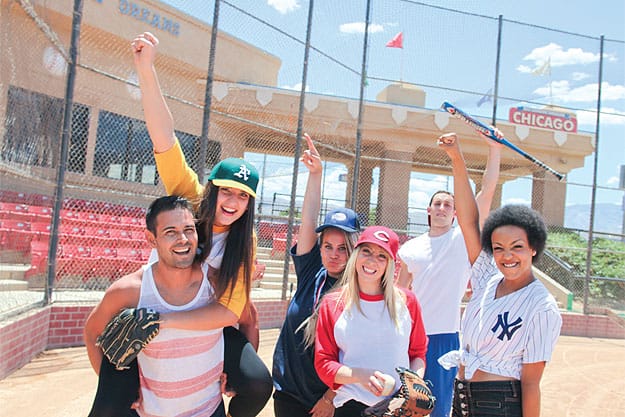 At any age, participating in team sports and group activities fosters a spirit of cooperation, respect, achievement, and humility.
J.Everette Perry

Whether you’re 5 or 85, you can enjoy the physical benefits of regular exercise: weight control, mood elevation, and increased ability to fight off disease. It may even help slow aging due to stress, according to a study from UC San Francisco. But the overall effects of healthy competition also have a far-reaching and positive impact on social skills, coping mechanisms, and work ethic at any age.

While as many as 40 million children play organized sports in the United States each year, the President’s Council on Fitness, Sports and Nutrition offers a sobering statistic: The obesity rate for people 12 to 19 years old has tripled from 6 percent in the early 1970s to 18 percent in 2008, with only one in three kids getting daily physical activity.

Regular exercise helps to combat obesity and can boost academic performance. In a 2008 study by the American College of Sports Medicine, physically fit middle-schoolers scored about 30 percent higher on standardized tests than their less-active counterparts. When the U.S. Centers for Disease Control and Prevention reviewed 50 studies on physical activity and school performance in 2010, it concluded that recess time helps with attention span and concentration; longer physical education classes help boost test scores; and taking part in team sports can improve grade point average and graduation rates.

“Sports teach children how to set and attain goals, how to respect authority, and how to respect other people around them,” says Quinton Egson, chief professional officer at the Boys and Girls Clubs of Coachella Valley, which has 6,500 members. “Sports also teach kids how to develop a good work ethic, which may translate to the work environment.

“Team sports give kids an opportunity to feel safe when they’re competing, so it’s not a matter of a kid having all the pressure to be the best, because on given days, one athlete maybe be better than the other,” he says. “It builds character, it builds a sense of working together, it teaches kids how to win with respect, and it teaches them how to lose with grace.”

One child Egson worked with “was a top-shelf athlete, but had aggression issues,” he says. “He really did not know how to respect authority and didn’t have respect for other kids. But after playing football and after being able to understand that life was bigger than himself, he began to listen to his coach. He began to open up to teammates, and as a result started doing better in school and just became a better person, easier to work with, and easier around the home.”

Children can enter competitive sports as young as 7, he says, after they go to school, and when they can learn how to behave in a social setting, but they can even begin learning these skills as young as 4.

Local professional golfer Heather Drew began playing at age 8, eventually joining the LPGA. After 13 years on the tour, Drew was diagnosed in 1996 with relapsing-remitting multiple sclerosis.

“I had some hard times after my diagnosis,” she says. “They didn’t know that much about it.”

But Drew, who lives in Bermuda Dunes, remained competitive. “It took some time until I started feeling better, and I figured that I would go back to what I had done: play golf and play golf at a high level. I returned to the tour in 1999, and I started caddying on the tour in 2000, and I did that for 11 years.” She also recently played in the LPGA Western Section Championship at Rancho La Quinta Country Club.

A recent study at University of Edinburgh in Scotland, published in the journal Neurology, found that physically active people in their 70s had less brain shrinkage and larger volumes of gray matter than their more sedentary counterparts.

Drew, 53, prepares mentally and physically for tournaments by playing practice rounds and visualizing the course and the shots she needs to make.

“The three things I do to help ensure than I’m able to do what I want to do it,” she says, “are talk to my doctor and get a treatment plan, be as healthy as I can in terms of what I put into my body, and get as much exercise as I can. In the desert, it’s a very easy thing to do. All you do is walk outside, and there are mountains; there’s a lot of hiking, and you can go to the gym. Exercise gets everything in your brain squared away.” Experts advise to start with the basics — without trying to do too much too soon. Check with your doctor before beginning any exercise regimen, and be sure to get proper rest and nutrition. As you become able and profi cient, challenge yourself to get to the next level. That motivation will fuel a healthy lifestyle.

Dr. Sharon Colgan, a licensed clinical psychologist with Sport Psychology Associates in Chula Vista, works with elite and amateur athletes. One of the biggest pitfalls she sees with people beginning or maintaining a regular exercise or sports program is doing too much too soon.

“I work with many physicians who refer people to me, because if they’re over 70, they probably have not been in a regular exercise program,” Colgan says. “Then there are the weekend warriors, and they do too much to the extreme. I’ve got a lot of cyclists who go out and do 50- or 100-mile rides, and they can’t walk the rest of the week. People of our generation — in their 40s, 50s, and 60s — have trained so much that they have not adjusted very well to aging.”

She also advises starting with the basics — checking with a physician before beginning any regimen, getting adequate sleep, and practicing proper nutrition.

For clients recovering from injuries or suffering from fear and anxiety, Colgan has many techniques to help. These include cognitive behavioral therapy, systematic desensitization, thought field therapy, emotional freedom technique, flooding, implosion, and eye-movement desensitization and reprocessing.

“We actually teach skills that are also lifetime skills,” Colgan says. “We teach anything from goal-setting to motivational techniques, focus and concentration, imagery, visualization of their goals, and self-confidence. It’s not a one-size-fits-all.”

Sport psychology consultant Doug Gardner takes a different approach when working with athletes. Gardner, who is coordinator of Mental Training Services for the NFL Players Association, says a lot of athletes mistake winning for achievement. “Not everybody can be a ‘winner,’ but does that mean you’re a loser? If you focus on winning or losing, you are not focusing on development and learning. I don’t really care if you win or lose. I care that you are developing and getting better.”

“People become afraid to work at something because there is no guarantee that if they work they’ll be successful,” he continues. “But you still have to work to see if you can be successful. That’s the hardest part about it. People place self-imposed limitations on themselves all the time.”

Gardner is a proponent of preparation and hard work to stay motivated, with pro and recreational athletes. “Great athletes and superstars are the ones who understand the concept that they are good, but that they have to continue to work to improve and get better to create an all-around game,” he says.

“I challenge athletes to grow and learn and work on areas they need to get better at. Psychologically, people tend to only want to work on or do things that they’re good at. They don’t want to demonstrate incompetence, especially in front of their peers. You can’t be afraid to make a big mistake, and you can’t be afraid to suck at it for a while.”

By focusing on improving weaker skills, overall performance increases, he says. “That’s where the empowerment comes. If someone starts working at something they’re not very good at it, they start to see improvement. That improvement enhances motivation to continue working. As you continue to get better, you see yourself developing competency, and you then become more confident.”

In the end, Gardner says, winning is about achieving one’s goals, not the scorecard. “Society defines winning one way, and my job is to help people think it’s more of a personal thing. It’s about giving yourself a chance. The whole point is that sport is a metaphor for life.”