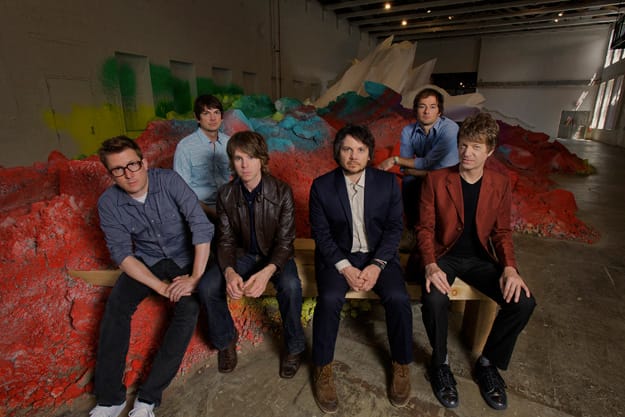 Led by Jeff Tweedy, Wilco burst onto the music scene in 1995, emerging from the ashes of the alt-country band, Uncle Tupelo.  Since then, they have produced 8 studio albums, none of them sounding like the last.  Refusing to be boxed into any one particular musical genre, Rolling Stone has described them as “America’s foremost rock impressionists.”

I had the opportunity to talk to Wilco guitarist Nels Cline, while he was on the road in Arizona.  He shared some desert stories, insights on the future of band and an explanation of how he manages the 48 guitars he has with him on stage every night.

Q:  The band Wilco was originated in Chicago; however, I read somewhere that you were born and raised in Los Angeles.  Do you happen to have any connections to the Coachella Valley?

A:  Yes, I do!  I was friends with the Coachella Valley band, the Sort of Quartet.  I used to drive out to the desert to play shows and jam with Mario Lalli at his venue in Indio, Rhythm & Brews, years ago.  Always was a good time.

Q:  This Friday, you will be returning to the desert to play in a show at the McCallum Theatre in Palm Desert.  How is a theater performance different from others, and what can we expect to hear from you guys?

A:  I'm not sure what we will perform on Friday night.  It all comes down to the leader of our band, Jeff Tweedy.  He gives us the set list the night of the performance and we take it from there.  We have been playing more tracks off of our new album, however, other songs from our song book are great for theater performances.  So, you just never know!

Also, the sets vary on the exact day that we will play.  So, for instance, on Friday and Saturday nights people want to party, so we try to bring that energy to the stage.

If someone does want to request a particular song for us to play, there is a place on our band's website that allows for fans to put in their requests.

Q:  How many instruments are with you on stage?

A: Oh man, a lot!!!  We have a lot of gear.  There are about 48 guitars.  This is why we don't play so many "exotic" shows, because of our elaborate production.

Having this many guitars is a weird luxury, we are able to create the right tones, to set the right mood for the audience.  I feel lucky to be able to choose a certain guitar for a particular sound and feel for a song.

A:  I really don't know, overall all that is really hard to predict.  We keep it really loose.

Jeff Tweedy is the leader of this band, so he guides the group in the direction we take.

When it comes to our sound, our songs get written depending on what we are going through and feeling at the moment.  These sounds are like life, they come at unpredictable and random times.

Q: You guys are constantly on tour.  How is tour life with the band?

A:  Not to sound too “fluffy,” but we are a no drama band.  We get along great and are really efficient; we are able to get right into “the zone” when we need to.  The only that's hard about touring is the toll it takes on your personal life like with family and all that.

Q:  When you joined the band in 2004, did you ever expect it to go this far?  To be so successful by winning Grammys?

A:   I had seen Wilco and knew some members prior to joining.  When I joined, that was the most successful thing I had done up to that point.  Because I already knew the band, I knew it was going to be big.  And I also knew I was going to stay around for a long time because I'm someone that stays committed to long-term projects, as you can see in all my side projects.  However, I wasn't quite prepared for all the screaming.  When on stage, seeing the level of excitement and admiration coming from the audience was definitely something new for me as well.

Q: On Friday there will be fans from all across Southern California and Arizona coming out to see you.  Do you have anything you'd like to say to them?

Curtain rises at the McCallum Theater at 8 p.m.  Opening sets will be performed by Jonathan Richman and Tommy Larkins.  Tickets are on sale at the McCallum’s website.