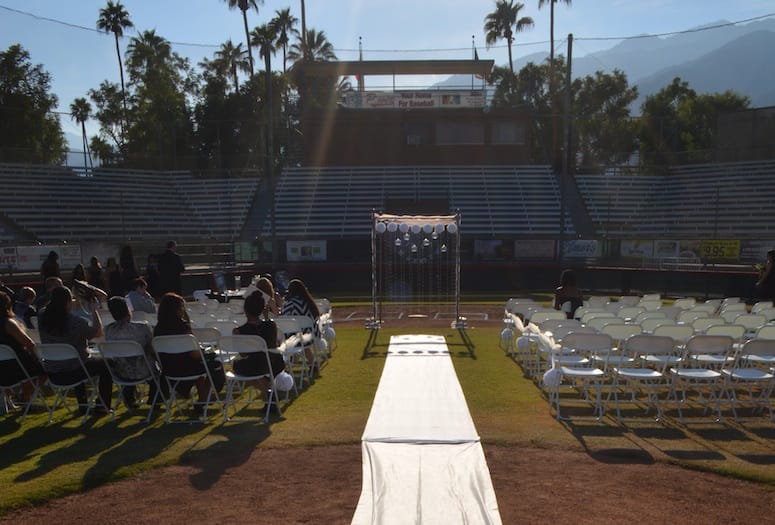 At least that’s what Amanda and Kyle Carnine might suggest.

The Palms Springs couple, who are both die-hard California Angels baseball fans, took their wedding to the only venue that made sense – the ballpark.

The couple tied the knot at home plate of Palm Springs Stadium late last year in front of 150 friends and family members. The couple's love for baseball made professing their love in front of the stadium bleachers seem natural.

Baseball has always had a special place in the hearts of high school sweethearts Amanda and Kyle, who grew up in the area and got engaged at Kobe Japanese Steak House in Rancho Mirage where they had their first date.

Kyle had been playing baseball for 16 years when headed to Olympic College in Bremerton, Wash., on a baseball scholarship after high school. Sadly, he headed back home three months later after an injury ended his college career. He returned home and now works as a medical assistant, while Amanda teaches kindergarten.

When it came time to strategize for the big day, Amanda and her planner, her uncle’s wife, Lisa Perez, sought a meaningful venue. When their first idea fell through, Lisa suggested a novel location: Palm Springs Stadium, home of Palm Springs POWER Baseball. The owner was open to it and Amanda was thrilled. Friends and family surround the couple with congratulations.

“I wanted to surprise Kyle, but I had to tell him eventually,” she says. “When it was a confirmed, I texted him a photo that said, ‘We got it!’ and he knew.”

With Kyle’s formative years as a starting catcher, and the couple’s annual tradition of attending at least five Angels games per season, professing their love in front of the ballpark’s towering bleachers felt like coming home. Amanda’s uncle officiated, Amanda’s six-year-old brother carried the rings down the aisle in their cousin’s ball glove, and their planner dressed up the field with elegant décor. Guests were seated along the infield on the sides of the pitcher’s mound.

“Our guests were not expecting this kind of location,” says Amanda, who comes from a religious upbringing and originally planned to wed in a church. “It was very different for my family. But in the end, they all loved it.”

Following the afternoon ceremony, the party continued with dinner and dancing at Indian Canyon Golf Resort, even after the couple snuck out early. These star players needed some rest from their homerun celebration. • The Living Desert’s District Commissioner’s House. Intimate and exotic, this African village-style hut from the colonial period accommodates 20 guests — not including the endangered Amur Leopards that join you from beyond the glass.
47900 Portola Ave., Palm Desert, (760) 346-5694, ext. 2161; www.livingdesert.org

• Rendezvous Hotel. The fabulous ‘50s are alive and well at this retro-kitschy boutique hotel featuring 10 themed rooms around a pool and firepit. (The pink room was Marilyn’s!)
1420 North Indian Canyon Drive, (760) 320-1178; www.palmspringsrendezvous.com

Lisa Marie Hart has been writing about weddings since serving as an editor at Bridal Guide magazine in New York City in 1999. Since 2006, she has been editor of the annual Palm Springs Life Weddings & Honeymoon Planner. Away from the laptop, she creates tiered cupcake stands for weddings and celebrations at www.highteaforalice.com