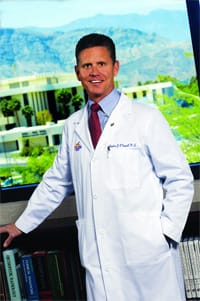 Dr. Stephen O’Connell set his career goals early. In fact, he had his life mapped out soon after graduating — from kindergarten.

"In my first-grade yearbook, I said that I wanted to go to Notre Dame, study medicine, and be a surgeon," he says. He succeeded on all counts.

Growing up near Washington, D.C., he idolized his family’s physician and wanted to follow in his footsteps. And in a family of Fighting Irish fans, O’Connell’s choice of university was a given: "I think I was a junior before my dad told me there were other colleges," he says.

For O’Connell, choosing orthopedic medicine involved timing and bit of Irish luck."When I was a medical student, I went over to [Johns] Hopkins to do my orthopedic rotation, and it was, I guess, fortuitous that a couple of people were sick and they needed help. As a junior medical student, I got to do a lot of things — more than maybe I would normally get to do — and I really had a great, fun time," he explains.

"I tend to be someone who really likes mechanical things. In fact, I paid my way through medical school building swimming pools. I always liked construction; and, really, orthopedic surgeons are just construction guys with really nice equipment."

O’Connell began his career in joint replacement, but found it monotonous performing the same operation repeatedly. He chose to pursue a hand and shoulder specialty, which appeals to his precise, energetic personality.

"Hand surgery is very meticulous, and I tend to be a very focused, meticulous person. We do a wide variety of surgeries — tendons, nerves, muscles, bones. So we cover a gamut. It’s never boring."

O’Connell’s Rancho Mirage practice allows him to be part sleuth, part master builder. Coming up with a diagnosis is like solving a mystery, which is the toughest part of the job, he says. The mechanics of the hand are complicated; and once he identifies a problem, he tailors a surgery to fix it.

"Intellectually, it’s very stimulating trying to figure out the problems of the hand. And technically it’s very demanding, because there’s not a lot of room for error. If you’re 3 or 4 millimeters off in the knee, it’s probably not going to be a big deal. Half a millimeter in the hand could be a disaster."

On a daily basis, O’Connell sees about 50 patients, with problems ranging from arthritis to fractures and nerve damage. He also puts in 14-hour days in the operating room, where his repertoire includes nearly 100 different hand surgeries. This includes a revolutionary knuckle-replacement operation using pyrocarbon implants that is so new the FDA approves it only for humanitarian purposes.

O’Connell prides himself on his commitment to his practice, so he strives to stay on top of developments in his field, frequently lecturing at orthopedic meetings. His top priority, however, is family: his wife, two children, and two stepchildren. In his down time, he’s a keen golfer, often playing a few holes in the evening with his wife, Jean.

"It’s my greatest accomplishment to be a committed father and a committed surgeon, no matter what happens," he says.