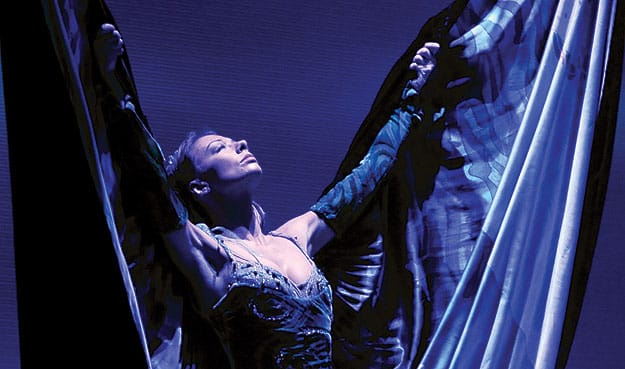 The air hums with anticipation before a Broadway show begins. The audience murmurs, settling into plush seats to the dissonant sounds of the orchestra tuning. Then house lights dim, and a hush falls. The first notes of the overture break the silence and the journey begins, sweeping you along for the ride to fantasyland.

This is the lure of Broadway, a quintessential and timeless escape that is especially popular this season in the desert.

“It’s the magic,” says McCallum Theatre’s Mitch Gershenfeld. “People go to the theater because it’s entertainment, a way to get away from your everyday life for a couple of hours and be transported to something exotic, different, or just plain fun. These shows tell stories that resonate with people.”

This year’s offerings at Coachella Valley venues run large and small, contemporary and traditional. McCallum has four large-scale productions and many smaller shows on its schedule this season.

“In January, we have My Fair Lady, a great Lerner and Lowe classic, and also South Pacific,” says Gershenfeld, McCallum’s director of presentations and theater operations. “These are the national touring companies, produced by the Broadway producers and sent out on the road. The productions are really lavish, with casts of 15 or 20 or more, an orchestra in the pit, and beautiful sets and costumes. They come in here with anywhere between three and six big semi-trailer trucks full.”

The lineup also includes a few new classics. “In March, we’re bringing back Mamma Mia!, which is probably the most popular musical that ever played the McCallum Theatre,” he says.

In the Heights — the 2008 Tony winner for best new musical — arrives in March with an edgier feel. “It’s a fascinating show that takes place in the Washington Heights section of New York,” Gershenfeld says. “It’s a story about the people who came from the Dominican Republic, Puerto Rico, and Cuba. The music is very contemporary — salsa and a Latin score — but there’s also rap and hip-hop. It’s a very exciting show with great dancing. It’s a traditional story, similar to Fiddler on the Roof, but in a much more contemporary meaning.”

Smaller-scale shows such as Sandy Hackett’s Rat Pack Show, The Marvelous Wonderettes, Boom Town, and Blast! round out the season. Blast!, a Tony and Emmy winner, stars drum and bugle corps. “Imagine what you would see at a big football stadium, with all the brass instruments and all the twirling and the flags — but on a stage,” Gershenfeld says. “It’s a magnificent show.”

Michael Childers’ One Night Only returns April 18, this time as a tribute to two Broadway legends. “This year we’re planning a huge, spectacular salute to the Gershwins, George and Ira,” says Childers, who has produced the show for seven years. “It’s an all-star cast from Hollywood and New York and Broadway being brought in. The grand super finale is going to be a medley of Porgy and Bess.” A choir from Indio will back the singers for the close, which Childers promises will “blow everyone’s mind.”

The show, which benefits Jewish Family Service, will feature a Ginger Rogers/Fred Astaire dance performance along with 16 singers. Lorna Luft will wrap the first act with “The Man That Got Away,” made famous by her mother, Judy Garland.

Tickets go on sale at the McCallum box office Feb. 1.

Childers has already begun planning the 2013 show — a salute to Stephen Sondheim. (One side benefit of One Night Only, Childers says, is that the Annenberg Theatre often books some of the performers for its Cabaret 88 shows.)

Broadway is alive on a smaller and more intimate scale, too. Indian Wells Theater hosts the Broadway Showstoppers concert on March 25, featuring Kim Huber and Roger Befeler, with songs from shows of the golden era, such as Oklahoma! and Carousel.

For professional tap-dancer-turned-mortgage-broker Hugh Van Horn, bringing more Broadway here is a personal mission. A few years ago, he joined the nonprofit OperaArts and began producing small shows featuring young Broadway talent. The result was Broadway Comes to Indian Wells at the art gallery Royale Projects. Singers included Lisa Robinson, Ann Peck McBride, Scott Drier, and Joshua Carr. “The second one, we did rock operas,” Van Horn says. He plans to maintain that momentum, as he finalizes a show slated for February 2012.

“The whole point is to emphasize OperaArts and to talk about bringing arts into our community as part of our society,” he says.

The father of three young children, Van Horn wants the next generation to be as passionate about the arts as he is. “I would not be the person I am today without my involvement in musical theater at a young age,” he says. “For the McCallum to be sustainable for the next 50 years, my kids have to get into it and start watching musicals. The way to do that is by showing them it’s not just the stuffy music your parents used to listen to. There are some really cool things out there.”

This season in the desert does offer something for everyone, young and old. Regardless of age, everyone loves a Broadway show, Van Horn says, because “it allows you to dream.”