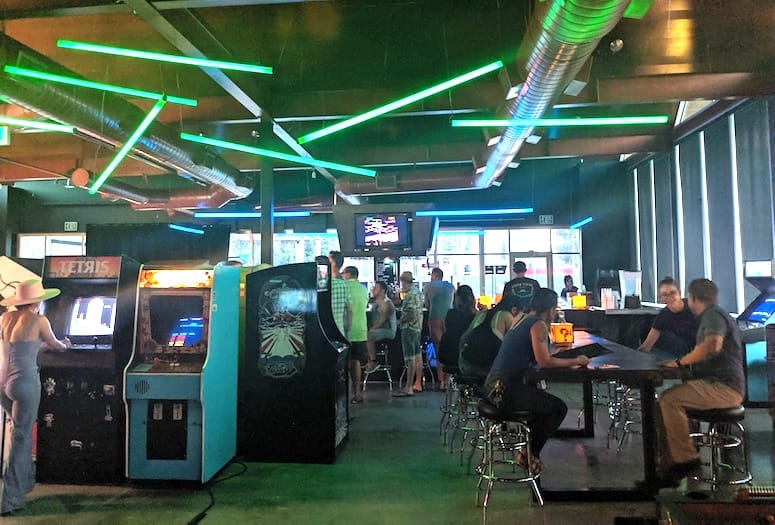 Glitch Palm Springs will be open Thursdays through Saturdays during the summer.
PHOTOGRAPH BY KAY KUDUKIS

It’s 7:30 at Glitch on Friday night, and players are lined up to pay the minimal $10 cover that will get them into the arcade’s inner sanctum to gain free access to over 24 video games just waiting for a new high score.

There is already a crowd inside, but there is always room for more because the sheer size of the space is astounding. As your ears adjust to the sounds of the games, and the well-curated 1980s and ‘90s playlists emanating from the sound system, your eyes notice all the little design touches that add to the authenticity of the era.

Lots of games for sure, but also pockets of vintage mini-rooms dressed in 1980s basement with well-used couches, boom boxes, and retro posters. Old-fashioned banquettes in bright purple line the window and, on the other side of the room, a huge oval bar serves classic cocktails, beer, and tasty, non-alcoholic concoctions you can boost with a shot of CBD or Kava. To the east of the bar, a ping pong table, and old TVs pocketed in the wall playing ‘80s and ‘90s movies.

There is a dog-friendly open atrium with a big screen also playing ‘80s-themed movies, picnic-style tables where you can eat, drink, and play life-size Jenga, Connect 4, or any of the other board games available. 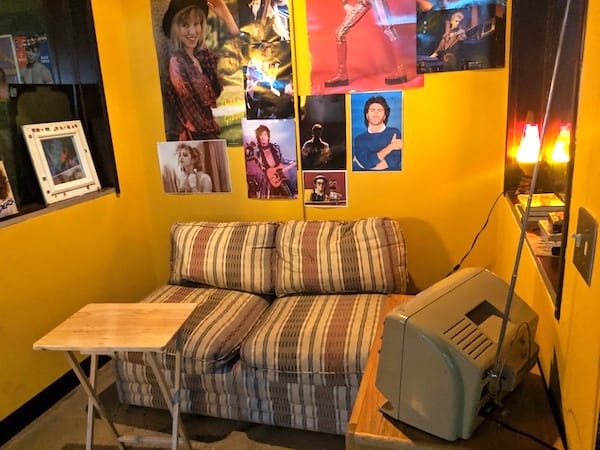 Part of Glitch’s charm are these mini-rooms decked out in appropriate vintage materials.

Glitch is the brainchild of Stephen Hansen and his wife of three months, Liz Kao. Oddly, it wasn’t the idea that came first, it was the space. “We were looking at it as parking space for another venture I was involved with,” says Hansen, “but when we stepped inside…” They let their imaginations run wild and Glitch was conceived.

The couple met in classic 2000s style – on the internet. Their first date was at Birds and Bees Lounge in downtown Los Angeles, where they talked into the wee hours. The self-described nerds had a lot in common including a love of arcade bars which they frequented while dating. One small glitch kept the relationship from being perfect: Kao traveled extensively (she has family in Cambodia and Thailand) but Hansen much preferred ground travel to air travel.

“I have a fear of flying,” explains Hansen. “Liz challenged me to overcome that. Our first trip was to Barcelona and I fell in love with being immersed in another culture.” That experience outrivaled white-knuckling it on a plane, and soon they were off to Cambodia and Thailand to meet Kao’s family. 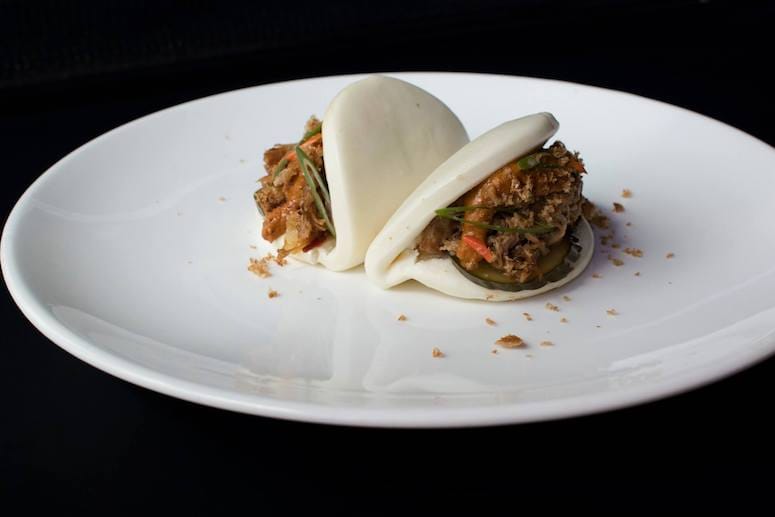 Here, Kao introduced Hansen not only to her family, but to hawkers, open marketplaces where every iteration of street food was available to be tried. It was kismet; Hansen fell in love with the culture, the food, and with Kao.

So, when it came to choosing a menu for Glitch, the couple decided to introduce Palm Springs to their favorite, Southeast Asian street food. Kao describes it as “salty and sweet, contrasting flavors” which they serve with a wide choice of proteins including squid, impossible burgers, pork belly, spam and tofu. Kao and local chef de cuisine, Christian Sia, blended their memories and flavors creating an extensive menu of their favorite Cambodian and Thai dishes.

Kao is particularly proud of their fusion dipping sauce made with vinegar aioli and Sambal chili, an Indonesian sauce created using ground chili peppers with shallot, garlic, and shrimp paste. Although it sounds like an Asian tapas bar, the menu is separated into light, medium, and heavy options so you can order according to your level of hunger.

Authenticity is important to Hansen, so many of the games have their own story. In the retro section, Centipede was sourced from a woman who had originally bought it as nostalgic fun for her husband. They had met playing the game in the ‘70s. The marriage didn’t last, but the game was in pristine condition when Hansen purchased it. “It even has the original manual,” he says. 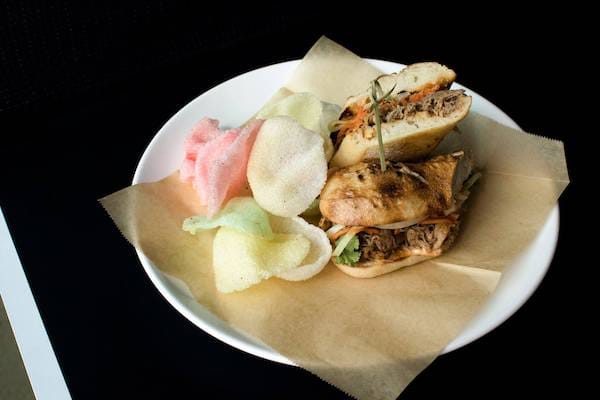 Hours: 5 p.m. to midnight Thursdays, 6 p.m. to 2 a.m. Fridays and Saturdays. Closed Mondays through Wednesdays during the summer.

Parking: plenty of parking in their lot, and off street. 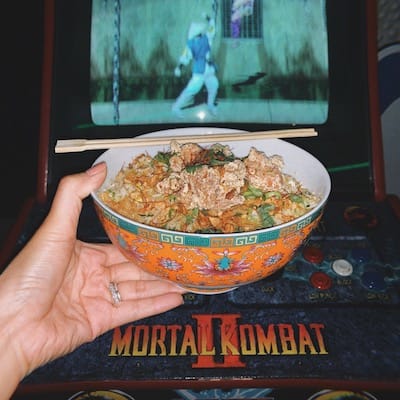