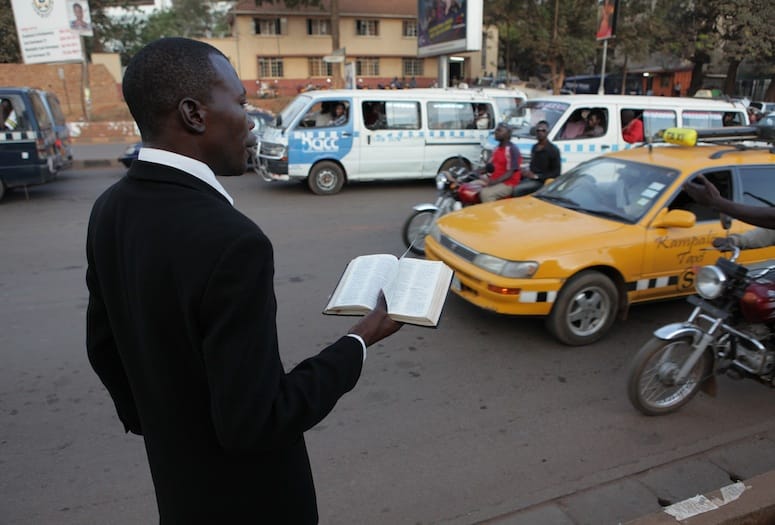 A street preacher in Kampala, Uganda, is captured during the documentary, "God Loves Uganda", which will screen during the American Documentary Film Festival, March 27-31, in Palm Springs.
Photos by Derek Wiesehahn

America's culture wars have a new home base.

It's an unsettling reality revealed in God Loves Uganda, a powerful and chilling documentary about American evangelicals who have latched onto Uganda as fertile ground for spreading their gospel of intolerance to change African culture with values from the U.S. Christian right.

God Loves Uganda is scheduled to screen March 28 during the American Documentary Film Festival at Camelot Theatres in Palm Springs. Filmmaker Roger Ross Williams will be present for a Q&A after the screening.

Williams, who received an Academy Award for Best Documentary (Short Subject) in 2010 for his film, Music by Prudence, recently spoke with Palm Springs Life about the making of God Loves Uganda, gaining access with the missionaries, and his effort to raise awareness about abuse of religious power. As a gay man who grew up in a religious family, Williams has had a lifelong desire to explore the power of religion to transform lives – or destroy them. One of the first people Williams met on a research trip to Uganda was David Kato, an activist who would, sadly, become a victim of violence sparked by evangelical anti-gay ideology.

“David was paranoid when I met him. He had been attacked and beaten many times, as all the activists in Uganda have been. They’re edgy and nervous,” says Williams. “But he was particularly paranoid, and rightfully so. His brutal death was devastating, tragic.”

It was Kato who inspired Williams to make God Loves Uganda. He told Williams there are lots of films about Uganda, but the untold story was the damage American fundamentalist evangelicals are doing in Uganda, and the insidious nature of their aggressive effort to harvest young, unclaimed souls to preach a gospel of love intertwined with a gospel of intolerance.

Williams knew it would be dicey terrain, but he felt he could connect with the missionaries on a gut level. He understands religious passion and speaking in tongues. It’s not strange to him. He grew up in an African American Baptist church, and hails from a family of ministers. His sister is a minister. His father is a leader in his church.

“When I first arrived at the International House of Prayer (IHOP) in Kansas City, they said, ‘Oh you're part of the gay agenda.’ I told them I'm not part of an agenda, I'm a filmmaker, and you can speak for yourselves,” Williams says. “It's your words and your message, and if you believe in that, then you should stand up for it.” It was an effective strategy for Williams. The missionaries not only stand up for their beliefs and mission in God Loves Uganda, they do so terrifyingly so, with smiles and hugs while spreading hateful anti-gay rhetoric. By letting the missionaries tell their own story, Williams gained access and a tentative trust with them.

“I had no idea I was going to follow the missionaries to Africa when I started making this film,” says Williams. “That's something that happened organically, in the process of filming at IHOP, and it was a process to get access. It wasn't easy. It was very difficult because they were nervous about me following them.”

In fact, Williams says, they had a public relations person “chaperone” him during the filming in Uganda to make sure no one got off topic. He soon discovered the mission of IHOP was part of a larger Christian evangelical movement in Uganda that promotes biblical law as the ultimate law. Their message is everywhere – from street preachers shouting gospel to drivers and pedestrians, to stores with names like “Holy Face of Jesus Pharmacy,” “Born Again Brokers,” and “Party for Jesus Shoemaker.”

Williams was in the right place at the right time. The evangelical movement fueled Uganda’s anti-homosexuality bill and religious fervor was peaking as missionaries preached their message of intolerance throughout the country. Ugandan President Yoweri Museveni signed the bill into law in February. With its passage, Williams says newspapers are publishing names and addresses of homosexuals, prompting a human rights crisis – and mob justice.

While the film has garnered critical praise, Williams is hopeful the Christian community will understand the true message of the film.

“I have learned that the hardest part of campaigning for tolerance and justice is encouraging people to look at their own selves, to examine their own identity and shortcomings. Rather than argue that my film is persecuting them, evangelicals should speak out against violence and intolerance. I encourage evangelical Christian leaders to embrace the heroes of my film, who are in fact faith leaders who are spreading a Christian message.”