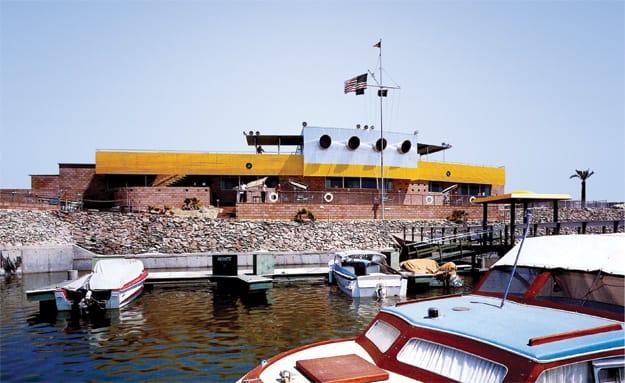 At the old North Shore Yacht Club on the Salton Sea, broken aluminum siding bangs ominously in the wind while pigeons fly in and out through the holes in the building. Apocalyptic graffiti — “Many lose the search for home” — ornaments the abandoned pool.  Yet, despite the appearance of hopelessness, this classic symbol of The Wasteland might again become an emblem of hope and prosperity — as was originally intended by its creator, modernist architect Albert Frey.

It’s not just a wrecked building we’re talking about. The entire North Shore community has been battered by the economy. To make things worse, the Salton Sea itself has been dismissed and maligned by national media.

Given these odds, is redemption possible for Frey’s yacht club? It may seem unlikely, yet Riverside County has committed nearly $4 million to restore the building. Architect Tim Holt of Rancho Mirage has completed the plans; and the county is taking bids for construction. Once a bid is accepted, it should be about 18 months to a new yacht club, says county spokesman Tom Freeman.

The revamped club will serve as a senior center, community center, and museum — the latter under the direction of North Shore preservationist Jennie Kelly, who has already helped bring the long-extinct boat races back to the sea. The new museum is where the tale of Albert Frey’s shimmering yacht club — with its fantastic ups and downs — will finally be told.

North Shore has always been the premier site on the sea because of its topographical charms. Highway 111 and the Southern Pacific Railroad tracks make a graceful arc through town. The Salton Sea State Recreation Area winds for 14 miles along shore, luring campers with its secret nooks. Above and behind town rise the comely Orocopia and Chocolate mountains, favorites of early landscape painters. Looking across from the V-shaped yacht club jetty (hand-built with rocks from the Chocolates), expansive views take in the Santa Rosas, San Gorgonio, and San Jacinto peaks and much of Anza Borrego Desert State Park.

Innkeeper Gus Eilers got North Shore rolling with boat and bathtub races as far back as 1927; but it was Palm Springs cowboy Trav Rogers and oilman Ray Ryan who brought Las Vegas-style glamour to the sea in the shape of the yacht club. Rogers ran the Old Ranch Club in Palm Springs. Ryan, a flamboyant gambler who later died in a gangland-style slaying, owned the El Mirador Hotel in Palm Springs and developed the Bermuda Dunes Racquet Club. The pair enlisted then-little-known architect Albert Frey to design their dream resort on the landlocked sea.

Frey was obviously delighted by the irony of building a yacht club in a desert. His playful design looked like a futuristic aluminum ship nosing through the surf, complete with catwalks, a flying bridge, masts, and lanyards. A small upper floor with porthole windows served as the crow’s nest.

When the club opened in 1962, Indian Wells resident Dan Callahan remembers towing along 23 guests. His family owned the Desert Air Hotel in Palm Desert. He used to fly down from the family airstrip, taxi right up to the yacht club clubhouse, eat lunch, and fly home. Callahan was so taken by the club’s promise that he even sold $90 memberships to Coachella Valley boaters. “I knew this thing was going to be big,” he says, noting that his sales technique was to look for a boat in the driveway, then ring the doorbell.

By the late ’60s, the yacht club harbor was thick with boats, and the Salton Sea claimed more visitors annually than Yosemite National Park. The collapse began in the 1970s with floods that broke apart the jetty. A load of agricultural runoff, caused by flooding, polluted the water. The increasing salinity of the sea clogged boats’ cooling systems. The boaters started migrating east to the Colorado River.

Kelly, who moved to North Shore in 1984, remembers the gleaming hulk as a forgotten building, used for occasional AA meetings. By the early ’90s it was shuttered, the old Commodore Room ceded to skateboarders and runaways.

The county purchased the decayed building from the nonprofit Desert Alliance for Community Empowerment. For Holt, the job of drawing up plans has been like channeling Frey: “We felt his touch all the way through the project.” His team (including architect John Anthony Rivera, who worked on the restoration of Frey’s Tramway Gas Station in Palm Springs, now a Palm Springs Visitors Center) had access to Frey’s original working drawings for the yacht club from the architecture and design archives at the University of California, Santa Barbara. Records reveal that Frey was involved with every phase of construction.

Despite the whimsy and flair Frey put into the building, Holt came to see the architect ultimately as a down-to-earth craftsman. “He was very practical,” he says. “His plans were straight-forward.”

Holt and his crew found seven or eight layers of old paint obscuring the original salmon-tinted masonry. Because Frey intended for the siding to be exposed, all the layers will be scraped away. The corrugated aluminum and Fiberglas siding was beyond repair, a discovery that sent Holt on a lengthy national search before he was able to find replacements.

As the restoration project proceeds, Kelly, founder of the East Valley Historical Society, has been reassembling the club’s past, collecting old yacht club deck chairs and matchbooks. She recently received a stash of memorabilia from Chris Metzler and Jeff Springer, documentary filmmakers who produced Plagues and Pleasures on the Salton Sea.

Kelly believes in the sea, no matter how many times glossy magazines call it freakish or forbidding. While others may doubt the county can pull off this transformation, she says, “It’s a for-sure, real thing to me.”