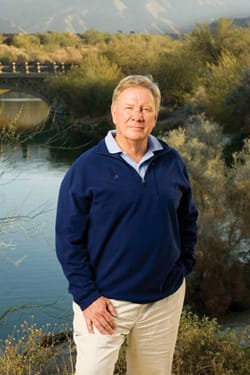 Ted Lennon is president of the board of directors for Desert Mountains Land Trust.
He’s also one of the best-known local developers.

How did you get involved with environmental activists?

This was in 1987 and I was developing The Vintage Club and was just starting to think about The Reserve Club. I knew Bill Havert, Katie Barrows, and Buford Crites — the people involved in the Coachella Valley Mountains Conservancy — and I kind of thought they had the right idea. So initially they came to see if I’d help raise funds, and my involvement grew from there.

How did the Desert Mountains Land Trust come about?

It started as a way to raise funds for the Coachella Valley Mountains Conservancy. Then the conservancy became a state-chartered organization. Once they come under [the purview of] the state, they have terrific limitations on their ability to do deals and react to things in a limited time period. So we said, “Gee, what we should do is be kind of a sister organization that can react quickly, can be entrepreneurial, and can do some great things.” We didn’t want to be political. We never politically try to stop any development. We’re just a very proactive entity that helps set aside land.

Why do you have such a dedication to the environment?

I have a college degree in civil and environmental engineering. I have an eye for detail and, I’d say, what’s beautiful. And nature’s the most beautiful thing around. As a developer, you’ve got to appreciate the right amount of open space. For myself, there’s a feeling I have of needing open space. It’s like our desert is this giant sculpture and we’re all making it what it’s going to end up being.

What else does the trust do?

We don’t just buy land. We do everything from setting up educational programs for the [Santa Rosa & San Jacinto Mountains] National Monument to cleanup of tamarisk and other invasive plants. This year, we’re going to go out and help with the eagle count in Hemet.

How is the trust viewed in other communities?

I think we’re well respected nationally. We’re able to compromise and come up with good solutions, mixing developers with Sierra Club people. There are more people recognizing the value of green building, solar [energy], and open space. The marketing people are telling us there’s money in that. It used to be everybody had to build on a golf course to make money. Now they’re telling us that open space is just as valuable as being on a fairway. If you have that in your yard, that’s a great value.

What would the valley look like without the trust?

I think there are 80,000 acres of developed property in the Coachella Valley, and they believe another 80,000 will be developed by the year 2060. Our group has been involved in setting aside 30,000 acres of open space. So we’ve played a real part in what the valley looks like today.