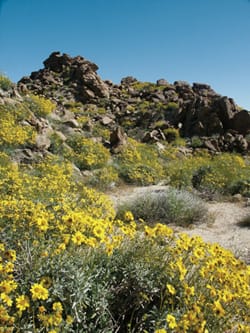 The group then negotiates to purchase the land from private sellers or accepts it as a donation. To encourage people to utilize the land it saves, it also provides volunteers and support for the Santa Rosa & San Jacinto Mountains National Monument. To date, the trust has set aside 30,000 acres of open space. And yet, as CEO Roger Tansey says, “It’s the best-kept secret in the valley.”

The money to make it happen comes from a mix of private funding and grants. “It literally involves everything from getting people to pitch in dollars and quarters to getting cities to help and the state and federal government to help,” says board member and former Palm Desert mayor Buford Crites.

When developers angle to buy property, the sale is often mired in contingencies and entitlements; the trust simply buys land as is. There’s less chance the sale will fall through because a city official didn’t approve some setback. That’s attractive to sellers, as is the fact that the trust can move quickly, unlike large public agencies that also acquire conservation lands.

The process works for an increasing number of land trusts throughout the country — about 150 in California alone. “What’s neat about land trusts is they draw together local folks who know and understand what places are significant in their community. These are not huge public agencies,” says Darla Guenzler, director of California Council of Land Trusts.

The more local the leadership, the better, she adds. That’s an endorsement for Desert Mountains Land Trust, founded and operated by people who have roots in the Coachella Valley. Along with Crites, the board of directors includes Bill Havert, executive director of Coachella Valley Mountains Conservancy; Katie Barrows, associate director of the conservancy; Ruth Watling, a desert horticulturist and landscape designer; and Ted Lennon, developer of The Reserve and Stone Eagle projects.

They first came together in the 1980s, when residential and commercial development began to threaten the mountains. In particular, the Ritz-Carlton hotel project in the hills above Rancho Mirage ignited their activism.

“The whole Ritz-Carlton issue brought to people’s attention that the mountains are sacrosanct and that they were not protected,” Havert explains. “That galvanized people, and there was this convergence of elected officials, developers, and environmentalists.”

The hotel was built, but the opposition group went on to become a powerhouse for mountain protection. “We lost the battle but won the war, you could say,” Barrows claims.

From this nucleus came Coachella Valley Mountains Conservancy, a state land protection agency, and Desert Mountains Land Trust, the conservancy’s nonprofit sister organization. Many of the same people were behind the establishment of the Santa Rosa & San Jacinto Mountains National Monument.

Barrows says that when she and her friends gathered supportive signatures in the 1980s, the valley was so relatively pristine that people would say, “What growth?”

Today no one says that. “Now we’re looking at the last remnants of the natural areas,” she says. “Land on the toe of the slope adjacent to development is, for the most part, too expensive. It comes down to where do you put your dollars?”

As the valley has grown, the trust concentrates its efforts on parcels in the mountains and remote canyons. They are rarely in competition with developers because their aim is different. “Most of the stuff we buy is relatively inexpensive per acre,” says Lennon. “You don’t see us out there paying $100,000 an acre.”

If you picture this group as a bunch of slogan-spouting, Berkeley-style greenies, you’re mistaken. The Coachella Valley has spawned its own brand of environmentalist: savvy community leaders who work with local and federal agencies — as well as developers — and who don’t oppose well-thought-out growth.

Desert Mountains Land Trust stays out of controversies such as the debate about proposed development in Chino Canyon along Tramway Road. “We are totally apolitical,” Tansey says. The stance allows them to work with people all over the ideological spectrum.

In a move reflecting its maturity, the group recently changed its name. (Lennon says the old name, Friends of the Desert Mountains, made him think of the TV show Friends.) It also hired real estate attorney and Harvard University graduate Tansey as its CEO.

The board of directors includes such seemingly disparate characters as Sierra Club activist Joan Taylor and Fred Bell, executive director of the Building Industry Association’s Desert Chapter. Despite the potential for knockout brawls, board members actually go home from meetings recharged.

“We don’t always think the same on everything,” Lennon says, “but we’ve gotten along for all these years, and we work everything out.”

Each board member has studied topographic maps and knows the boundaries of local Forest Service and Bureau of Land Management lands, along with the location of migration and travel corridors essential to wildlife. The Whitewater corridor, for instance, is one of the few places along Interstate 10 where black bears, mountain lions, and desert tortoises can safely cross from the San Gorgonio to the San Jacinto mountains.

In the future, the group will target lands there and in another wildlife corridor in the Indio Hills, as well as property along Highway 74 (“It won’t [still] be a scenic highway if it’s lined with houses,” Crites says), and Martinez Canyon, a gateway to the remote Santa Rosa Mountains.

“The key to good land management is having contiguous parcels of land, not chopped-up pieces,” Lennon says. “We’re constantly working on that.”

For instance, when development of a new city threatened a wildlife corridor between the Coachella Valley Preserve and Joshua Tree National Park, the trust and other groups negotiated to purchase and preserve the land.

“They’re very aware of the critical parcels,” says Jeff Morgan of the Sierra Club.
The motives of sellers vary; but in every case, the trust offers a fair market value, based on an appraisal, and only buys from willing parties. In some cases, sellers are swayed by assurances that the land that’s been in their families for years will remain as is.

That was certainly the case with a parcel near Martinez Canyon in Thermal. Ruth Goodan Applegarth purchased 480 acres there in 1954 and raised her family on the land. She never dreamed that country clubs such as Trilogy would creep within shouting distance of her home and that land purchased for $17 an acre would today be worth as much as $100,000 an acre.

Applegarth sold off land over the years, but retained 40 acres on the slope side, just below the shoreline of ancient Lake Cahuilla. She could have taken her pick of developers eager to own the land. However, her daughter, Sue Adams, was on the Desert Mountains Land Trust board, and Applegarth liked what she heard about the land being protected.

Today, at age 90, Applegarth still lives in her family home on land that has historical and cultural significance (ancient Indian fish traps are nearby). Upon her death, the trust will take ownership of the property and the land will be preserved forever. “Her chair is in the living room still facing the valley where she’s looked out for 50 years,” Adams says. “She feels good knowing there are not going to be million-dollar homes there.”

The trust’s most recent “save” involved Whitewater Trout Co., built in 1939 by John Shearer, who located his business in a pristine canyon that is a gateway to the San Gorgonio wilderness. The family owned the land for 60 years, then sold it in 1998. Over the years, developers kept their eyes on the place (there are even plans for a 79-home development complete with golf course). If others had their way, the property could have become a paintball emporium or off-road track.

But when Desert Mountains Land Trust heard the owner was selling, it stepped in and bought the land. The trust does not manage land for recreational use, so it often passes it on to an agency such as the BLM or Forest Service. In this case, the trust donated the 291 acres to the Wildlands Conservancy, a group based in Oak Glen that also operates the Pipes Canyon and Mission Creek preserves.

The conservancy is busy turning Whitewater into a premier outdoor portal, with a preserve ranger and manager on site, as well as hiker access to the Pacific Crest Trail and San Gorgonio backcountry.

You’ll probably never see a sign saying “Saved by Desert Mountains Land Trust.” But the very fact that you will be able to stroll under the lush cottonwoods and alders of Whitewater Canyon tells you all you need to know.

2 Coachella Valley Mountains Conservancy is a state agency focused on acquisition of conservation lands. It is linked to Desert Mountains Land Trust; some of the same people serve in both groups.

3 The Wildlands Conservancy is a nonprofit corporation based in Oak Glen that purchases and manages conservation lands, with an emphasis on outdoor education. It is best known locally for Pipes Canyon Preserve, Mission Creek Preserve, and — soon — Whitewater Preserve.