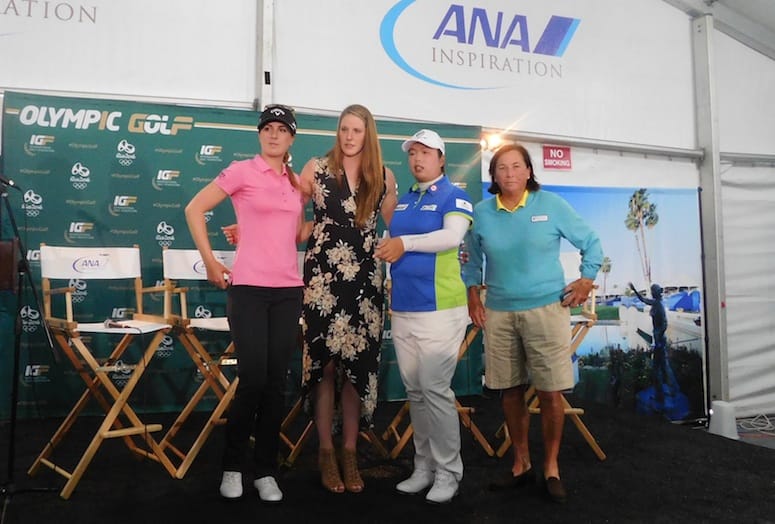 You can find gold at Mission Hills Country Club in Rancho Mirage.

Arianna Huffington, co-founder of the Huffington Post Media Group, also appeared to share her unique perspective to a packed house.

The conference was created to have famous women share their amazing stories of success while trying to inspire others.

Franklin reflected on the first time she swam in the Olympics and the emotions that accompanied her jumping in the water.

“It was a chance to showcase my skills, all my training, all my hard work, “ Franklin said. “And when I stood up on that podium, watched my country’s flag be raised, and heard our National Anthem, I was overcome with emotion.”

The 20-year-old Franklin is just as emotional when it comes to being cast as a role model, and influencing young women.

“I take the responsibility of being a role model seriously,” she added. “We are able to use our unique talents, this fantastic platform we are in to influence, in a positive way, a generation of children.”

She was born in Siberia, but adopted at the age of 13 months with fibular hemimelia, a condition that caused her legs to be amputated at 18 months old.  Her adoptive parents lived in Maryland where Long eventually excelled as a swimmer.  The rest is history.

Long is the most decorated Olympic athlete of her generation, winning 12 Paralympic Gold medals from 204-2012.  In 2006, she won an astounding nine Gold medals at the International Paralympic World Championships. She has won three ESPY’s as ESPN’s Female Athlete of the Year with a disability.

“This is a celebration of women’s achievements,” said Long. “I am proud to be here.”

Vonn is one of only two women – Annemarie Moser-Proll is the other – to win four World Cup overall skiing championships. She is the only American woman to ever win the Olympic downhill — in 2010.  In 2016, she won her 20th World Cup crystal globe title, making her the most decorated skier of all-time.

Vonn, who is out this year with a knee injury, expressed gratitude for her career and for women athletes in general.

“I am excited to be on an amazing panel with these incredible athletes,” said Vonn.

The presence of so many Olympic Gold medal winners was fitting since golf returns as an Olympic sport starting this summer in Rio de Janeiro.  The last time golf was part of the Olympics was 1904.

The return has the women on the LPGA excited. Shanshan Feng, who will represent China, couldn’t contain her enthusiasm.

“I look around me and see all these Olympic athletes and it gets me excited,” she said.  “I hope I can represent China in golf until I am 70.”