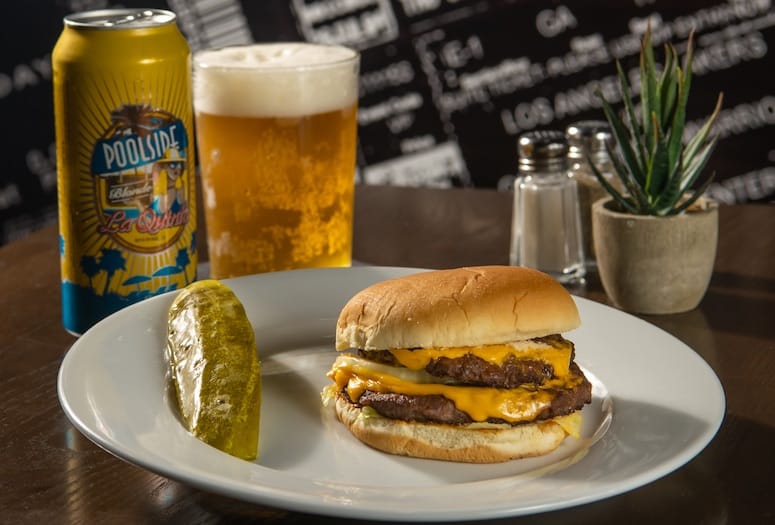 Feast on this Double Cheeseburger with a La Quinta Brewing Poolside Blonde beer as part of the bar menu at Little Bar in Palm Desert.
PHOTOGRAPHS BY CHRIS MILLER / IMAGINE IMAGERY

Skip Paige plays hard, and he works hard. He retired in 2017 and has since racked up 62 stamps on his passport. It seems he’s always going, even back when he was at Cal Poly Pomona with chum Paul Tollett, majoring in finance real estate and booking bands on the side. Tollett, now president and CEO of Goldenvoice, was majoring in chemical engineering and worked for Goldenvoice back when Gary Tovar was in the picture.

But now Paige is spending part of his time in Palm Desert where he has opened Little Bar. We're having coffee seated on the brand new red banquettes abutting the wall; behind us, custom black and white wallpaper I haven’t yet examined because Paige is such a great storyteller.

He is telling me how Goldenvoice came to be one of the most remarkable success stories in the world of concert promoting. The story involves drug dealers, the Thai Royal Navy, a truck full of weed, and a conveyor belt built by an Army Ranger. That’s actually Tovar’s story. “Gary did punk rock concerts at the Grand Olympic Auditorium, which went on to be pretty legendary. Then Gary got arrested for trafficking pot. Like warehouses full."

I settled in; I love a good story.

“Gary’s a little bit like Trump. He tells these stories, but I'm not sure if they're true or not. But Gary got arrested. He owed the guitar player in Black Flag $100,000 on a pot deal. So Gary sold the company to Paul and Rick Van Santen and was like ‘you owe him (Black Flag guitar player) $100,000 and you have Goldenvoice.' 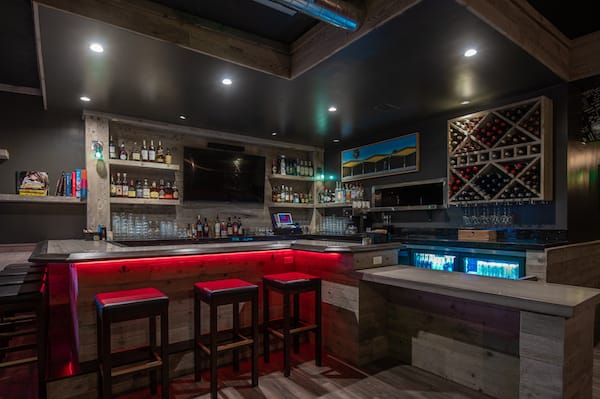 The bar has a gray wood exoskeleton set off by light gray wood tiles.

Nirvana was just breaking at that time when they bought it and they knew all these bands. Nirvana and Pearl Jam just exploded at that moment, Rage Against the Machine, all these bands. So, in 1991, Paul and Rick bought Goldenvoice and they built it up.”

When he speaks about Tollett, it’s with friendship, and a dash of reverence. “He’s genius and awesome in a way that he's pure. He would prefer to watch The Clash on a stage with no lights.” Since the beginning there have been no sponsors on Coachella stages. “That’s just him,” Paige says.

A delivery person enters, and I have a chance to check out the wallpaper. Created from tickets to all of the concerts Paige has attended, and also some Dodgers and Lakers tickets, with the majority promoted by Ticketmaster. He points to a Pretenders ticket. “That was the best show I've ever seen, the Pretenders at the Roxy ... she's so badass. It was just 300 people and it was awesome.” He points to others, “Guns N Roses, Metallica, Grateful Dead, Eagles, Stephen Stills (his first concert at age 9) The Ramones, The Rolling Stones, Oingo Boingo (his favorite band)…” 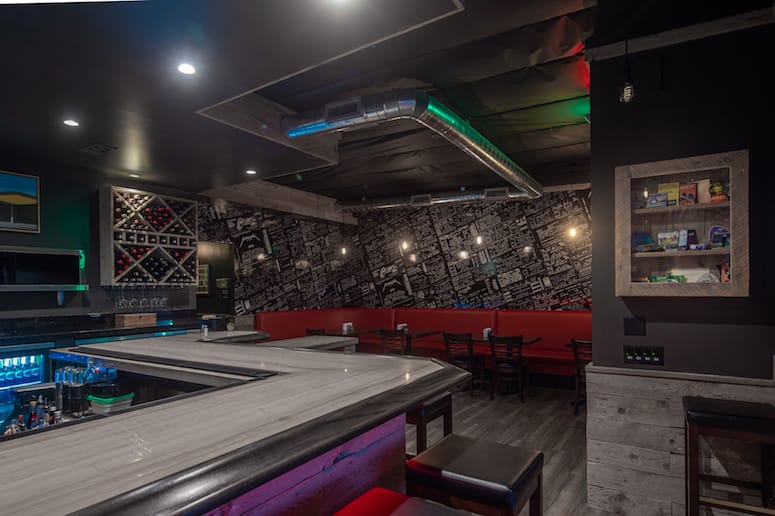 The wallpaper is created from tickets to all of the concerts owner Skip Paige has attended, and also some Dodgers and Lakers tickets, with the majority promoted by Ticketmaster.

Paige points out a little library shelf in the corner. It’s a short walk (everything is a short walk) across the light gray wood tiles, past the bar’s gray wood exoskeleton to check them out. “So there's two Taschen books over there. And coffee table books: one of Capitol Records and all their album covers that somebody gave me; and one about Los Angeles,” Paige tells me. “I would love it if people would come and sit here and grab a book and eat a burger. That would be cool.”

Besides burgers, there are tacos, green salad, tater tots, french fries, chips and salsa, and Paige says the chefs will have a daily special. He’s pretty excited about mid-week. “What I'll probably do is on maybe Wednesday, Thursday nights, I'll have a private dinner. We figure we can sit about 18 people in here for a sit down meal. So I could get 18 people in here and say, for $100 bucks I'll make you prime rib and pour you some good wine. Then 10, 10:30, we open it up to the public.” That's when their craft cocktails headline.

Breakfast will be served, but only on Saturday and Sunday when the former owner takes over for Breakfast with Randy (the two became friends during the selling process.)

“During the day, I want to be known for good food and burgers, you know. I want the guys that are working, the cable guy or the construction guy, they come over here and they sit down and get some burgers and an iced tea and watch SportsCenter for a half hour. Then at night, we'll make it dark and cool,” Paige says. 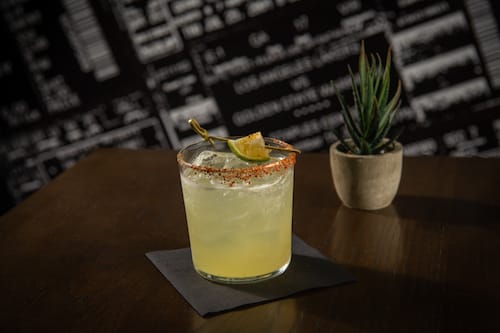 The bathroom is a must see, but expect a line because behind that beautiful red door are not only the usual restroom amenities but four wonderwalls, each filled with pint-sized bits of framed memorabilia like backstage passes, all-access laminates, concerts, and some of his favorite albums. It's magnificent.

I ask him what his favorite part of the bar is. “They asked me that yesterday. I talked about the bar and the bar top and all that. But actually it's the door.”

It’s a bit of a wink, that door. It’s a huge portal into a place that only has capacity for 31 guests, a space smaller than Paige’s living room. One of their staffer T-shirts reads “Little Bar, Big Door.”

The other thing you should know about that door is that it has a speakeasy-style peephole, so your host for the evening can let you know if there’s room inside. The patio seats 18.

We’re saying goodbye when Paige makes a realization; his whole career at Goldenvoice was about keeping sponsorship off the stage, but his wallpaper? "It looks like we're sponsored by Ticketmaster," he says laughing. The irony is not lost on him. 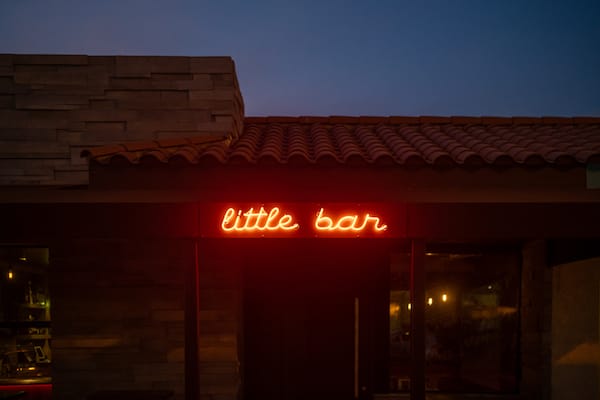