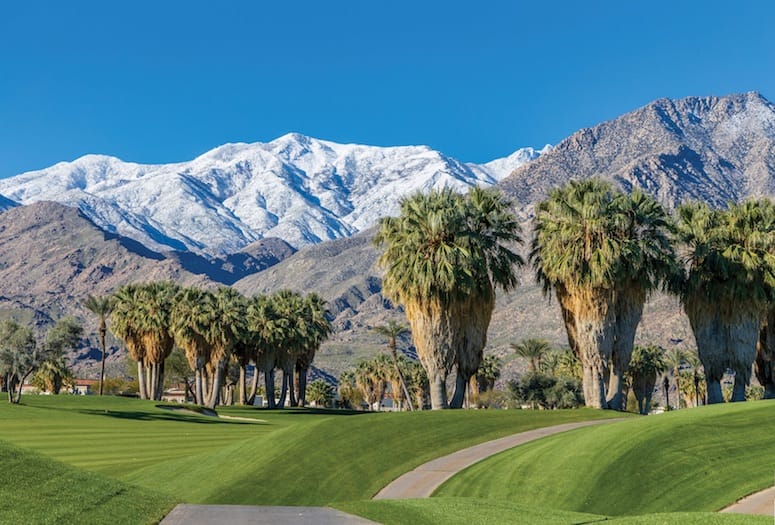 A golf ball can cause plenty of joy and pain while out on the lush greens of the Indian Canyons Golf Resort in Palm Springs. Despite weighing 1.62 ounces and spanning a mere 1.68 inches in diameter, it can be your friend or foe and earn both praise and then disdain in a matter of seconds. Unfortunately, it rarely listens to your requests, no matter how desperate the pleas. Just ask any golfer.

Golfers may not know everything about outer layers, inner cores, ionomer resins, or other unpronounceable ingredients that now go into making them, but they do know the golf ball has evolved over time. The first versions created centuries ago were rumored to have been made from wood — a bit impractical, so a significant step forward came in the early 1800s with the “featherie” ball, so named because of the boiled goose feathers used to fill up a small leather sack that was then stitched up and painted.

Another key milestone occurred in the mid-1850s with the introduction of the gutta percha ball, made with a gum-like material (derived from trees) that was then heated and formed into a round shape, a process that led to faster and more efficient ball production. “The biggest step ever was probably from the featherie to the gutta percha,” says Steven J. Quintavalla, Director, Equipment Research & Testing, at the United States Golf Association (USGA). “The Haskell ball [developed with a more modern rubber core by American Coburn Haskell in the 1890s] was a huge improvement over the gutty, but in terms of performance and expense, I imagine that the gutty did more to broaden golf’s availability and appeal than any other ball technology.”

The separate layers that make up a golf ball work in sync to affect the ball’s overall performance and efficiency.

The mantle can help reduce or cut down on the spin generated by the high-energy core. In the past, early mantles consisted of rubber bands; today they are made of synthetic rubbers and plastics. Some golf balls have up to three mantles, while others (like the Titleist ProV1, available at the Indian Canyons Golf Resort pro shop) have none. 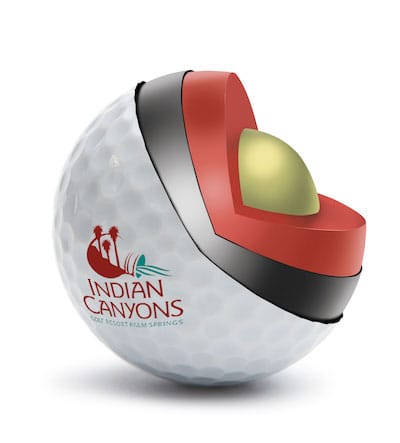 The INNER Rubber core absorbs much of the energy during a player’s swing and can deform over time.

Dimples were added to golf balls around the beginning of the 20th century to reduce air resistance and increase trajectory. “We have seen as many as 1,016 [dimples per ball], though many of those were essentially pinpricks,” Quintavalla says. “The current most popular designs are in the low to mid-300s due to aerodynamic considerations.”

According to Quintavalla, the most significant advances in the past 25 years have been the use of thinly cast polyurethane covers (“This is what has enabled the modern, solid-core TOUR-level ball,” he explains) and the organosulfur catalysis of cis-polybutadiene to trans-polybutadiene during peroxide cure, which has “enabled the combination of long and soft that was unavailable previously.”

There are currently 1,289 golf balls on the USGA’s conforming list. Mary Ann Quijada, Head Golf Professional at the Indian Canyons Golf Resort, says the Titleist ProV1 is one of the most popular balls sold in their pro shops.

“I have used the ProV1 since it came out on Oct. 11, 2000,” she continues. “I find it to be a consistent ball, with a softer feel for the short game without sacrificing distance.”

Quintavalla adds that the USGA’s testing process takes anywhere from two to three weeks, “depending on the number of balls submitted — we have had more than 100 in some months — but there are also quality checks and administrative functions that need to take place prior to publication,” he explains. “In all, it is about a month between receipt and publication.”

Without dimples, a golf ball hit by a professional player would travel only half the distance.

Not everyone is thrilled with the advances. “The golf ball has gotten ridiculous,” Jack Nicklaus said before the 2019 Masters. “The golf ball from 1930 to about ’95 gained about 6 yards. From 1995 to 2005, about 15 yards, and that’s a big difference. Probably, the organizations won’t tell you that, but that’s exactly about what happened.”

In addition to going farther, golf balls may soon be getting a lot smarter. OnCore Golf, an innovative golf ball manufacturer, and CHIP’d, an Internet of Things company, are developing a golf ball that will incorporate the latest in GPS, Bluetooth, antenna, and battery design. You’ll be able to check your phone for all of the stats about each shot — but odds are the ball still won’t always listen to your pleas!