Wearing his mask, Thomas gets ready to tackle 18 holes at Desert Willow Golf Resort on April 25.
PHOTOGRAPHS BY THOMAS MEAGHER

When Riverside County lifted its restrictions on April 20 and golf courses began reopening, I booked a round on April 25 at my favorite local track, Desert Willow Golf Club. Coachella Valley courses have sat inactive for a month after being ordered closed by the county because of coronavirus or COVID-19.

I had not swung a club in awhile and I couldn’t wait to get back out. But what would the new socially distanced normal be like? Here are a few first impressions:

• Booked my tee time online and pre-paid, thereby eliminating the usual golf-shop check-in. Instead, I was directed straight to a waiting cart by outside service staff, all of whom were wearing face coverings.

• I also had my neck gaiter on and pulled up to cover nose and mouth. I kept it that way during the new check-in process.

• I was assigned my own cart. It was a stripped-down ride: no scorecard, no pencil, no container of seed mix to fill-in divots.

• The practice range was open but we were encouraged to keep our warm-up to no more than 30 minutes with social-distanced spacing maintained. We were also told to use our own golf balls on the putting and chipping greens

• I was paired with three young men from Encinitas: their courses are still closed, so they had made the trip to Palm Desert.

• No handshakes during introductions. (Nor later at the end of the round, although we each turned our putters upside down and did crossed-sword versions of high fives.) 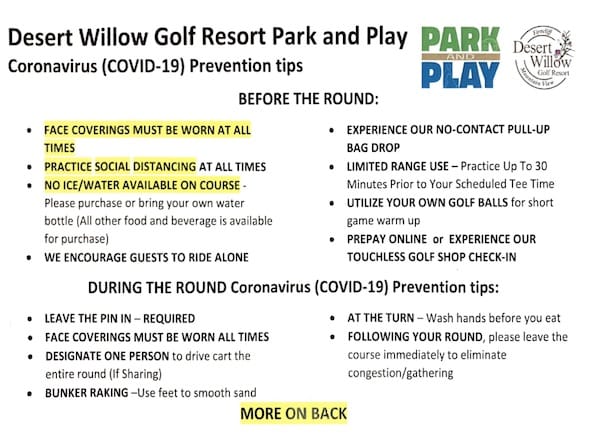 Golfers are greeted with a handout detailing safety precautions for golfers to practice on the course. A second page details what steps the course has taken to make the playing experience safe.

• Like me, my playing partners had face coverings in place, and we all kept them on as we teed off from No. 1. (“I have played this game for 50 years,” I announced, “and this will be the first shot I have ever played masked. Stand well back.”) Thereafter, we kept the masks in place except for a few moments every now and again.
I was surprised. I had expected that this rule might not be followed at all. But our foursome ended up being very scrupulous about it. Indeed, so were most of the other golfers I encountered. But there were some, of course, who seemed to think that they were showing gutsy independence by going mask-less.

• Out on the course, there were no ball washers, no water coolers, and no rakes in the sand traps. (Since I have ended up in unraked footprints even when there were rakes, I decided to just play the ball as it lay whenever I was bunkered. Good stoic practice.) The pins stayed in and the cups had been modified: a styrofoam ring kept a holed ball from dropping down; instead, the ball could be extracted from the cup with a two-finger pincer-pick move (at which I improved at tremendously over the course of 18 holes).

• Some things, happily, were unchanged: the fairways, the rough, the greens, my maddeningly inconsistent game. And, believe it or not, the camaraderie: even from behind masks and from separate carts, the four of us were able to be social despite the distancing. For a couple of hours, we were a foursome, sharing with each other the pleasure of good shots, offering silent sympathy when shots went horribly astray, and making conversation about the strange times through which we are living.

So, all in all, then, the biggest adjustment I had to make to golf’s new normal was wearing a face covering for an entire round in 104 degree afternoon heat. 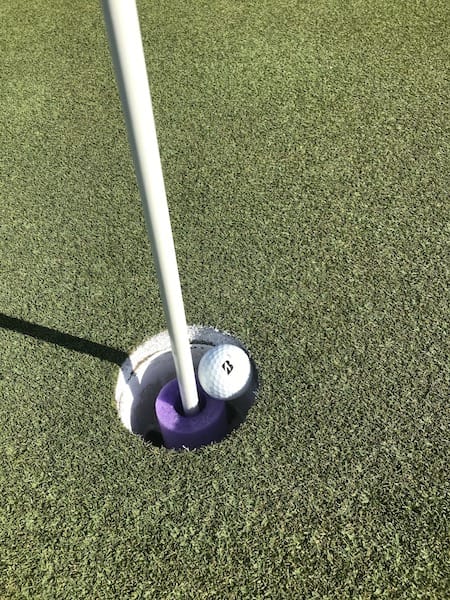 A styrofoam ring keeps a holed ball from dropping down, and makes it easy to retrieve with your gloves.

Despite the restrictions the coronavirus has caused us to live with over the last two months, it was, on reflection, such a small price to pay for being able to be back out on one of the Coachella Valley’s beautiful golf courses.

• READ NEXT: What Golf Courses Have Reopened in the Caochella Valley.