How to make old-fashioned tamale 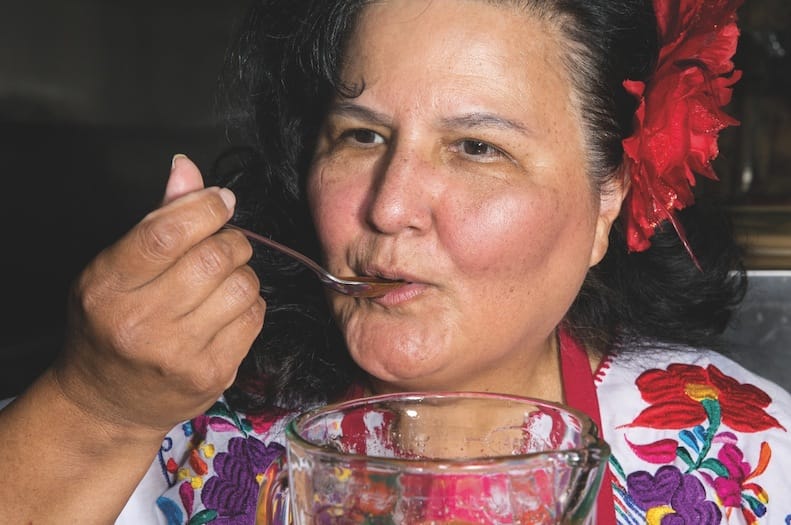 Becky Montes doesn’t use a recipe; she cooks by taste.
PHOTOGRAPHY BY JOE TORENO

Becky Montes has been making tamales for 25 years. Usually, the process is a group social activity, but today it’s a lesson. I am the student. Shortly after I arrive at the church where she’ll teach me, an Italian-Polish girl from New Jersey, how to make the popular holiday dish, she informs me that she doesn’t use a recipe. She knows by heart everything that’s needed for each tamale, but measurements can change on the fly depending on all kinds of factors. Perhaps most important among them: the consistency of that day’s masa, a blend of coarsely ground corn, lard, spices, and water.

“If the masa I get is drier, I put more broth. If it’s softer, I don’t put as much. It just comes naturally after you know how to do it,” says Montes. During our afternoon in the commercial kitchen of the Apostolic Church of Indio, we thoughtfully add seasonings between tastes, study the masa for texture, and hold cornhusks to determine if they weigh enough to add another dollop of dough. “You just get a feel for it,” she says.

In theory, a traditional Mexican tamale is simply masa that’s mixed with fat and filled with ingredients like meat or cheese, then steamed in a cornhusk to create the perfect, portable meal. But a tremendous amount of work goes into getting there, from cooking the fillings to mixing the masa to hand-rolling each tamale. “It’s not hard,” Montes insists. “It’s just time-consuming.”

All that time is partly responsible for turning tamale-making into a social event. Members of families, communities, and parishes joyfully come together to churn out tray after tray of the specialty that’s often served at big events and holidays. At Indio Apostolic — where Montes, who is married to Head Pastor Luciano M. Montes, serves as a women’s counselor — an all-female tamale-making committee convenes in the church kitchen to make various versions they sell at fundraisers, especially around the holidays. 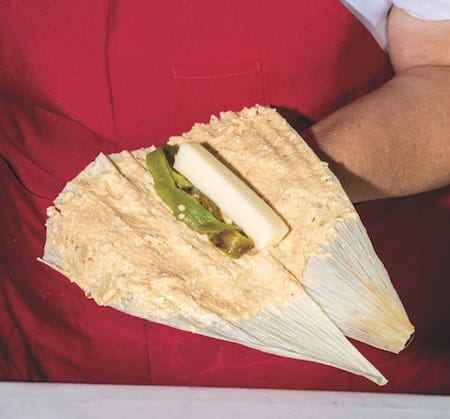 Becky Montes presents the precooked assemblage that will become a chile-cheese tamale.

“There’s a camaraderie that’s involved when you’re making tamales,” Montes explains. “It’s hard for just one person to make them, but if you have your sisters, your aunties, your grandmother come over to help, it’s just a special thing.”

Today, there are just three of us on the job: Montes, fellow churchgoer Kathy Peña, and me. We’re going to tackle “only” two types, a traditional chile-cheese tamale and Montes’ signature version, the date-filled “CV Delite.” It’s one she created to honor the Coachella Valley, her home for the last 35 years, and where she learned to make tamales.

Growing up near Fresno, her family made them frequently, but back then Montes was more interested in studying than cooking. After attending bible college, where she met her future husband, she and Luciano settled in Indio in the 1980s where he became pastor of this church, while Becky (who, like her husband, has a religious studies-related doctorate) began working at an affiliated Christian school, eventually serving as principal. When she heard about the nearby Indio International Tamale Festival, she realized it could be a way to raise money for the school. She turned to her mother and women at the church to teach her. “I never wrote anything down. I just memorized it,” she says. 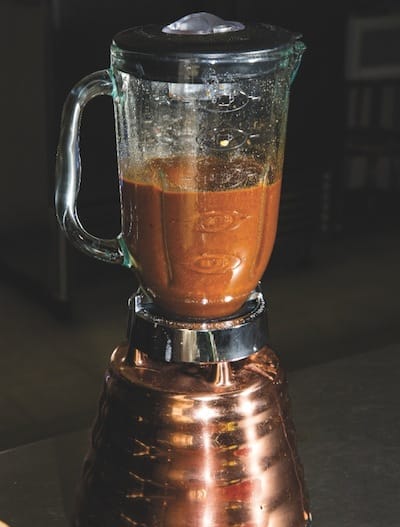 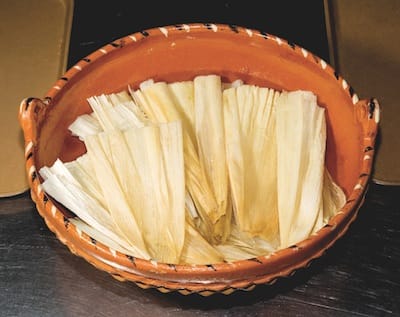 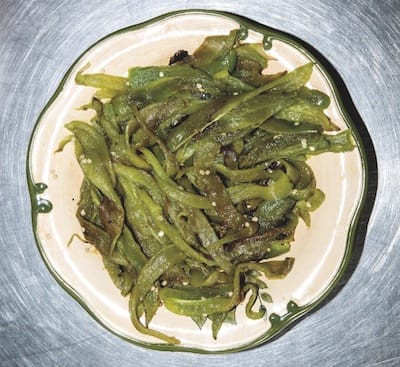 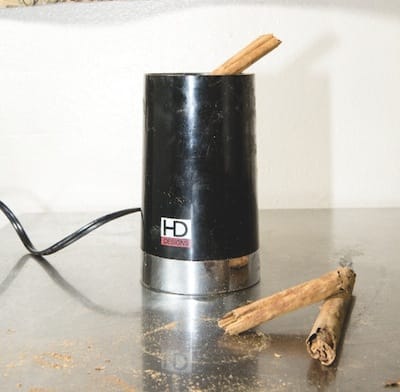 Clockwise: The perfect seasoning for the masa is achieved by introducing a concoction of pasilla chiles, cumin, chicken broth, salt, and garlic.  Roasted green Anaheim chiles will pair with Monterey jack cheese for the savory tamale.  Ground cinnamon seasons the sweet tamales. Cornhusks have been soaking in water in preparation for filling and folding.

More than 30 women strong, they entered the festival and got to work. “We’d rent freezers and start in October. Every Monday some of us would start at 6 in the morning and we would finish at 10 at night. We’d have different shifts. We had music playing and there was a sisterhood the whole time we would make them … 600 dozen,” Montes recounts. “It was not for the faint of heart.” 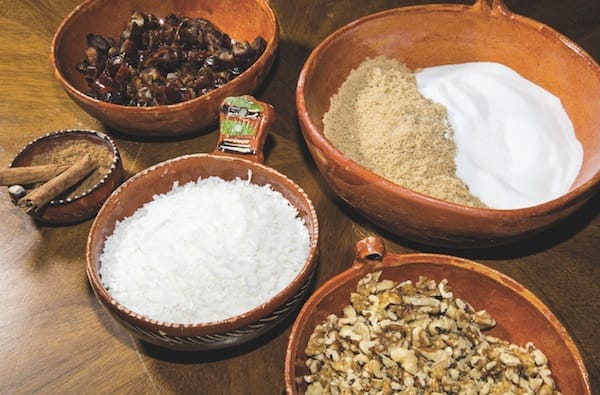 Over the years when her group participated, they sold out at the festival, raising tens of thousands of dollars for the school and taking home plenty of trophies for both tamales (the CV Delite and Montes’ other custom creation, the Piña Colada tamale made with pineapple and coconut, often placed high in the gourmet category) and their festive costumes and booth decorations. When the school closed several years ago, Montes and her crew decided to pack it in. “It was a production,” she says. “But we had so much fun.”

After a prayer in the kitchen (“We always start with a prayer,” Montes explains) we get going on the chile-cheese tamales, first creating a concentrated chile sauce meant to serve as a liquid seasoning for the masa. Montes blends soaked pasillas and California chile pods with cumin, chicken broth, salt, and plenty of garlic. “To me, if it doesn’t have garlic, it’s not a tamale,” she says. “And I don’t use garlic salt. When you use fresh products, you can tell the difference.”

Next the women toss 5 pounds of the moist masa, a pound and a half of manteca (or lard), and a bit of baking powder into a giant mixer before Montes carefully pours in some of the chile concoction and watches closely, pausing to taste and adding a bit more of the chile sauce, some extra chicken broth, and a pinch of salt here and there. She says we’ll be mixing for five minutes, then lets it go for more than 10, but doesn’t let it get too smooth.

We carry the dough over to a long folding table where Peña has brought the presoaked cornhusks. Here’s where we’ll complete the final steps, first spreading the dough on a husk (“She uses a spatula,” Montes says of Peña. “I use a spoon.”) then layering it with a finger-size chunk of Monterey jack and two slices of freshly roasted green Anaheim chiles that have the perfect amount of char.

After watching for a few minutes, I join the ladies on the assembly line and quickly make a series of mistakes. First I spread the dough on the wrong side of the husk. (The inside is smoother; it gets the dough). Next, I plop in too much dough. (I need to start with less, then spread it out.) And there’s a lot more to keep in mind: Because they need to be uniform in size, if a husk is too big, tear a bit off. 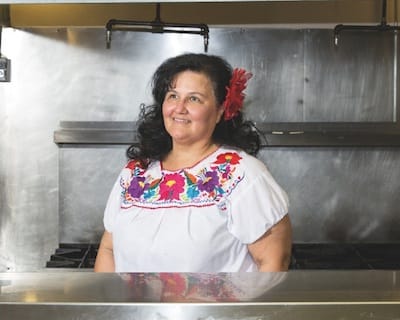 Becky Montes, in her culinary element.

If it’s too narrow, add an extra strip of underneath to widen it. Roll them tight — but not too tight — and make sure the bottom is folded over properly to ensure the dough stays put during cooking. “You’re pretty good!” Montes tells me after I have a few under my belt. She’s being nice.

Soon we have nearly two dozen ready for cooking. They must stand upright in the steamer during the 45-minute cooking process. Unbelievably (or perhaps not so in the case of Peña and Montes), we have the exact amount to fill the pot to correct capacity. Any more and some would need to sit this one out; any fewer and we’d need to fill in the gaps to keep them all propped up. As they get going on the stove, it’s time to move on to the CV Delites. We’ve got to start all over again. “You don’t just all of a sudden say you’re going to make tamales,” Montes says. “It’s an all-day thing you have to plan for.”

She assures me this version’s a bit easier. There’s no sauce to make. We simply add walnuts, cinnamon, sugar, coconut flakes, baking powder, and a lot of Crisco (this version, it turns out, is vegetarian) to the masa along with plenty of dates from nearby Shields Date Garden. “I want dates in every tamale,” says Montes. “Otherwise it kind of defeats the purpose.” Even rolling them is quicker because we’re just using the dough and no extra fillings. We get them onto the stove just after removing the chili-cheese tamales.

More than three hours after we started comes the best part — eating. I’m not disappointed. The steamy, savory version I unwrap is perfectly cooked (Montes had checked on them a few times for doneness, telling me she can tell just by looking at them), with oozy cheese and just a bit of bite from the pepper. The flavorful masa is imprinted with ridges from the husk and flecked with bits of the corn. Although Montes wishes she’d added a touch more salt and chopped up the Anaheims, I think it’s as good as it gets. I devour the entire thing in spite of the CV Delite on the horizon. 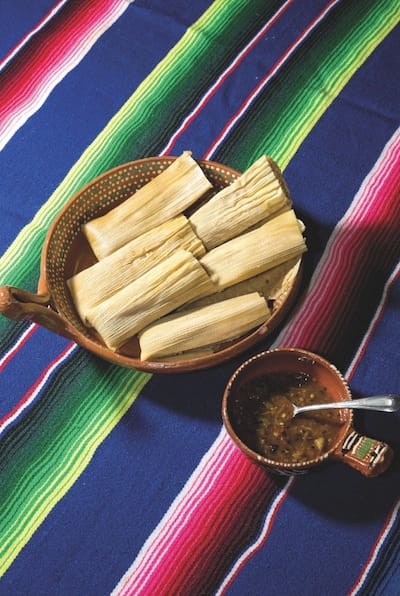 Three hours after starting, the chile-cheese tamales are ready to be savored with a piquant chile sauce.

That one lives up to its decadent description. It’s almost reminiscent of a cakey date bread, thanks to its sweet flavor and moist consistency. Montes insists that I have my next one with coffee or hot chocolate. “You dip it and it’s soooo good,” she advises.

Am I now a pro? Not by a long shot. But I like to think that I could pull my weight at a tamale-making session some day. In the meantime, Montes suggests I sample as many as I can as a sort of high-calorie homework assignment. “That way you know what you like and you’ll be able to distinguish quality, flavor, and texture.”

And although I was hoping that a local expert like Montes could direct me to a hidden gem where I could get my next fix, I’m out of luck. “I will not buy a tamale anywhere else, only from the ladies at my church,” she says. “When I taste one and I don’t like it,  I know exactly what’s wrong with it.”