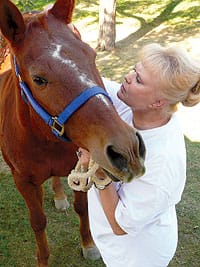 Cimaron almost died as a 2-year-old colt. Touch therapy, acupuncture, and around-the-clock care by a small team of people saved his life. Now, at the age of 21, Cimaron returns the favor as an equine therapy horse at Pegasus Riding Academy for the Handicapped in Palm Desert.

Although President and Program Director Lori Sarner calls the registered thoroughbred “the alpha male” of the Pegasus stable, she also says, “he has been the most grateful horse.”

Headed for a race-training facility in 1986, Cimaron panicked in the horse trailer and suffered lacerations, rope burns, abrasions, a concussion, and an injured spinal cord. For the next 12 days, he lay close to death, both from his injuries and infections and from his owner’s desire to put him down. But an owner of the race-training farm and a trainer wouldn’t give up on the colt. They persevered with him through the long road to recovery, much as he has persevered for the last 13 years with humans who visit Pegasus because they have a disability or are recovering from a stroke. Cimaron’s story is told in a book being released this spring titled Rescuers: Rescued Animals and the People They Help (Nodin Press) by Karin Winegar with Cathryn Andrews.

Every horse at Pegasus has a different story, but each possesses gentleness and sensitivity.

“One in 20 horses can do this,” says Stable Manager Virginia Davis, referring to the work the horses in her care perform four mornings a week walking around an arena carrying children and adults who may have involuntary movements or make involuntary noises.

“For every horse that we take in, we probably give back three or four,” Sarner says of the polo ponies, racing thoroughbreds, show horses, trail horses, and rodeo horses that have been donated to Pegasus since its founding 20 years ago.

“When a horse is donated, we take it on a one-month basis,” she continues. “We look over their experience to see if we feel the horse will be right for our program.” Then she and Davis gauge how their new guest relates to the other horses, their temperament in the stall, their health, and how well they can be shod. “Some have an injury or illness that will not affect temperament,” Sarner says. For example, one recently retired horse had asthma. Another named Snowy, donated by Sarner herself, had gone blind due to a virus. “He turned out to be the best [equine therapy] horse,” she says. One of Pegasus’ clients, a blind young man with a terminal disease, developed such a bond with Snowy that when the horse died of liver failure, he said, “Now I know I will see Snowy in heaven. He will be there waiting for me.”

Pegasus also takes in rescue horses that have been abused, but those horses are not put to work. “We give them a good life until they die or we find a proper home for them,” Sarner says, adding that Pegasus established a special fund to provide for their care. “We need extra money for that,” she adds.

Polo horses that have lost their lust for the game make good equine therapy horses. “They are used to a lot of motion on their backs and to sudden stops,” Sarner explains.

Retraining begins with three to four weeks of walking around the arena and listening to instructions. Then a fairly good rider is put on the horse to see how well he or she handles passengers. The horse also gets accustomed to noise and activity. Sarner, Davis, and Pegasus volunteers honk car horns and make other noises, get the horse near a basketball hoop and throw balls (one of the therapy games), and get them used to standing patiently at the mounting ramp.

Once trained, the horses “absolutely know what their job is,” Davis says.

Sarner wants people to understand that horses’ purpose over time — from being used to hunt, ridden in battle, as a mode of transportation, to pull carts, and recreation — has evolved to serving as healers. “This is their new work,” she says. “They have a built-in work ethic. … Because of this work ethic, horses need to work.”

And there is no greater job than that of healing.

Dinner at Pegasus Riding Academy for the Handicapped has more to do with eating than discussing the day’s work, but the equine residents are not without tales to tell (there is, after all, that romantic rivalry going on since Delta moved in). The horses have varying backgrounds, distinct personalities, and their own favorite treats.

At the end of 2005, Pegasus had nine horses, including one retired. (President and Program Director Lori Sarner says the facility really needs 14 working horses to maintain its equine therapy program.) Here are brief bios on the stable mates:

Blair’s pièce de résistance, Stable Manager Virginia Davis reports, is “anything” (he once ate half her bag of potato chips). Retired in 1992 from the Pegasus program because of arthritis, the bay thoroughbred is 22 years old. Before coming to Pegasus, Blair raced and then worked as a show hunter. Davis describes him as affectionate, but usually for an ulterior motive: “He always wants to know, ‘Do you have something for me to eat?’”

Champagne’s indulgence of choice is a cookie of any kind. The very light chestnut 22-year-old “can’t carry every person, but she’s very, very gentle — probably the sweetest-natured of any horse that you could know,” Sarner says. “She seems to understand when we have a new rider on her, and she walks very carefully.” Half quarter horse and half thoroughbred, Champagne came to Pegasus in 1986 after her owner retired her from championship polo.

Cimaron’s favorite treat is a carrot. He is the largest of the Pegasus horses, at 16.2 hands high. After a trailer accident when he was a colt, one of those who helped in his recovery gave him a loving home and used him as a pleasure trail riding horse before donating him to Pegasus. Davis wasn’t sure the seal brown thoroughbred would work out because he didn’t come from a career. But, she says, “he is the horse that settled in the fastest.”

Delta also opts for carrots when given her druthers. Davis calls her “the alpha mare” because of her spunk. “Our geldings really like her,” she says, although she adds that Cimaron is oblivious to female charms. Retired from polo after a tendon injury, Delta was a trail horse before coming to Pegasus. The liver chestnut mare, 16, and Rocket (see below) “have a thing going.” When she approaches Cimaron, Rocket gets jealous. Davis laughs as she says, “Cimaron is like, ‘Well, I didn’t know what to do anyway.’”

Lucky, meanwhile, has a thing for French fries (though Davis ensures he gets a healthier treat). Sarner says, “If he smells somebody has been to McDonald’s, his nose is going [she makes a heavy sniffing noise]. He can smell French fries all the way across the driveway.” Because the light bay 17-year-old is small (only 10 hands high), Sarner once paraded him around her drawing room when she had a party at her house for major donors. Before coming to Pegasus, the Welsh Mountain pony was a show pony for children.

Rocket has two favorite treats: carrot cake and attention. The dark chestnut, 21-year-old quarter horse came to Pegasus with his mother when he was 4. While his mother (now retired) worked as a therapy horse, Rocket worked as a trail horse until he was old enough to take on the job. “If he were a human, he’d work for The Enquirer, because he’s got to know everything,” Davis says.

Sarah gives the nod to carrots and oatmeal cookies. The light chestnut, 28-year-old thoroughbred raced in California in her youth and then was a championship show hunter on the A circuit. “She’s the sweetest, kindest mare,” Davis says. “She is so gentle that I can put her out with the ponies and she actually will tolerate their orneriness.” Because of her excellent bloodline, she was purchased as a broodmare by a prominent breeder of hunters and jumpers and then by a grand prix rider. “She’s had a lot of babies,” Sarner says.

Sassy’s favorite treat is popcorn. Sarner is quick to point out that this chestnut thoroughbred/quarter horse’s name belies her nature. “She’s sweet and even-tempered. She just does her job and never causes any trouble.” At the same time, the light chestnut is a prima donna. “She kind of struts in the arena,” Davis says. The 18-year-old’s ego, however, has taken a bit of a beating since Delta joined the stable. “She doesn’t like Delta, because Rocket took a shine to her.” Before coming to Pegasus, Sassy was a polo pony.

Smokey puts cookies at the top of her list of favorite foods, although Sarner says she loves her hay. The black half-Welsh, half-Shetland pony was a children’s trail pony before coming to Pegasus. At 16, she has what Davis calls a “typical lazy pony attitude,” and nothing unsettles her. “We call her Pokey,” Davis says.