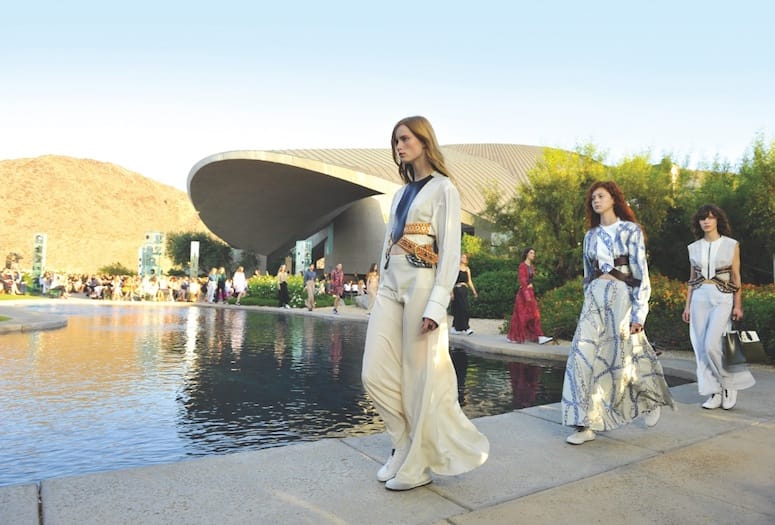 If anyone in the Greater Palm Springs tourism industry hoped for a snowball effect when Louis Vuitton debuted its 2016 women’s cruise collection in Palm Springs, they were in for an awakening.

It triggered an avalanche.

Based on clipping and online monitoring services hired by the Palm Springs Bureau of Tourism, the May 6 event at the Bob Hope house resulted in 2.4 billion media impressions internationally within the first week. Many spillover effects tally more impressive numbers: 3,800 room nights and almost 10 home rentals. Parker Palm Springs hosted an elaborate after-party and two luncheons.

“[Louis Vuitton] rented Palm Springs Art Museum for a day and had a lunch for 250 in the sculpture garden,” says Kip Serafin, owner of Locations 760 and The Kip Group, who arranged the Vuitton venues. “They spent over $3,000 in the museum store.” The following day, about 400 guests enjoyed lunch at Leonardo DiCaprio’s Dinah Shore estate.

Luke’s Catering Co. from Los Angeles sent about 60 staffers, had them coiffed pre-event at Studio M Salon and Spa, and took them to a post-event, thank-you lunch at The Tropicale Restaurant & Coral Seas Lounge in Palm Springs.

Brought to town by Louis Vuitton and offered use of its models for photo shoots with its fashions, eight of the numerous magazines invited — including international editions of Harper’s Bazaar, Marie Claire, and Elle — stuck around. “We did 16 photo shoots the following weekend,” Serafin says. “Plus a lot of the magazines extended their stay to shoot other lines.”

Clearly, anyone in the tourism industry dreams of attracting a Louis Vuitton level of VIPs. But in sheer numbers, “Coachella is still No. 1,” says tourism bureau Director Mary Jo Ginther, referring to the annual music and arts festival that transformed the desert’s retirement community reputation into a destination for young people — a place where things happen. Ask Palm Springs Hilton General Manager Aftab Dada what event brings him the most overnight guests and he’ll immediately reply in one word — “Coachella” — with no elaboration, as if nothing more need be said. The festival takes place 25 miles from the Hilton, which proves the power of the desert’s nine cities to capitalize on each other’s events and attractions.

Palm Springs hotels are building on the momentum. In its third year, Tachevah: A Palm Springs Block Party — between the two Coachella weekends and co-produced by Goldenvoice, the company behind the Coachella and Stagecoach festivals — lured 8,000 guests.

“Tachevah is still in its infancy,” Dada says. “Our goal is to build the Tachevah brand. According to Goldenvoice, there are approximately 12,000 international [Coachella] attendees and the majority of them are here for 10 to 12 days. In between [Coachella weekends], the days are dark. The goal was to give them a flavor of Palm Springs and hopefully have them come in future years to stay with us.”

This year, the Hilton became a venue for another third-year venture. Billed as a “roving pool party,” Splash House began as a personal investment by locals Tyler and Kelly McLean. The event’s inaugural success (2,000 attendees on an August weekend) caught the attention of Goldenvoice, which signed on with others as a partner. A weekend in June was added in 2014.

“Our biggest opportunity is driving demand to the summer and fall months,” says Scott White, CEO of the Greater Palm Springs CVB. “Our summer months are evolving into a separate brand.” The BNP Paribas Open tennis tournament ranks among the top draws for attendance and media exposure. More than 457,000 ticket holders filtered through the Indian Wells Tennis Garden gates in March — 25,000 more than the prior year. A George Washington University study tallied the tournament’s impact on the regional economy at almost $374,000.

Palm Desert represents the retail nucleus of the Coachella Valley, making it the best indicator of the impact of tourism on local commerce. “We estimate that the tourism industry generates over $22 million per year in revenue for the city,” says Ruth Ann Moore, economic development manager. “Of the city’s general fund revenues, approximately 37 percent are generated by sales tax and 18 percent by transient occupancy tax. Tourism’s impact on retail sales can be viewed by comparing per capita retail sales for a tourism destination such as Palm Desert and a community where the economy is not tourism-based. For example, Palm Desert brings in $314 per capita in retail sales tax, while the city of Riverside generates only $159 per resident.”

Fifteen years ago, Palm Springs’ hotels and inns filled city coffers to the tune of $14 million a year from room taxes. Over the next year, the city expects transient occupancy taxes to reach $26 million, which goes into the general fund.

“That’s a significant impact on our ability to provide services to the community,” City Manager David Ready says.

He credits this century’s near doubling of TOT (transient occupancy tax) income, in part, to the city’s hotel incentive programs. “If the [TOT] is $500,000 a year from a location and they do a remodel so now the tax is $800,000, we share 50 percent of the increment, giving them $150,000 a year. That helps pay for the renovation,” he explains. International travelers account for some of the increase in tourist dollars.

“China and Australia are growing the fastest, and our traditional markets like Canada, the United Kingdom, and Germany are becoming strong repeat customers for us,” White says. “The growth is valleywide. We have nine resort cities, and everyone is working hard to improve their attractiveness to visitors. As product is created or hotels renovate, we see a domino effect.”

With Japan’s All Nippon Airways assuming title sponsorship of the LPGA tournament in Rancho Mirage, White says, “The ANA Inspiration [tournament] is providing our destination with new opportunities to attract visitors and groups from Asia.” With a 30 percent increase in attendance this year, Palm Springs Modernism Week generated an estimated $22 million in revenue for hotels, shops, restaurants, and other local businesses. And partner events brought in more than $900,000 — $463,000 of which was raised by 23 neighborhood organizations offering tours to fund their own projects.

Although media impressions are less tangible than TOT, the effects of being on the radar are resounding. Why else would Louis Vuitton’s vice president of global events fly in from France with an assistant to search for a location that fulfilled designer Nicolas Ghesquière’s vision for, as Serafin relates it, “something like landing on the moon”? Serafin took them to the Bob Hope house, which one could mistake for a midcentury modern spaceship that landed on a flat spot of a rugged hillside.

“Last year, they did [the fashion collection debut at] a castle in Monaco,” Serafin says. “They were considering Seoul, Singapore, and Los Angeles. We were competing with other cities.”

A New York Times article on May 7 quoted Ghesquière about spying the Hope house on his first visit years ago: “I thought, ‘Wow, it’s incredible.’ It stayed, here in my dreams.”
Reporter Matthew Schneier went on to describe Ghesquière’s cruise collection as having “a modified Coachella vibe.” To assume that readers of a newspaper with a circulation exceeding 2 million would understand the reference reinforces the value of tourism to those living in the dream destination.