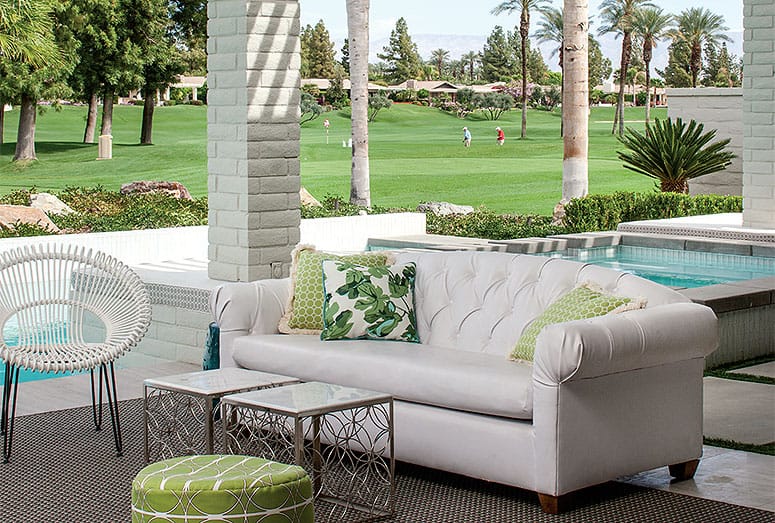 Since 2005, interior designer Christopher Kennedy has been a name on the lips of homeowners who seek an authentically California vibe that incorporates their best pieces and tells a personal story.

His new book, California Modern (Fashion & Decor Press, 2015), celebrates his firm’s 10-year anniversary with a highly visual retrospective that candidly chronicles his evolving career. Kennedy revels in pushing past the expected midcentury inspired interiors of a Palm Springs–based designer while homing in on just when and how to add a modern touch.

"My brand is nostalgic for a simpler, more gracious time," he says."When you got dressed up to leave the house and go on airplanes, when people sat down at the table and talked, not just texted. I think we have a yearning for that. It’s as much about manners and courtesy as it is about an Eames chair or a Nelson lamp."

"The idea was ‘life outside,’" Kennedy says. "These are fully upholstered furniture silhouettes and shapes that you expect to see in the living room, made appropriate for the outdoors."

California Modern is available at amazon.com or the Christopher Kennedy Inc. showroom. "When it comes to great style, there is no rulebook to follow. There is no defined set of boundaries or template to copy."

So says celebrated Newport Beach–based Barclay Butera in his fourth book, Past, Present, Inspired (Gibbs Smith, 2015). Yet those who roam mesmerized through his two model homes at Andalusia at Coral Mountain in La Quinta might beg to differ. Bring on the rules!

Master of four showrooms, Barclay and his "bright, light, and layered" formula for success in those well-received homes, along with those designed by San Diego–based Irma Shaw and local designer Cindy Fitzhenry of Fitzwell Interiors, means sales are up and more designer models are on the way. In early 2015, several new model homes by these top designers will open to the public. Meandering about these 4,184- to 5,131-square-foot estates, even those of us who shun designer templates may feel a gnawing temptation to borrow liberally. All apologies to Mr. Butera.