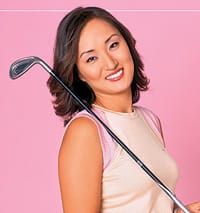 For the record, Grace Park, winner of last year’s Kraft Nabisco Championship, reports that the water surrounding the 18th hole at Mission Hills Country Club — where champions, beginning with Amy Alcott in 1988, traditionally take a post-victory swim — is cold, stinky, and somewhat slimy. “And it feels great,” Park says with a laugh. “I would love to do it again this year!”

If past performance is any indication, Park may find herself not only swimming in the great lake of Rancho Mirage, but also in a sea of accolades as Annika Sorenstam’s top competition for the title of best female golfer in the world.

It’s been a quick rise for the 26-year-old golfer. Before joining the professional ranks in 2000, Park accumulated 55 junior, college, and amateur titles, including the U.S. Amateur Championship and the 1998 NCAA Championship with Arizona State University. Along the way, Golf Week and Golf Digest named Park player of the year in 1998, and collegiate player of the year in 1999.

Raised in Korea, Park moved to the United States at age 12 and now resides in the Phoenix area. Where she does business, however, is on the greens and fairways. With six career victories — including the Kraft Nabisco, her first major — and a staggering 50 top-10 finishes in the last five years, Park has gained a reputation as a ferocious competitor with a swing as natural and as fluid as any in the game today.

But the moment she truly came into her own — both in the eyes of the fans and, Park admits, herself — occurred last year as she faced a 6-foot birdie putt to win the Kraft Nabisco. She had battled Aree Song for much of the last round, and when Song holed a miraculous 30-foot eagle, the pressure was on Park.

Make the shot, win the title.

Miss the shot, and face the hard-charging Song in a playoff.

To observers around the world, Park looked calm and collected, a picture of elegance poised over a little white ball; and when it rounded into the hole and the gallery exploded, the ending seemed foretold.

Not so to Park.

“My palms were sweating. I didn’t know if I could take back the putter. But if it weren’t for that putt, I wouldn’t be the same player I am today. I wouldn’t have had the year I had. But because I’ve played in so many tournaments, at each level, and have dealt with similar situations, at that point I didn’t care if it was a major championship or a local junior event, I just wanted to make that putt. I was nervous, but I believed in myself. And I enjoy the opportunity to be in that moment.”

Enjoying the moment hasn’t always been easy for Park. Despite finishing No. 2 in the world in 2004 (Sorenstam was No. 1), Park says that only now has she begun to focus on taking real pleasure from the game itself. “For the first few years, it was job, job, job. I have to practice. I have to play. I have to play this tournament and that tournament. Instead of making my own decisions, I just went along with the tour. I didn’t have my own goals; I didn’t make my own decisions. That exhausted me. I finally turned it around and realized I should be having fun. I should enjoy this. I don’t play for fun. I don’t just go out there and play golf in my free time. Competition drives me. That’s what I enjoy doing. That’s fun. It’s pressure, but it’s fun pressure.”

At some point, perhaps when her pro career ends, Park envisions a time when she can go out on the course with friends and play without the need to compete. Meanwhile, she has her eyes fixed on No. 1, and that means accomplishing what no one has done since Park’s rookie year: dethrone Sorenstam. “I accept that Annika is the No. 1 women’s player in the world. I admire her accomplishments and her skill, and I want to challenge her this year and for years to come,” Park says.

Unlike the men’s game, where rivalries have been the grist for debate since the very beginning, and now seem to waver from tournament to tournament (with at least one constant to all of them — Tiger vs. Vijay, Tiger vs. Ernie, Tiger vs. Phil…), the LPGA hasn’t always fostered that dimension. But Park wouldn’t mind seeing it play out at least one way. “If it were Annika
versus Grace, that would be great,” Park says. “I always look forward to playing the best, because it makes me work harder. There are times when I play in a weak field that I just get too loose. Not that I don’t want to win, but that I get lazy with myself, I lose focus. When there are top-10 players in the field, including Annika, I know that I have to play that much better.”

There’s not much room for improvement in Park’s game. She led the tour in scoring, averaging 69.99 per round,
finished fourth in driving distance at 267 yards per drive, and finished 2004 with a string of stirring performances, highlighted by her second victory of the year — a masterful, five-stroke trouncing of the field at the CJ Nine Bridges Classic in Korea. Combined with 12 top-three finishes and her Kraft Nabisco major, momentum heading into 2005 seems to be in Park’s favor.

But if it all ended tomorrow — and there’s no reason to believe it will, what with that lake beckoning — Park would be content with how far she’s come, what she’s accomplished, and with her legacy. “As much as I love this game,” she says, “I can’t wait for the time when I go back to being a normal person, a normal woman, starting a family, taking care of my kids and husband, just leading a normal life. There are plenty of other things in life I want to accomplish outside of golf. Ultimately, I want to reach happiness.”