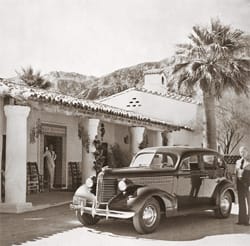 Oh, if the old adobe walls of La Quinta Resort & Club could talk. Imagine the amazing stories they would tell. Perhaps an account of what Prohibition was really like, when guests in the spacious Santa Rosa Lounge discreetly mixed the contents of silver flasks with freshly squeezed orange juice, inadvertently creating a cocktail called the Orange Blossom. Or the details of a bawdy joke shared poolside by screen idols Errol Flynn and Clark Cable during the resort’s early Hollywood heydays. Or even a snippet of conversation between famously reclusive Greta Garbo and her on-screen/off-screen leading man, John Gilbert, who often vacationed there together.

If any resort could be called charismatic, it’s La Quinta Resort & Club. Whether as a celebrity getaway, dream honeymoon or vacation spot, or corporate meeting destination, the pristine resort with original 1926 Spanish-style casitas and 45 acres of lush, citrus tree-covered grounds continues to draw guests to its idyllic setting.

“There is a magic here — an intangible that’s really hard to put your finger on, says Garret Kriske, director of operations, adding that the resort’s lore and history contribute greatly to its allure. Its timeless appeal binds generations.

An elderly gentleman stopped by the front desk with a young boy and told Kriske that he had visited the hotel with his grandfather 50 years ago and had brought his own grandson to the resort for a visit. “That stay was meaningful to him — more than just a hotel stay,” Kriske says.

Thus began the hotel’s reign as a pampering refuge for film stars and business tycoons, among them Bette Davis, William Powell, Joan Crawford, Joel McCrea, Marlene Dietrich, Charles Boyer, Katherine Hepburn, Robert Montgomery, Ginger Rogers (who wed French actor Jacques Bergerac at the hotel in 1953), Richard Widmark, the DuPonts, and the Vanderbilts. The hotel was a favorite retreat for noted film director Frank Capra, who wrote many of his award-winning classics — including the 1936 Mr. Deeds Goes to Town — from the sanctum of his private casita.

Diversions waned with the advent of World War II and rationing; in 1942, the hotel shuttered its doors for the duration of the war and the United States Army appropriated the property. According to a written historical account, members of Gen. George Patton’s staff reportedly used some of the La Quinta Hotel facilities.

Celebrities and sports stars still are drawn to the resort’s low-key atmosphere, hacienda-inspired accommodations, and first-rate service. Madonna, Britney Spears, Diane Keaton, Oprah Winfrey, Andre Agassi, and Kevin Costner are only a handful of the superstars who frequent the premises. “Here they’re not bombarded with autograph seekers,” says concierge Buck Edwards, who conducts history tours of the resort. “It’s just a place that’s always had a history of that relaxed privacy and atmosphere.”

On occasion, less-secret celebrity encounters happen — such as the time two teens wanted to play basketball on the resort court and half the court was already occupied by Michael Jordan and Joe Montana. The teens were “flabbergasted” when Jordan and Montana invited them to play two-on-two, Edwards says. “They even waited until the kids got a camera so they could take pictures with them.”

After the war ended, the hotel re-bounded to become a prime vacation retreat. From the 1940s through the 1970s, the hotel’s ownership passed through the hands of Chicagoans John Balaban and Leonard Ettleson, as well as Landmark Land Co. Each proprietor shaped the hotel’s growth, yet strived to retain its personality. Balaban’s connections re-newed Hollywood interest in the property; Ettleson and a group of his associates revitalized the hotel’s golf scene, developing La Quinta Country Club; and Ernie Vossler and Joe Walser Jr. of Landmark Land Co. were instrumental in creating the La Quinta Hotel Golf Club, comprising three 18-hole championship courses.

Throughout the 1980s and beyond, the resort added rooms and suites, honoring Morgan’s tradition of naming casitas for saints. Other expansions included the 17,000-square-foot Salôn de Fiesta Ballroom, two restaurants, an outdoor plaza lined with retail boutiques, and a 23,000-square-foot spa.

In 2005, the resort introduced Music Suites, featuring preloaded iPods and docking stations, and recently invested $1.5 million in new beds and bedding for all the resort casitas and suites. The latest upgrades include new carpeting, as well as 42-inch and 32-inch, flat-panel, high-definition televisions in the guest rooms.

One stop on the resort history tour is a confluence of rooms built in 1926, 1988, and 2000. “It’s great to show people that there is little difference between these three areas,” Kriske says. “A great amount of time, effort, and thought is put into making sure that we maintain a sense of place.”

1934
Movie director Frank Capra and co-writer Robert Riskin pen It Happened One Night at the hotel. The screwball romantic comedy wins five Oscars in all of its nominated categories, including Best Picture. Thereafter, Capra returned frequently to his “Shangri-La for scriptwriting.” Other Capra classics include Mr. Deeds Goes to Town (1936), Lost Horizon (1937), and You Can’t Take It With You (1938). Capra and his wife, Lucille, lived at the resort from 1981 to 1987 in rooms 136, 137, and 138.

1942-1945
Gas and tire rationing contribute to the hotel’s closure in the spring of 1942 for the duration of World War II. Gen. George Patton and his troops are housed at the resort and train nearby.

1945
Chicago hotelier Arnold S. Kirkeby purchases the hotel, selling it three months later to John Balaban. After the war, the Hollywood elite return, and a private airstrip is installed on the grounds.

Late 1950s
Balaban sells the hotel to Chicago attorney Leonard Ettleson, who plays a pivotal role in the golf course expansion. The entire hotel is painted pink, because Ettleson’s wife likes the color.

1957
Ettleson and his associates develop La Quinta Country Club golf course. Designed by Frank and Lawrence Hughes, the course is a hit with golfers and celebrities, including President Dwight D. Eisenhower.

1972
Ettleson contracts with golf professionals Ernie Vossler and Joe Walser Jr. of Landmark Land Co. to advise him on the creation of a golf course behind the hotel.

1982
The hotel’s namesake, the City of La Quinta, is incorporated. It is the second American city to be named after a resort (Beverly Hills was the first).

1988
The hotel begins a $45 million expansion that results in a total of 640 casitas, a 17,000-square-foot ballroom, two new restaurants (Morgan’s and Adobe Grill), and a central plaza.

2006
Now celebrating its 80th birthday, the legendary La Quinta Resort & Club is considered one of the top resorts in the world.