A San Diego couple took cues from the original floor plan to piece the 1965 house back together again.
PHOTOGRAPHS BY DAVID BLANK

The South Palm Springs development of Green Fairway Estates met a tragic end. Before the Alexander Construction Company could finish the small community of homes designed by Donald Wexler, the Alexander family died in a plane crash that ended their productive 10-year streak of midcentury home building. Only a handful of the original fairway homes had been built before the family was gone.

One with a set-back center entry fell into its own ongoing tragedy. It was turned into a hackneyed assisted living home where patients eventually lived in squalor while the owner succumbed to a gambling problem.

Judy Christensen and her husband, Steve Powell, found the “dump” of a home on Tahquitz Creek Golf Course while looking for a vacation pad where they could spend weekends away from San Diego. Little about it resembled the vacation-ready homes of the Alexanders’ promotional brochure. But the bank-foreclosed price was right, as was the neighborhood, a mix of the Alexanders’ Green Fairway designs from 1965 and later variations that grabbed embellishments from Hawaiian and Southwest adobe styles.

The home was original in story and in shell, but little more. “There was nothing vintage left in this house. Nothing,” laments Christensen. So they started over, taking cues from the original floor plan to piece 1965 back together again. Walnut floors and poured terrazzo complemented Wexler’s layout.

The renovation stretched across years of working weekends. “It was crazy,” Christensen recalls. “And we lived there through it once all of the new windows were in — just us and crickets!”

A detail the couple coveted from the original plan was a custom free-floating conical fireplace that once hung from the ceiling. A gas-fueled fire filled the bowl below. A number of the Green Fairway Estates homes had featured the fireplaces; few remain intact.

Christensen, a graphic artist by trade, didn’t think twice about designing one. “I have a girlfriend who does lighting design and has a metal fabricator,” she says. “The hood and top part were fabricated in Mexico, and the bowl was spun in L.A.”

Powell crawled through the attic to connect the monstrous hood to the chimney. “A gas line was already there on the wall,” he explains. “We just had to run the pipe, then add the raised hearth.” The first time they lit it, Powell “was afraid we were going to burn the house down,” he admits. But it fired right up as if it had been there since the 1960s. In the summer, the mod fireplace is just for looks, but on a cold winter morning, it heats the room quickly and efficiently. Christensen has since made several others for friends.

In researching the home’s era after they purchased it nine years ago, Christensen became so enamored of midcentury everything that it spawned her business: She is co-owner of Mix Modern vintage boutique on Perez Road in Cathedral City. Occasionally, a special piece will come into the shop that she can’t resist swapping out for something at home. Mostly, though, she sticks with their original design. 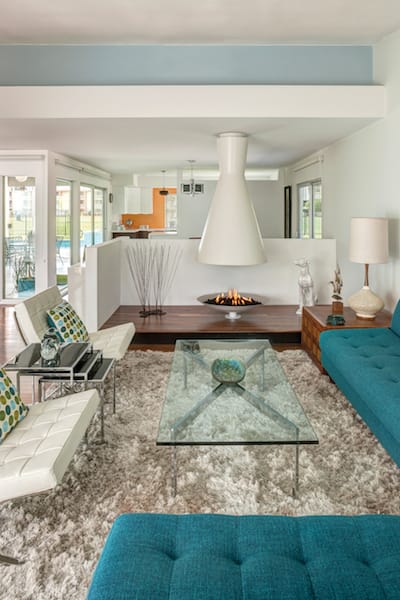 The conical fireplace Judy Christensen had fabricated to drop down between the dining room and living room resembles the home’s original. The couple hooked it to an existing gas line and added the wood platform hearth.

“The biggest takeaway for me was finding this home and saving it,” she says. “We did so much of the work ourselves, made the best of it, and lived here when it was almost unlivable. It was our labor of love.”