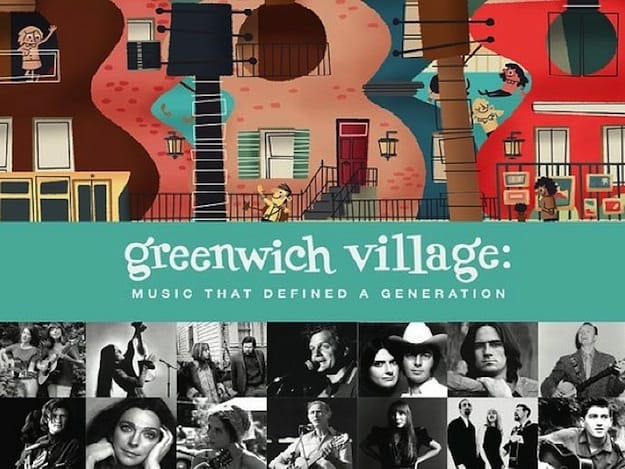 And they did it starting in Greenwich Village, a neighborhood of New York that became the catalyst for political, social, cultural and artistic movements.

In “Greenwich Village: Music That Defined a Generation”, the documentary focuses on the 1960s and early 1970s mixing interviews with archival footage and new live performances from the likes of Pete Seeger, Judy Collins, Don McLean, Arlo Guthrie, and Kris Kristofferson among many more.

During the turbulent 1960s, the music coming out of Greenwich Village not only banded a generation together, but put into the words the distrust with government and the anti-war movement. While the music and the word struck a chord with a growing audience, not everyone was on board.

In April of 1961, more than 500 musicians gathered in Greenwich Village’s Washington Square to sing folk songs to promote peace and harmony. The result was what would become a symbol of these tumultuous times, police riot squads attacking singers and civilians with billy clubs, arrests and lines drawn in the sand.

The clash became known as the Washington Square Folk Riot and put down in the history books as the first ‘freedom of speech’ revolt, and only strengthened the drawing power of Greenwich Village as the place of change for a generation.

The film directed by Laura Archibald weaves the voice of Susan Sarandon, who reads excerpts from “A Freewheelin’ Time: A Memoir of Greenwich Village” published in 2008 by Bob Dylan’s one-time girlfriend, Suze Rotolo, who was 17 when she met the then 20-year-old Dylan.

The Desert Film Society presents a one-time screening of “Greenwich Village: Music That Defined a Generation” at 9:30 a.m. June 15 at the Camelot Theatres in Palm Springs. Doors open at 9 a.m. with film introduction at 9:20 a.m. Admission is $15 or free to Desert Film Society members. A discussion follows the film.