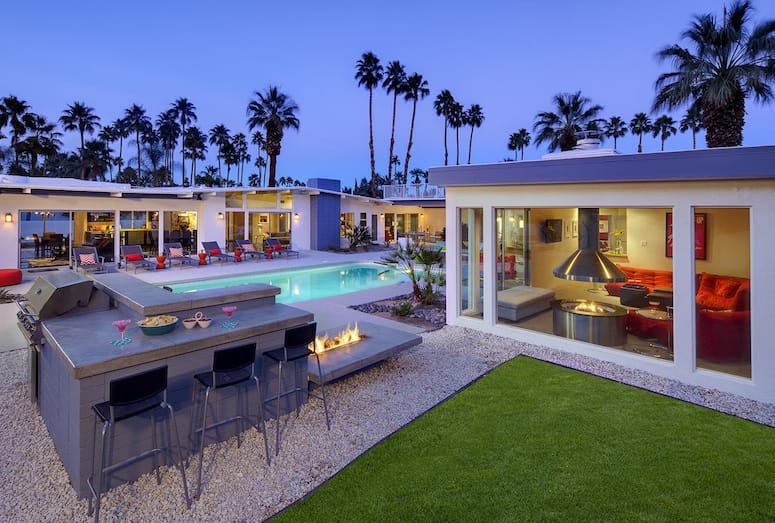 You may not know his name, but you’ve been seeing examples of designer Greg Wolfson’s work and diverse design style for years.

Wolfson was a television set decorator for 15 years—one of his first shows was The Fresh Prince of Bel-Air  — and he also worked on a variety of other sitcoms, soap operas at CBS Television, and The Montel Williams Show, among others.

But when he and his husband’s third child arrived in 1999, Wolfson found it was getting to be too much to work full time in entertainment and raise the kids, so he struck out on his own and founded Greg Wolfson Interiors.

“The first jobs I got were from people who wanted second homes done that look like a movie or TV set,” he says. “Basically very clean, perfect, almost as if they were living someone else’s life.”

Wolfson started out renovating homes in Palm Springs and Puerto Vallarta and has focused much of his design energy on turnkey, high-end vacation rental properties.

The Vista Las Palmas home featured here was built in 1961 and is comprised of two boomerang-shaped buildings — a 3,000-square-foot main house and a 2,200-square-foot casita — that face each other across a pool.

“The client had a few of the posters so I went with that theme and tried to keep it really bright and fun,” he says. “And I do think in vignettes a bit because of having a background in television where a close-up or two-shot was the money maker.”

Amazingly, all of the work was completed in just six weeks — in fact, Wolfson’s specialty is doing projects in six weeks from start to finish.

The house had a very oddly modified storage closet in the entry that faced into the living room after Wolfson removed a wall. “So we ended up with this dead space that wasn’t really part of any room,” he says. As luck would have it, he found this round sofa that fit perfectly. “People can lay there and look all the way out to the pool, so it’s a nice transition between the living room and dining room and actually feels like its own space.” Wolfson found the steer’s head in a furniture store. “It looks like it could have been in the desert, but it’s silver.” The layout of the kitchen was very enclosed, so Wolfson removed two walls. “The cabinets were fine, they were probably updated when the previous owners did the flooring,” he says, “But the countertops were very dated. I’ve always wanted to use this Apple Martini Caesarstone. I think by bringing it in we not only updated the cabinets, but we introduced color in a way that was a little unexpected. It also sets off all the stainless appliances and the accessories in the kitchen in a very nice way, and marries the colors of the grass and bushes from outside to the inside — so it kind of brings an organic color into the house.” All of the rooms in the casita are accessible from the outside. “I found the sofa on Overstock.com and it’s very heavy-duty memory foam,” says Wolfson. “You can move the pieces around, so it ended up being a very flexible whole room piece that’s super comfortable and it gives that flavor of kick-back Palm Springs. Using the midcentury style of the house as inspiration, Wolfson put up a privacy wall outside this guest room. “The patio offers this really small bedroom something different,” he says. The shiny, black granite floors were in the house and Wolfson and his client decided not to change them. “But we turned it around and made them work for us as a highly-reflective surface,” he notes. “We decided to go with a palette of grays and off-grays all the way through the house, so there’s no white anywhere. It felt like it added a notch, something a little different than typical Palm Springs modern.” The master bedroom faces the pool and has its own little private area outside. The client loves orange so Wolfson used it throughout the house. “I tried to restrain it and not let it take over,” he says. “I like grounding rooms, especially if we have a bright color, with gray and even a color that has gray in it. The blue has a lot of gray in it. I felt it warmed up the orange and made it maybe a little more special in that room.” A large cabana was added — perfect for relaxing and entertaining. Wolfson created a new outdoor space with a grill, dining counter, and fire pit where there had just been grass. “I felt it was a completely unusable area the way it had been set up and I like to say that I brought the conversation across the pool,” he notes. “And I like that it looks into the big TV room in the casita with the big orange couch. It really has grounded a whole new area of fun.”