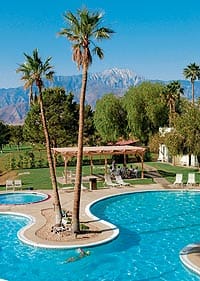 What began as a hideaway retreat for Hollywood screen legends in the 1930s and 1940s has become the getaway of choice for an ever-increasing number (we’re talking in the millions annually) of people seeking sun and fun in a naturally beautiful setting.

After all, you can’t keep a place this great a secret. The Palm Springs desert resort cities have responded by cultivating destination resorts, lush green golf courses (120 of them), world-class spas, one-of-a-kind dining venues (as well as nationally recognized restaurants), a plethora of shops selling items to enhance your personal style, and tourist attractions to write home about.

Of course, Mother Nature deserves some credit here as well. The light in the French countryside may be noted for inspiring painters since the days of Cézanne, but more and more artists (painters, writers, and musicians) find inspiration in the pinks, lavenders, and golds reflected on the hillsides as the sun moves across the sky. Horizons greet the eye in all directions. The sun shines practically every day of the year, and the temperature rarely dips below the 40s even on winter evenings. In fact, the year-round opportunity to lounge poolside, dine alfresco, and stroll leisurely down a sidewalk is one of the qualities that make the area so enticing.

Because the desert is so relaxing, it is an ideal place to conduct corporate meetings, impress clients, reward employees, and combine business with pleasure. Each desert city, from Desert Hot Springs in the northwestern end of the Coachella Valley to La Quinta in the southeastern end (with Palm Springs, Cathedral City, Rancho Mirage, Palm Desert, Indian Wells, and Indio in between) maintains its own distinct identity while blending with the desert lifestyle.

When a region hosts as many visitors as the desert resort cities do, it stands to reason there should be plenty of accommodations ranging in style, size, price, services, and amenities. That’s what our resort cities offer  — because no one wants to leave after just one day.

Before the month is up, a group of about 5,000 people will be among the first to entirely use the new and improved Palm Springs Convention Center (other groups have used portions of the interior during 1 1/2 years of expansion construction).

“New and improved” and “expansion” hardly touch upon what has taken place on the edge of downtown Palm Springs. “Turnaround” certainly befits the project, since the front and back of the center were swapped so the glass-walled entrance now faces the distinctive ridgeline of the San Jacinto Mountains.

Those who’ve had sneak peaks have offered praise.

“They’re just amazed at the transformation,” says Jim Dunn, general manager of the convention center, “because it is a transformation, not just an expansion.”

When the International Conference of Shopping Centers Western Region returns to the venue for its annual gathering (Sept. 27-29), more than 200 exhibitors will find 112,000 square feet of exhibit hall and ballroom space, an 18,000-square-foot lobby, and other additions that approximately double the center’s capacity.

They were actually very, very tight the last two years, so they are thrilled,” says Dunn, who himself was surprised how well Fentress Bradburn Architects of Denver created an environment sure to impress even the most well-traveled conventioneer.

“It sounds good,” he says of the plans. “In reality, it’s so much better.” A month before construction was due to be completed, Dunn commented on “interesting things the architect did that we are just now picking up on.”

Design elements echo the natural drama of the mountain range mere blocks from the center. Undulating lines and flagstone-covered columns of varying height and mass replace the formerly boxy, plain-Jane wrapper. Squares of copper on a wavy band along the north and west roofline were mounted in a diamond pattern to mimic the look of a palm tree that has been trimmed of its fronds.

Inside, ceilings and walls abandon straight planes for curves, angles, and relief. Ceiling squares in the ballroom provide a sense of depth — like clouds floating in the sky —that Dunn describes as “less uniform and manufactured looking.”

Since they haven’t seen the results yet, meeting planners have not been drawn by these expressive details. Instead, they’re drawn by the center’s enlarged size.

“The fall is absolutely jammed,” Dunn says of scheduled conventions and meetings. “It will probably be our biggest fall on record.” Next year also is filling in. “There’s a lot in there,” Dunn continues. “Like the whole month of March is just sitting there with group after group.” He already started booking 2007  even before the unveiling of the new and improved package.

Find a need and fill it

Almost 3,500 hotel rooms and casitas are in the planning stages — and that takes into account only mid- to large-size resorts — throughout the Coachella Valley. And over the past few years, most of the major resorts in existence have spent millions in renovations, expansions, and the additions of spas and other amenities. Clearly, the hospitality industry recognizes the need to respond to growing demand.

If the convention center draws the national and international crowds expected, those people are going to want a quick and convenient method for getting here. Just in time for the rush, Palm Springs International Airport has embarked on an expansion of its own, including additional security screening lanes, a new regional jet terminal, and enhanced waiting amenities, as well as more flights to and from more cities.

Perhaps the best indication that the desert resorts give people what they want is the vast number of visitors and corporate/organizational groups who return time and time again.