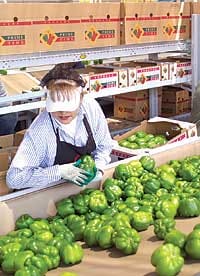 Grocery shoppers got the jump on summertime when plump, bright-red strawberries joined melons in produce aisles last winter. The traditionally hot-weather fruit, labeled “California,” came not from the state’s strawberry capital (Watsonville), but rather from the east end of our desert valley.

“About three years ago, we grew five acres of strawberries as a test,” says Mike Aiton, senior vice president of Sun World International, which farms about 5,000 acres in the valley. “The idea is to hit the market in the winter for Thanksgiving and Christmas and January and February when there aren’t a lot of domestic strawberries around. Based on the success we had with the trial, we expanded it to 100 acres two years ago and 200 acres last year.”

Watsonville growers have formed alliances with local growers and landowners to offer a year-round product. “There are probably going to be 1,000 acres of strawberries in the Coachella Valley next year,” Aiton predicts. “What has changed more than anything is the varieties that can grow here and still taste good.” In fact, he adds, the color, flavor, and size rival that of berries from the best tried-and-true locales.

Recurrent selection — a breeding method aimed at increasing the frequency of favorable genes through repeated cycles of selection and crossing — is part of the reason a sensitive crop like strawberries now can be enjoyed year-round. Technological advances in water management and substantial reductions in the amount of chemicals applied to crops also benefit the agricultural industry — and, ultimately, the consumer. “Farms are getting a lot smarter about how they manage those monies and resources,” Aiton says. Strawberries have been tested in the desert for probably 20 years, but through techn-ology and varietal development, growers have honed the best practices for a high-quality yield.

“There’s a whole realm of things that have been going on here in the last couple of years,” says Mark Nickerson, managing partner of Prime Time International — which farms about 2,600 acres in the valley. “The first thing is in the plant genetics, the new varieties that are being developed.” The new varieties, he says, not only produce a better-quality fruit or vegetable, but also are more specifically designed for geographic areas. Prime Time, the country’s largest shipper of colored peppers, enjoys an extended hothouse season and better yield thanks to new pepper varieties.

Nickerson offers numerous examples of progress in agriculture. More user- and environmentally friendly insecticides allow growers to target particular pests without disrupting beneficial insects. A new wave of micro-organisms have shown success in combating soil diseases and shown promise in replacing methyl bromide, a longstanding soil fumigant the U.S. Environmental Protection Agency has ruled will no longer be available as of 2005.

The use of global positioning satellite technology has become more widespread, guiding tractors and preventing an overlap of spraying fields. GPS-equipped harvesters allow growers to detect yields in specific locations and treat one particular spot differently than another. Farming operations can sign up with satellite services to get periodic pictures of their field to determine where crops might be weak. “The technology is so advanced now that it can zoom in on a 40-acre field and determine where there is a problem with water or fertilizer,” Nickerson says. It allows diagnoses much further in advance. “Before anything serious can happen, you can attend to it,” he says. “It’s like going for a checkup at the doctor’s office.”

Technology is even transforming historically older crops. Albert P. Keck, president of Hadley Date Gardens, headquartered in Thermal, says the date industry has been making strides in fertilizer, soil, and water management. But he singles out one major breakthrough: controlling the tiny-but-mighty mites that colonize on date bunches.

“They envelop a bunch of fruit in a web and start to feed off the surface of the fruit,” he explains. For years, date farmers have been using sulfur to battle the infestation, but sulfur is very unpleasant to use, Keck says. Not only does it smell like rotten eggs, but it also burns farm workers’ eyes. It also burns the fruit.

Worse yet, he says, “The mites were developing a resistance, which was unheard of in the past.” Unfortunately, beneficial organisms didn’t. Consequently, Keck says, “We weren’t getting good control.” The solution became part of the problem.

The University of California at Riverside, however, has been active in researching pest control and came up with a chemical that kills mites while remaining benign on nontargeted organisms.

“These new chemicals are pretty high technology in the sense they are very focused, highly specific, against pests,” Keck says.

Savey, as the chemical du jour is called, doesn’t damage the fruit, isn’t toxic to mammals, is pest specific, and is more potent than sulfur. Instead of using hundreds of pounds of sulfur per acre, date farmers can use 3 ounces per acre of the active Savey ingredient to do the job.

Overall yield has not been as affected as much as the quality of the yield, Keck says, and quality translates into greater profits for date farmers. “It is just a wonderful achievement for the industry,” he says.

While technology marches on, it is worth nothing that the date industry retains a man-over-machine advantage in cultivation. “As far as the cultivation of dates goes, we have not implemented any major new technologies in the last 40 years or so,” Keck says. Despite testing towers and booms, the labor-intensive harvesting of dates is best left in the hands of man and ladder. “The ladder man is still the backbone,” he says. “They are just more efficient.”

In dates and other crops, Keck says, the transition to drip irrigation — supported by U.S. Department of Agriculture grants — represents another agricultural advance. “The Coachella Valley,” he says, “is an example to the world of efficiency with regard to water use.”

Meanwhile, urban development more than creeps toward the fields in the east end of the valley. Though he acknowledges the challenge of operating around development, Keck recognizes a positive aspect to the movement: “It improves the property values of these farms.”

“The urban-farm interface will be an issue we will be dealing with for the foreseeable future,” he says. “But agriculture in California has always had to deal with that issue.”

While they reap the benefits of technological advances, farmers have to keep up with not only what’s new on the scientific front, but also in the political realm. Farming may have its roots in the Old World, but it is guided these days by New World regulations.

Steve Pastor, executive director of the Riverside County Farm Bureau, reports on a new, voluntary PM10 fugitive-dust control program the bureau worked out with the Air Quality Management District. AQMD, he says, has been cracking down on PM10 not only from construction sites, but also from agricultural operations.

“If a farmer goes into the program, they have a choice of ways to eliminate or reduce dust off of their land. If there is dust blowing and the farmer has the program in effect, he or she will not be fined by the AQMD,” Pastor explains. The program offers recommended measures to be taken. When farmers sign up, they check off as many as they have the capability of performing. If they do what they say they will do, they are relieved from any possible penalty.

Last spring, the California Senate passed a bill that removes agriculture from the exemption it has enjoyed for 20 years to California air quality standards. “AQMD [says] nonmobile units, such as booster pumps and water pumps, must be regulated and have a fee attached based on emissions,” Pastor says, adding that hearings on fee standards will be held the latter part of this year. “We will be speaking on behalf of agriculture to keep the fees at the lowest possible level,” he says.

The farm bureau — a nonprofit organization of farmers and ranchers in Riverside County — wants to make sure growers face no adverse effects from the plan. “We are monitoring to make sure agriculture is well protected in the Coachella Valley,” Pastor says.