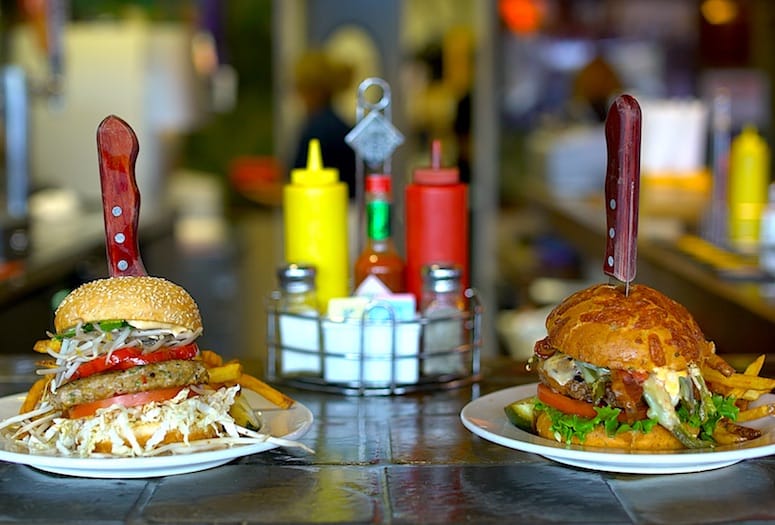 The owners of the tasty local spots he visited have filled us in on some of the details. Among the takeaways:

• The show’s team of researchers carefully scouts the restaurants ahead of time. Restaurants need to send in their menu items (even daily specials) for Fieri to review. He personally chooses the dishes he wants to feature on the show; the restaurants have no say.

• Fieri is on-site for about three hours. The crew shuts down the restaurant for two days for pre-production.

VIDEO: Grill-A-Burger shares how they prepare two of Guy Fieri's favorite burgers from his visit to Palm Desert. (Video by Steven Salisbury).

We asked the restaurant owners to tell us more about what it was like to have Fieri in their kitchens. After all, hungry minds want to know.

This popular deli favored by Valley locals didn’t need Fieri’s golden touch, but the sandwiches at Sherman’s are made for television. The Diners, Drive-Ins & Dives producers contacted GM Gordon Poster, who was more than happy to send over the menu full of creations that would make any Fieri fan travel miles just to taste the fall-off-the-bone brisket. 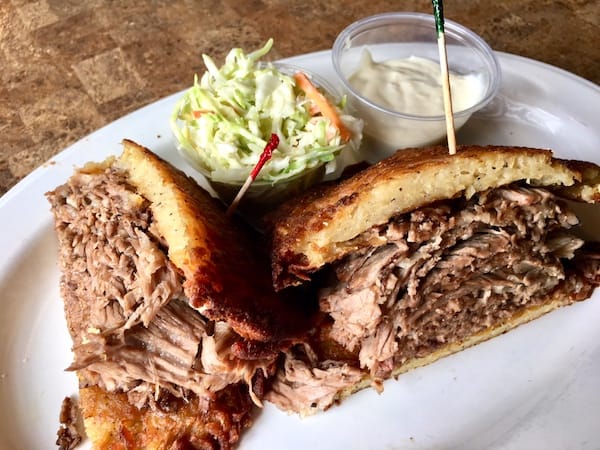 The Beef & Latkes sandwich is a unique twist on the brisket sandwich.

“People come here specifically when they are on a trip,” says Poster. “People say, ‘Hey, you’re the guy that was on the show with Guy.’ I’ve had my picture taken with his silhouette [which sits in the restaurant] many times. We are now part of the Triple D fraternity.”

Viewers of the show can see why Fieri chose Sherman’s. “I think we serve a version of old classic items in a unique way,” says Poster.

Take that Beef ’n Latkes: The brisket is piled high between crisp potato pancakes and garnished with a creamy kick of horseradish sauce.

Sherman’s was shut down for two days to set up the cameras and video, while the featured dishes were made over and over, shot from several angles. Fieri spent a few hours in the kitchen with the chef and then out in the diner conversing with guests.

“We had a lot of fun,” says Poster. “He’s very professional. He knows what he’s talking about. He lets the chef do what they’re best at. What you see on TV is what you get — he’s not a phony.”

After the show aired, the turkey pastrami became the most popular sandwich on the menu, catapulting the number of turkey breasts prepared each week from 10 to 30.

“Build it and they will come.” Yes, this is a line from Field of Dreams, but it was also the inner voice of Zobo & Meester’s owner Bart Groendycke, who built his Cathedral City fast-casual restaurant with Diners, Drive-ins & Dives in mind.

“My inspiration for this restaurant was because of the show. I wanted to make the unique foods you can’t get at the restaurants,” says Groendycke. “I told Guy when he was here, I studied up by watching Triple D, and then I opened up a restaurant.” 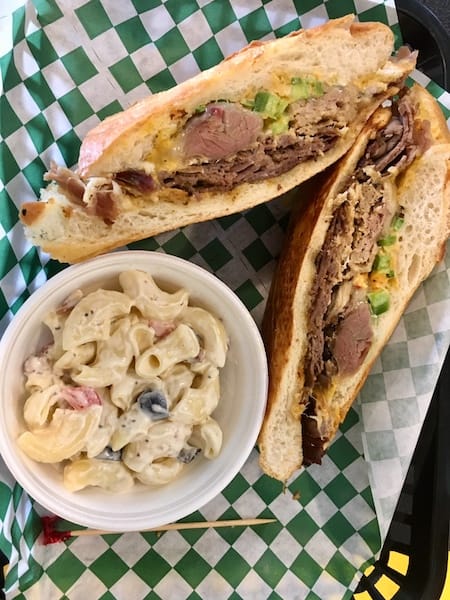 Zobo & Meester’s Flame Thrower sandwich was inspired by the food Guy Fieri features on his show.

“Guy looks at the menu and decides what he wants to eat,” says Groendycke. “Usually BBQ sandwiches have one meat on them, and ours has a blend. They were both great choices for the show.”

Having Fieri and a camera crew in the kitchen was a trip. “It was cool,” recalls Groendycke. “I’m just trying to forget about the cameras and concerned about saying the right things, but it was a lot of fun. He even spent time chatting in the kitchen with my girls, which was a real treat for them.” 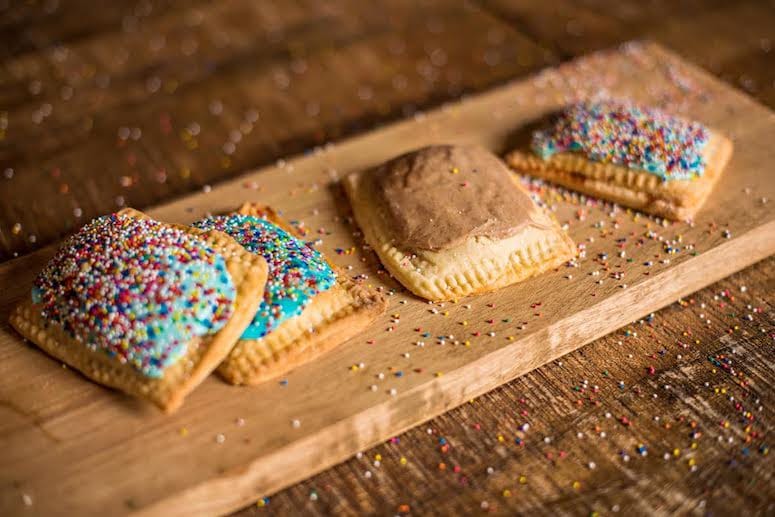 Wilma & Frieda's breakfast tarts are a much healthier version of the ones we grew up eating as kids.

Wilma & Frieda is not the first place to come to mind when you think of Diners, Drive-Ins & Dives. Located in the upscale El Paseo shopping mall, it’s not exactly a diner that Fieri can roll up to in his red Camaro. However, Wilma & Frieda has the down-home cooking, creative menu with fun flavors, and hearty portions that are popular on Triple D.

Fieri chose an outside-the-box dish with the Meyer Lemon Blueberry Breakfast Tart, a gourmet and healthier version of those Pop-Tarts we all devoured as kids. He also featured the recipe for short rib, which the restaurant uses in eggs benedict and a melt sandwich. After the meat is cooked and the fat removed, the juices and mirapoix are blended together and reintroduced into the meat before grilling; red wine in the broth adds extra love.

Owner Kelly McFall was impressed by how seamless the production was. “His team was so amazing to me,” she recalls. “Almost all of the people on his team have been with the show since it started over 10 years ago, and they are so professional and know exactly the best camera shot. You film for two to three days, for what comes to seven minutes of actual footage, so they know how to direct this so the segment flows seamlessly.”

The staff was excited to participate. “He knows how to get the best out of the people he is talking to,” says McFall. “He puts you at ease so quickly that you don’t even realize you are on camera.”

Since the show aired, Wilma & Frieda has seen a healthy influx of new customers from all over the U.S. “Little kids are in awe when they walk in and see my brother and I, because they have seen us before on the show,” says McFall.

No, this is not fake news: Fieri featured Frankinbun’s vegan hot dog on his show.

“He asked us about our unique sausages, and I mentioned this one, and he went for it,” says Frankinbun CEO Tristan Gittens. “I was most impressed with his decision. I know that this isn’t his main viewer, so he was going out on a limb for us.” 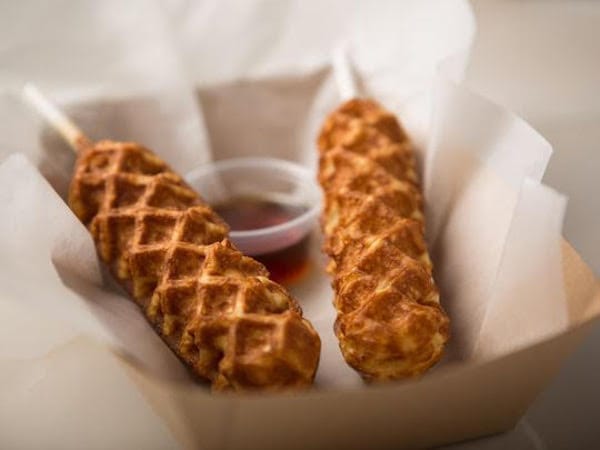 The Chicken & Waffle Dog at Frankinbun.

Made of black-eyed peas, mushrooms, and brown-rice flour, it’s the one sausage Gittens makes personally. “Turns out his sister was a vegan, so it hit home for him,” Gittens says. “And the fact that he thought it was ‘one of the best vegan dishes he’s ever had on his show’ really made my year.”

Frankinbun is what Gittens labels a “mom-and-pop joint putting out good food with a unique vibe.” The Chicken & Waffle Dog, featured on the show, is made with two chicken apple sausages baked to perfection in Belgian waffles and served with a side of maple syrup. Fieri called it “amazing.”

“He is very real when it comes to what he likes and doesn’t like,” Gittens notes. “On the show it may seem like he likes everything, but you can really tell that he likes something when he makes up a term for it. His hunger also seems to be insatiable, as he grazes and snacks on your food the entire time you are preparing it.”

After the show first aired last summer, Frankinbun’s sales rose more than 400 percent, according to Gittens, and continue to see a steady uptick after re-airings of the episode.

Grill-A-Burger, a joint that features a bombastic menu of tantalizing flavors, gave Fieri a pleasant burn on his palate with the fieriest burger on the menu, the Devil’s Revenge. The larger-than-your-mouth burger is made with all the heat of fried Serrano chilies, caramelized chipotle onions, pepper jack cheese, and crisp hardwood smoked bacon, slathered with hot and spicy Spontaneous Combustion Habanero Pepper Relish, Sriracha mayo, and chipotle ketchup on a jalapeno-cheese bun. Phew!

“All our burgers are really unique,” says owner Salima Nurani. “Every burger is gourmet. The Devil’s Revenge sounds scary, but it’s not overpowering. It has a nice finish to it.” 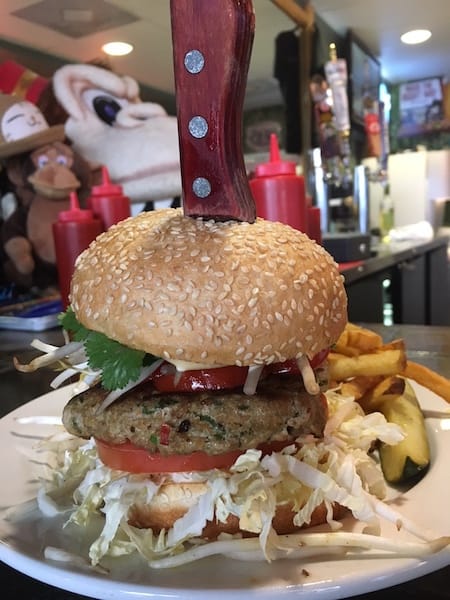 The Buddha Burger is a turkey burger that wowed Guy Fieri, who called it “a gorgeous looking burger.”

It’s no secret that Fieri feels at home in any kitchen, and he made it a point to include Nurani’s family in the episode. “He just talks to you as if you are friends,” says Nurani. “He’s really funny. He’s really a natural. He’s really savvy with words and interactions. You can tell that this is really easy for him, making people feel really comfortable.”

Fieri’s wife had encouraged him to eat more turkey, which inspired him to choose the Buddha Burger, a once daily special that has made it to the permanent menu since the show. The Buddha Burger features an intensely seasoned turkey patty with green onion, cilantro, soy sauce, fresh ginger and garlic, curry, and cumin on a sesame-seed bun spread with sweet chilli mayo and finished with shredded Napa cabbage, bean sprouts, and sliced red pepper and tomato. Guy called it “a gorgeous-looking burger,” finishing the compliment with a high five and a fist bump.

“He’s impulsive and impromptu. What you see is fresh, not scripted. That’s his real reaction. What he says is really what he feels,” Nurani says.

Since the show has aired, Grill-A-Burger has seen a 25 percent increase in sales, says Nurani. You’ll find the restaurant very busy during high season. But don’t worry, hostess Donna Benincasa-Fleckenstein, who is known as the Burger Bitch, will surely find you a seat. “People come to Palm Springs for fun, but they come to Grill-A-Burger to eat,” she says.