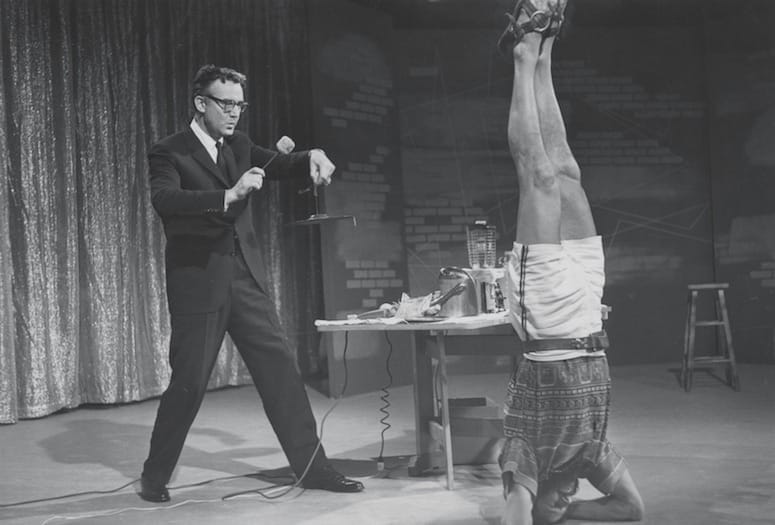 Before there was natural and organic. Before there were “localvores” and “Whole Foodies.” There was Gypsy Boots. Living in the hills outside of Palm Springs. Picking fruit. Bathing in waterfalls. Sleeping in haystacks. Growing long hair and a biblical beard. Displaying the deep tan of a man who spent his life out of doors. Eating only organic fruits and vegetables. Delighting in nature’s bounty.

Born Robert Bootzin in 1914, this son of impoverished Russian Jewish immigrants led a blithe existence that resembled later hippie communes. Except Gypsy Boots and his “tribe” were leading this lifestyle in the caves of Tahquitz Canyon in the late 1940s, about two decades before the Age of Aquarius took hold in the region. Longtime residents recall seeing Boots sell produce on the side of the road at a farm stand emblazoned with irreverent signs that read “Free Advice” or “How to Live for at Least Forever, Probably Longer.” They describe a simultaneously friendly and cheeky character — part shaman, part song-and-dance man, part Johnny Appleseed — who pitched them on the natural life. 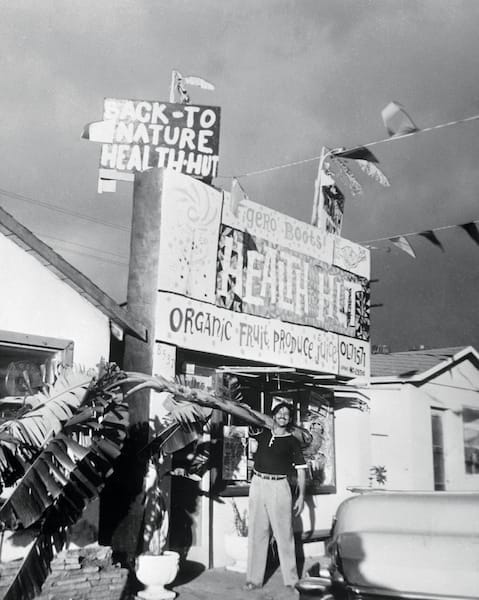 Boots and his band of nature boys and girls were catalysts for the healthy living and organic food movements that surfaced in the 1960s and hit the mainstream during the early 21st century.

Boots was a fixture of farmers markets, parades, and sporting events in Southern California for almost 40 years. He and his statuesque “nature girls” would dress garishly, carrying signs, and ringing cowbells, chanting “Don’t panic, go organic” at the football games of the Los Angeles Raiders and Rams and the University of Southern California. They cajoled parade-goers into cheers of “fig-a-roooo,” in honor of Boots’ favorite fruit.

When I put the word out on social media that I was writing about Boots, I heard from several people who had crossed paths with him — people who saw him playing tennis in Palm Springs or roller-skating around parade routes in Ventura County. I heard from people who bought his carrot juice, odorless garlic, or his Boots Bars, one of the first energy bars on the market. Sports fans shared stories about his antics during games. At some point, this eccentric who lived in trees and caves while eating only plants became a local fixture and eventually an institution. In 1986, the Los Angeles City Council approved a resolution affirming his significance to the city’s culture.

Long before L.A. was bestowing honors on Boots, he grew up in poverty with a San Francisco broom peddler father and a mother who raised her four sons as vegetarians. Boots’ mother still nourished those less fortunate with her homemade brown bread. Little is known about his youth, but Boots often stated that the trauma of his brother John’s death from tuberculosis changed young Boots’ life. 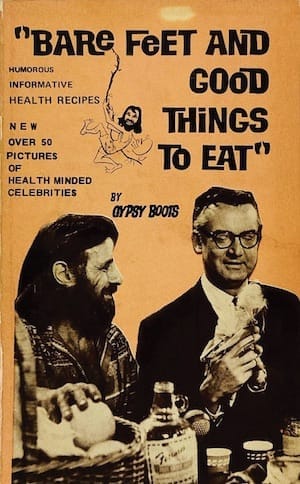 “Gypsy struck out on his own to live in nature very early in life,” his son Daniel Bootzin recalls. Daniel says his father spoke fondly of a childhood spent largely in nature, including hiking Marin County’s Mount Tamalpais.

In response to his brother’s death, Boots doubled down on natural living and healthy eating, hoping to build a robust body capable of standing up to modern toxicities. He studied the German back-to-nature movement called naturmensch (“natural men”) and Scandinavian Lebensreform (“life reform”), both of which favored vegetarianism, nudism, organic foods, and abstention from intoxicants. He adopted the name Gypsy Boots and joined like-minded individuals in the California desert during the late 1940s. Collectively, this group of naturalists brought the ideas of European bohemians to the West Coast. Tahquitz Canyon was the landscape where Boots, health food advocate Paul Bragg, and other naturalists crafted an American Lebensreform, a joyful, madcap alternative to the self-seriousness of its continental forebearers. 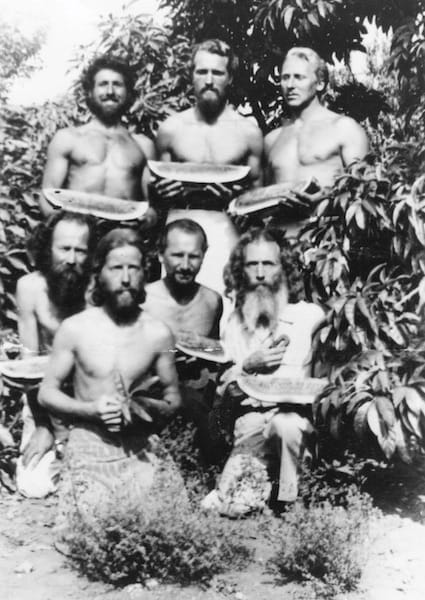 One of the guys in Boots’ “tribe” was songwriter eden ahbez, who honored his friends with the 1948 song “Nature Boy,” which Nat “King” Cole turned into a hit. It topped the pop charts for eight weeks and became a jazz standard.

Eventually, the “Nature Boy” came in from the wild. In 1953, Boots settled down. The high school dropout married his seeming opposite: Lois Bloemker, a straight-laced, educated woman from the Midwest. Together, they raised three sons at their Griffith Park home in L.A.

But Palm Springs was never far from Boots’ heart.

“We went to Palm Springs a lot,” Daniel remembers of his childhood. “I have fond memories of stopping at Hadley’s for date shakes as a little kid. A few times a year, Gypsy would take us all down to Palm Springs to pick dates at some of the date orchards. That was pretty special.”

In 1958, Boots opened the Health Hut on Beverly Boulevard, the first of many health food businesses that he started.

“Around the time of Health Hut, he would go into the salons in Beverly Hills and sell fruit and homemade avocado-and-sprout sandwiches my mom would make,” Daniel recalls. 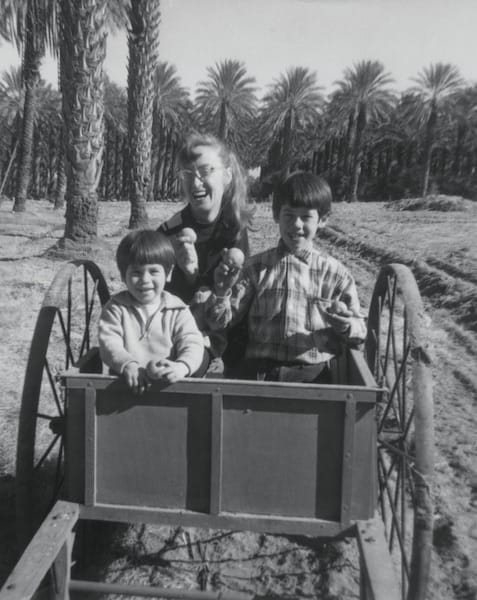 “I know Kirk Douglas [and later his son Michael] were fans of Gypsy,” Daniel says, “and back in the Health Hut days, Gloria Swanson had Gypsy drive her to the beach and talk about health.”

Health Hut enjoyed a celebrity clientele but also proved a bit ahead of its time. It closed several years later. Boots displayed an entrepreneurial spirit throughout his lifetime, promoting several restaurants, selling his produce and wares at farmer’s markets, and even starting his own line of natural foods, Gypsy Boots Products. Daniel, a film editor and director, has helped relaunch Gypsy Boots products to introduce his father’s message of health and happiness to a new generation.

The popularity of the Health Hut brought Boots to the attention of the producers of The Steve Allen Show. One of the show’s bookers and staff writers, Jerry Hopkins, came across Boots — long hair and beard, barely clothed, and engaging in off-the-wall antics — in 1961 in the salons of Beverly Hills. Hopkins booked him as a “kook.”

The “Nature Boy” from Palm Springs was an immediate hit on the show, billed as the loincloth-wearing, carrot-juice drinking “ageless wonder” with caveman hair and a scraggily beard. Boots, then in his late 40s, danced around the stage with a shambolic, child-like exuberance. He’d bang drums, march around with signs promoting fruits and vegetables, recite poetry, juggle produce, swing on ropes, milk goats, and dance around the stage to the delight of the host. He even introduced a fruit drink he called a “smoothie.” In all, Gypsy appeared on the show 28 times, cementing his status as a celebrity and Southern California icon. 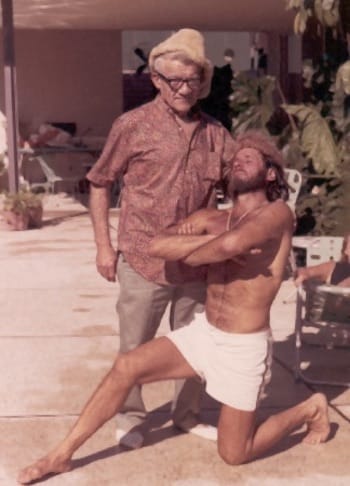 After his exposure on The Steve Allen Show, Boots began making movie cameos. In 1965, he played himself in A Swingin’ Summer, a quintessential ’60s beach film starring James Stacy and Quinn O’Hara. He appears briefly in the D.A. Pennebaker documentary Monterey Pop about the 1967 music festival. In 1969, he played himself in the John Derek drama Childish Things, starring Linda Evans and Don Murray.

Over the next three decades, Boots would make regular appearances on The Tonight Show, The Mike Douglas Show, Groucho Marx’s You Bet Your Life, and Hot Seat with Wally George. Boots also tried his hand as a rock musician and authored several books on healthy living, including Bare Feet and Good Things to Eat (1965), a playful how-to guide for people interested in natural foods, exercise, and leading a healthy lifestyle.

“The ageless wonder” moniker that Boots earned from his appearances on The Steve Allen Show helped preserve his celebrity status, even as his star faded on the national stage. On his 50th birthday in 1964, Boots ran 10 miles barefoot in 120-degree heat from the recently opened Palm Springs Aerial Tramway to the Desert House of Health on Highway 111.

Well into his 70s, he bore washboard abs and would punch himself in the stomach to prove how tight his midsection remained. He could also throw a football in a tight spiral for 50 yards. In his 80s, Boots and his “nature girls” were known for gallivanting up and down the stairs at the Los Angeles Memorial Coliseum, Dodger Stadium, or The Forum, peddling themselves and their wares.

In his later years, Boots lived in Ventura County. He died at the age of 89 in August 2004 at a convalescent home in Camarillo. By the time of his passing, the tribe of Gypsy Boots had grown from a cluster of iconoclasts in Palm Springs into a full-fledged lifestyle adopted in some measure by tens of millions of Americans.