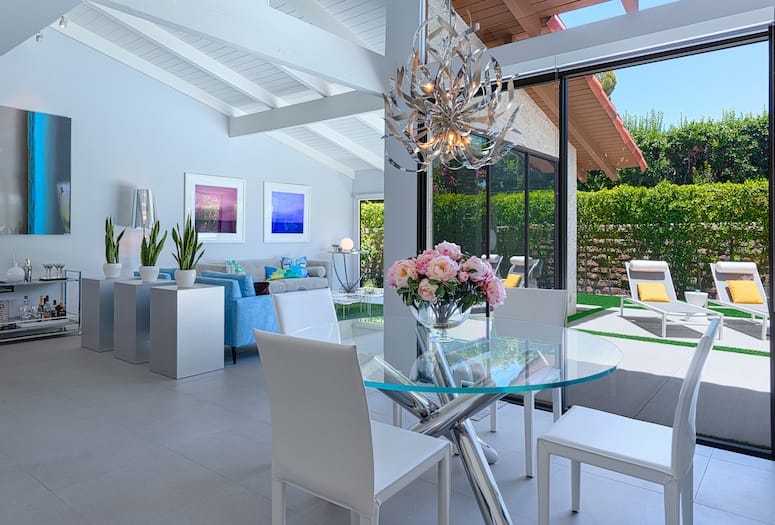 Even though the footprint of the living/dining room didn’t change, the designers visually reconfigured the space to make it feel more expansive. Using one flooring surface throughout, as well as a uniform paint scheme, makes the rooms feel united and spacious. ‪The concept of indoor/outdoor living is further reinforced with interior floors in a concrete color, plus a custom area rug made of artificial turf in the living room‬, says Howard Hawkes of H3K Design.

Everyone loves the idea of creating a home with a seamless sense of indoor/outdoor living. Yet, there’s a perception that in order to achieve that goal you need to have a fairly large outdoor space.

That notion, as the design of this home proves, could not be further from the truth.

Built in the 1970s, the three bedroom/two bath residence located in the Deepwell Ranch community in Palm Springs has a small backyard. Yet Howard Hawkes and Kevin Kemper of H3K Design were able to transform the underutilized outdoor area into a usable space that includes fruit trees, an outdoor grilling and dining area, a lounge area, outdoor shower retreat, and a raised-edge swimming pool and spa.

The homeowner’s wish list for this backyard was long, but designers Howard Hawkes and Kevin Kemper delivered on all counts. A previously lifeless space with large slabs of concrete and a small grass area now features fruit trees, an outdoor grilling and dining area, lounge area, outdoor shower retreat, and a raised-edge swimming pool and spa.

“The biggest problem was figuring out how to fit a decently sized pool into a smaller yard,” says Hawkes. “At a cocktail party, or when you are simply hanging around the pool, people have a natural aversion to a pool edge/waterline. This means that if we were putting a 12-foot by 24-foot pool in the backyard, it really makes the space 15 feet by 27 feet with the natural barrier— making the useable part of the yard even smaller.”

Their solution was to put in a raised pool with an 18-inch “bench” around it. “Not only are you creating a fabulous sitting area, but you also are removing the three feet of natural barrier so people can stand right next to the pool without fear of falling in.” says Hawkes.

The layout of the kitchen remained the same, including reusing the newer appliances. “The owner did not want to open up the kitchen to the living area,” says Hawkes. “He wanted to orient the view to the outdoors.” The gray high-gloss cabinets are from IKEA, the countertops are Quartz Reflections by Ceasarstone, and the backsplash tile is a mix of a natural and a manmade pattern in a linear mosaic.

The desire to have an outdoor shower and to expand the master bathroom from interior to exterior was also high on the owner’s wish list. In addition, he wanted the interior of the home to have very cleanable surfaces that didn’t show dust or dirt—for example, the master shower is open and doesn’t have any glass.

“He also loved light gray as the house’s base colors with only a few darker gray accent walls,” adds Hawkes. “To contrast with that, he also loves using vibrant colors that really pop as accents [and] you’ll see that throughout the house. [And] he really wanted a cozy media room with a large sofa—perfect for unwinding and relaxing after a stressful week.”

No matter where you look — indoors or outdoors — the designers have transformed this home into a luxurious, yet comfortable retreat.

The master bathroom has a custom-made double vanity with zebrawood cabinetry. Hawkes and Kemper also custom designed the sink basins which are built into the Ceasarstone counter. “Wall-mounted faucets were used to make the counters easy to clean,” says Hawkes. “There is even a television in the master bath that is synchronized to the television in the master bedroom so if the owner goes from room to room while getting ready nothing is missed.” A large format white tile was used in the master shower to make the space feel expansive.

The media room had previously been opened up to the living area with double pocket doors. But there’s an attached bathroom and closet so this room could easily be converted to a bedroom. “A large, comfy and stylish sofa was added for lounging and television watching,” says Hawkes. “The coffee table can be raised and lowered, and even enlarged to accommodate dining or snacking while watching television.” The designers reconfigured the master bedroom and expanded it by removing one of two closets, though there is still a large walk-in closet. They also added a separate toilet room. “The master suite is really a retreat into itself,” says Hawkes.