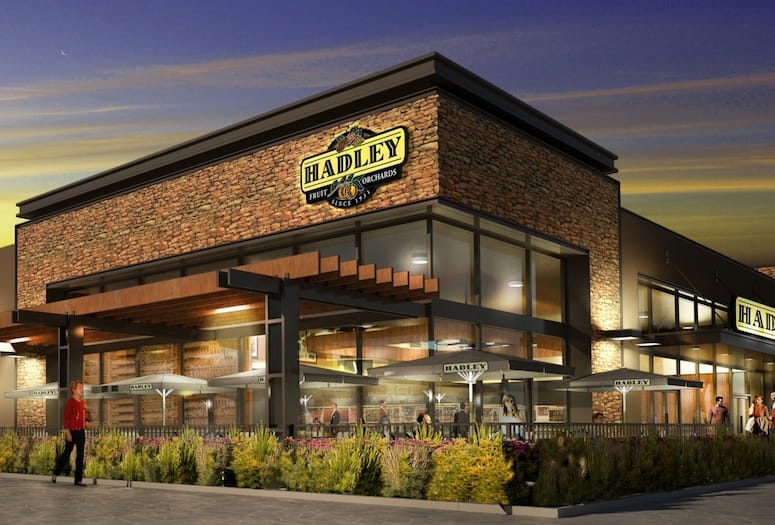 Expected to open in January 2016, the new Hadley Fruit Orchards building will have nearly 12,500 square feet of space, including a 360-square-foot patio.
Rendering courtesy of Morongo Casino Resort Spa

Hadley Fruit Orchards, a roadside institution that has nourished and charmed desert travelers for decades with its delicious date shakes, nuts and dried fruit, will soon move to a new flagship store near its current location along Interstate 10.

The larger store – which broke ground  Aug. 4 and is scheduled to open in early 2016 – will enable the popular destination to expand its product offerings while preserving the rustic atmosphere and heritage of its predecessors. The Morongo Band of Mission Indians purchased Hadley’s retail and mail-order operations in 1999.

“Hadley Fruit Orchards is a Southern California landmark – a must-stop desert oasis that has delighted generations of travelers,” said Chairman Robert Martin of the Morongo Band of Mission Indians. “We strongly believe in Hadley’s mission of providing healthy, high-quality food, and we are excited and proud to continue and build upon that tradition.”

The new store will be located just north of Ruby’s Diner in Cabazon, barely a stone’s throw from the current Hadley Fruit Orchards building on Seminole Drive. The current location will remain open while the new store is under construction. In a nod to founder Paul Hadley Sr.’s colorful hand-painted plywood signs, which lined the highway leading to his store, Morongo also plans a series of Hadley billboards along Interstate 10.

The original Hadley Fruit Orchards opened in 1951 as a dried-fruit packinghouse and small retail shop in Banning. After fire gutted the building in 1953, Paul Hadley converted a pair of World War II-era Army barracks and reopened in Cabazon. A decade later, when Interstate 10 rolled through town, he bought land along the freeway and built the current store.

In January, the new Hadley Fruit Orchards building is expected to open with nearly 12,500 square feet of space, including a 360-square-foot patio. Morongo also plans to reinvigorate the brand’s online store, HadleyFruitOrchards.com, making it easier for customers to shop.

Paul Hadley Jr., whose founder father shepherded the business before selling it in 1978, expressed support for the new plans and said, “I appreciate Morongo carrying on the Hadley family name. I wish them all the best.”