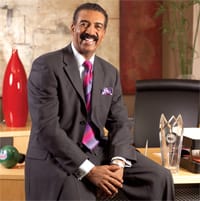 When Palm Springs Mayor Ron Oden was a City Council member, he often held meetings about important issues at Billy Reed’s, a restaurant on North Palm Canyon Drive, because the council had no office space at City Hall.

Interior designer David Reed’s $80,000 project — not a dime coming from taxpayers — even transformed the mayor’s office suite. “Everything — construction, artwork, materials, and furnishings — was purchased with private funds or donated,” says Reed, who offered pro bono services. “The point was to give the City Council members their own offices.”

When you enter the 1,900-square-foot suite — now three separate offices — the hand of an experienced designer appears obvious. The warm colors (mocha, cappuccino, and coffee), maple and black leather furniture, and custom cabinetry combine style and function — and make it easy to forget this is in a municipal building.

City Hall was built in 1957 and designed by several leading architects, including the iconic Modernist Albert Frey. To complement
midcentury roots, Reed went for clean and uncluttered — “classic contemporary and comfortable with lots of curved lines,” he says.

Reed demolished walls and added new ones, creating offices for the mayor, the City Council, and a clerk/receptionist.

Oden’s modestly sized office has three distinct seating areas, including a round conference table and sleek, black sofa.  The focal point is a large abstract painting behind Oden’s desk by Charles Cleeton, the artist whose painting appeared in the living room on the set of the television sitcom Fraser.

Incidentally, Oden has been collecting photographs of Palm Springs’ former leaders — including mayors Sonny Bono and Frank Bogert — as a tribute that will occupy a wall in his office.

The entrance to Oden’s office, off the reception area, makes a statement. Reed designed a glass enclosure with mitred glass corners and frosted glass and a wood door. “It’s a small technique that creates a big feeling,” Reed says.

The original sliding glass doors are the office’s exterior wall. Reed used a Luminette window treatment — a sheer drape that affords light and privacy” — to take advantage of natural light. The council offices also have Luminettes.

“Now the offices reflect the mayor’s personality,” says Martha Edgmon, executive secretary to the mayor and council. “They’re not overdone, yet they’re stylish and elegant.”