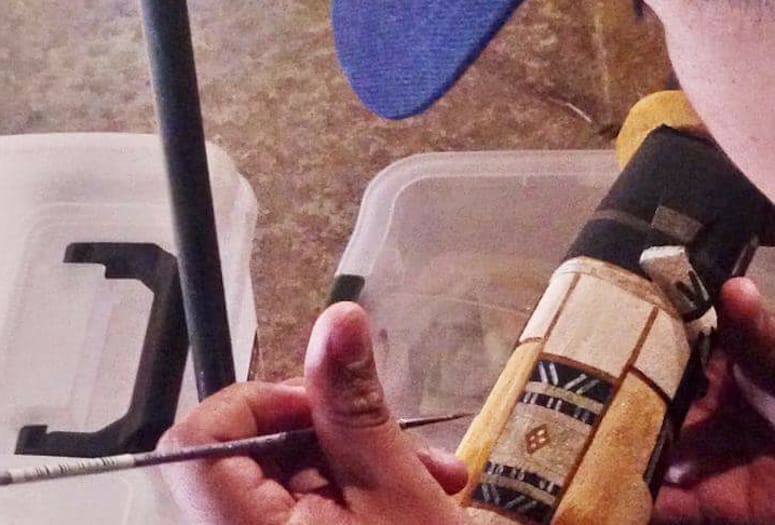 When Hopi artist Darrence Chimerica begins to carve a kachina doll, he doesn't buy his materials from an art store like Dick Blick, but gets them from the land, on the reservation where he lives in Arizona.

The white or reddish driftwood comes from the root of the cottonwood tree found along the banks of the river. And the earth mineral paints are ground to a powder from sandstone found along the mesa. Only his tiny brushes come from an art store.

It takes him four to five hours to create a kachina, depending upon the size and materials. Most of them range from 10 to 15 inches, but he created a 3-foot award-winning kachina doll for a show last year.

Chimerica is one of three Hopi artists from Arizona who will demonstrate how to carve and paint Kachinas, April 2-3, at the Cabot Museum in Desert Hot Springs. He will be joined by Erica Kayqueptewa and Raynard Lalo. At age 15, Chimerica learned the traditional skill from his aunt's husband, Benbrew Atokuku, and he's been improving his technique for the past 16 years. He's shown his kachinas all over the country, from California to New York, and Japan.

Kachinas are made by Hopi Native Americans and came into popularity in the 1930s and '40s, and have been collected worldwide, says Chimerica. They are given to Hopi girls as a teaching tool, like a Barbie.

"It teaches them who they are and their identity with the Hopi people," he explains. "From birth to age four or five, they are given simple, flat dolls, but as they mature, they are given more ornate wooden kachinas."

There are 400 variations shown on Chimerica's website (www.gourdkivaarts.com), all based on Hopi tradition.

After he collects the wood and paints, Chimerica carves the kachina from one piece of wood, from head to toe. He only uses hand tools like knives, chisels, and a coping saw.

"There are no electric tools used on any of the dolls that I make," he says. "With hand tools, you have more control, with how deep the cuts you want to make or how fast the strokes." For the Cabot Museum show, Chimerica's hands worked overtime in making 15 dolls to sell there. Once it's carved, he applies the eyes, ears and mouth with wood glue, and then covers the entire doll with a whitewash paint. The minteral-based paints are all mixed with hot water, and a juniper sap sealer is added so the paint doesn't rub off while handling the doll.

"I like to keep my paints pure without mixing. Whatever a color comes out, I like to use it that way," Chimerica explains.

One time, he was jogging on the reservation, and his dog, a blue heeler mix named Honmana (Bear Girl in Hopi) stopped to dig something up. One the way back, he looked into the hole and found that Honmana had dug up a piece of turquoise sandstone block.

"When I brought it home and ground it down, it came out to be a good color–turquoise," he says. "If it wasn't for Honmana, I wouldn't have found it."

After the doll has been painted, Chimerica adds feathers, horsehair, or goat's wool. Some feathers he gets from the area, like duck, pigeon, quail or grouse. Bluejay feathers are added for color. There are instances when feathers or wool are supplied from customers that he meets at shows like the one in New York.

"One woman from France told me that she owned a goat farm. We started talking and she offered to send me some goat hair," he says. "It's really fine and soft."

Others have given him parrot feathers from a pet who sheds. But certain feathers are not used because they are protected, like eagle, hawk, roadrunners and owl, he says. The same materials and process are applied to a 13-inch Kachina as a 3-foot one.

The price of his Kachina dolls range from $45 to $700, depending upon the time and materials used. His 3-foot Shalako, a water kachina that he carved from a single piece of cottonwood root, won him first place in his division at the Southwestern Indian Arts show in Santa Fe last year.

The same materials and process are applied to a 13-inch Kachina as a 3-foot one, only taking longer to create and more materials. It sold for $8,000 to a collector. Now Chimerica plans to carve another large one since he has more materials.

"Most people are looking for something in particular. For example, if they have a family member who is sick, then they will buy a badger doll, which is a healer. It will kind of help them in prayer so they their family member will get well," he says.

"Or they will buy a hummingbird kachina for someone who is happy and energetic. It really depends upon the person, their personality and everything."