Hangover 3 Means Goodbye to The Wolfpack 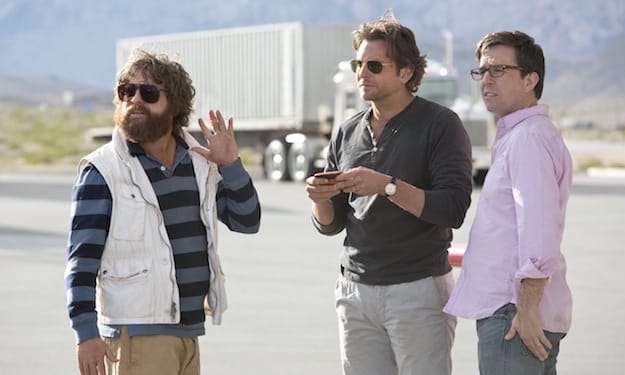 The first time, we all figured it was just an unfortunate run of bad luck for three friends. The second time it happened, we thought, “What idiots!”

Now audiences are back for a three-peat with Alan, Stu, Phil, and Chow. Strap on your seatbelts, ladies and gentlemen; it’s going to be a bumpy night.

The Hangover 3 is the final hurrah for the Wolfpack. Married guys Doug (Justin Bartha), Phil (Bradley Cooper), and Stu (Ed Helms) are living peacefully with their respective families. Any evidence of their wild nights in Vegas (Hangover) or the Orient (Hangover 2) has been destroyed.

But Alan (Zach Galifianakis) is living fast and hard. He’s off his meds and suffering a psychological downward spiral. Alan’s buddies rally to the cause to help him make it through. But that support isn’t without incident — especially when the shady and childlike, Mr. Chow (Ken Jeong) rears his head. The gang’s shenanigans lead it back to the scene of its original sins — Las Vegas — for a raucous finale.

"This one is Alan's story," said Hangover director Todd Phillips. Recently, at the film’s junket, he and his cast dished secrets about the final installment of the franchise, which landed in theaters May 23.

"And this one answers all the questions,” added Jeong. “You want to know what happened to Chow? You'll get that answer, real quick, and in spectacular fashion."

Galifianakis describes his character’s crisis in usual comic detail: "Alan has to be told he's having a midlife crisis because he's not aware of it," Galifianakis explained. "He has no idea. I guess it's more like a coming-of-age crisis, but it's hard to come of age when you're already over 40."

As Alan attempts to gain understanding of his existential dilemma, Leslie Chow is breaking out of jail. The two men’s paths cross, resulting in some R-rated adult fun.

The Alan-Chow hijinks aren’t the only repeat in the Hangover formula. Once gain, Doug is victimized and requires rescue from his friends.

"Yeah, Doug gets screwed again," Bartha joked. "They know where he is this time; they just don't know how to get him back. I think that even if this wasn't the last movie, it would probably still be the last time that anyone ever saw Doug hanging out with these guys. I think he'd be crazy to pick up the phone next time they call because they've gotten him into so much trouble already."

But even with the outrageous plot twists and turns, The Hangover 3’s director is sentimental about bidding farewell to his leading men in this film – despite their very bad behavior.

"A lot has happened since shouting 'Action' on day one of the first Hangover," Phillips explained. "It's fun for us to look back on five or six years and three movies, and think of all the insane things we did and the places we went together. When we came to the last scene of the last day, I certainly felt that something special had come to an end.”